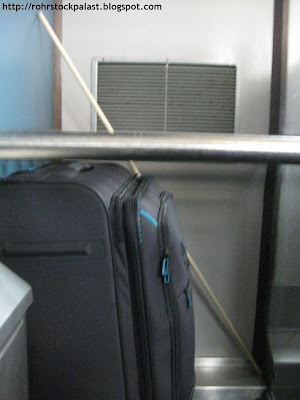 A few days ago I was travelling by train. I had a rather huge bag with me, and so I looked for a free space in the luggage area. To my big surprise, I came across the sight which you can see in the (unfortunately not completely sharp) picture above. I swear that this is neither an artificially arranged picture, nor is the cane, which you have undoubtedly already spotted, mine. I usually don't carry around any canes without a bag. I looked at the unexpected sight, stunned.

Then I put my bag away, careful not to bend the cane, and went to find a seat. There I sat for a moment, thinking of what I should make of my discovery. It didn't take me long to remember that I had a photo camera with me. I figured that this was a find too good to waste. And I needed a proof of this strange story.

So, I went back to my bag and got out my camera. I didn't know to whom the cane belonged, though. And I didn't want to draw any attention to the fact that I was photographing it. So, I pretended to look at pictures which I had already taken, deactivated the flash and quickly took a photo.

Back at my seat I wondered. Who of my fellow travellers was the proud owner of the cane? Maybe the elderly people at the table nearby? No, they looked too conservative. Well, or maybe that was just prejudice on my behalf? What about the friendly looking young guy a few rows behind me? Hmm, maybe. If there really was another kinkster in my train coach, had he or she ever read our blog? I have to admit that all these thoughts were thrilling somehow. It's not that I haven't met other kinksters, but musing about a stranger on a train who might be a like-minded spirit felt special and adventurous.

Or maybe, I did wonder, the cane wasn't used for any kinky activities at all. As far as I could see, it seemed to be a peeled rattan cane, about 8-10 mm thick, approximately 100 cm long, very straight, but without ground ends. It definitely looked suitable for administering a good thrashing. But perhaps it was usable for other things as well? Gardening maybe?

I'm not sure. Has anyone got an idea? Do you think I really stumbled across a like-minded spirit who shamelessly (and why should he or she be ashamed) carried around his or her favourite or newest toy? Maybe he or she assumed that only fellow kinksters would spot what this strange stick was for, anyway? Or was it all completely different? Has anyone ever been in a similar situation and asked him- or herself whether what he or she saw really was what it seemed to be?

I didn't even find out whom the cane belonged to. It was still standing in the luggage area when I had to leave the train. But it's appearance definitely made for a more enjoyable train journey with a slight Miss Marple flair. Even though I, in contrast to good old Miss Marple, didn't manage to solve the riddle. Ah well, I didn't have a Mr Stringer to help me, either. And sometimes unsolved riddles can be much more interesting than solved ones, anyway!
Posted by Kaelah at 4:25 PM

If you have an interest in a kinky activity it's easy to attribute a kinky use to an otherwise straightforward thing. As you say there could be any number of innocent explanations for the presence of a rattan stick. I had a similar experience when I saw a couple buying a large bunch of those long twigs that people use for decoration in their homes. I automatically imagined them being used on each of their bottoms but they were probably destined to sit in a vase in the corner of their living room. It's nice to imagine things though and it enlivened my day no end.

As Simon says, delightful as it may be to let the imagination run riot, there is usually a simple explanation for most potentially “kinky” things you encounter in day-to-day life. For instance, one of our local eating establishments had, until recently, a huge vase of roughly one metre long, peeled rattan canes in its foyer. When I casually asked a member of staff about the significance, he said they were purely for decoration, but that quite a few people had asked him whether they had any hidden meaning. “I guess maybe they thought they were kinky!” he said.

A radio amateur (radio ham) friend of mine often carries around a cane or two on his business travels. He likes to spend the evenings in his hotel working QRP (low power radio, for those of you not in the know) and in order to do so, hangs an antenna wire out of the hotel window or off a balcony. The canes are used to support the wire, holding it out from the wall. Well, that's his story anyway.

Changing the subject, you were asking about whether you should be “Tweeting” - I think that's best left to the (feathered variety of) birds. I just don't know how you find the time for everything you do already, what with researching for your PhD (subject matter?), writing your blog, responding to blog comments, having kinky fun and (presumably) holding down a job (apologies if I have missed or added some activities here). Do you find time to check your ~at~gmx~dot~de e-mail among all your other activities? Surely if you start tweeting and twittering all the time you will be spending even more time on a keyboard and will have even less time for living and enjoying your already full life! No offence intended – just my opinion!

Best regards and keep up the blogging, etc.

The problem of being kinky is indeed that the most mundane looking items are checked for their potential as pervertibles. But if the owner of this cane was indeed kinky, he was probably employing the tactic of hiding in plain sight.

Concerning Miss Marple: I am not much into crime fiction, but I often find the titles of these novels hilarious. Maybe we can find something appropriate for your little episode, too.
Like "The Cane of Doom", or "Caning on the Orient Express" (or German Inter City Express).

Is the Story a new Spot for the DB?

Or just the product of a boring train ride?

What makes a cane in public so interesting? Only your imagination is not it? Usually I split canes in a map pocket, but sometimes only loosely clamped under his arm. More attention, however, you get paid with a carpet beater! : D

Are you going on your next ride a carpet beater and then wait to take to read a fantastic story about the Net?

At the weekend, incidentally, was in Hamburg Spankodrom, maybe just someone was on the way Catonium?

When I was still travelling for spanking weekends taking with me many of my toys, I had to experiment quite a bit - trying a small golf bag, thinking about rifle cases (too expensive), or a self-made box. The problem was the length of the canes.
I finally hit the solution in a fishing gear online shop. They had every length of flat bags, but all of them oddly shaped (One end wide with pockets on both sides, the other end rather small). They also were divided in two compartments over the whole length.
Apart from the strange shape, they were ideal for transporting everything up to dressage whips of more than one meter length (plus my change of clothing etc.)
Why I tell you this?
The stuff rattled quite a bit when I took it down from the overhead rack, and I often wondered, whether any fellow kinksters were around guessing quite correctly what I was carrying with me - especially in winter.
But there is ice fishing of course :-)))!
The really exiting moments always came when I needed something out of the two long compartments. One of them contained my spanking gear, the other one my weekend utensils. I never knew which was which. Fellow train passengers were up to a treat - or not.
Well I never met anyone felloew kinkster.

Well I can assure you that rattan canes of that length are of no use in the garden. They are too flexible and offer little support to a plant. Bamboo is cheaper and better for the job. At least that eliminates one possibility.

It was a lovely way to pass the time on a long train journey, and I'm so glad you were able to take a photo.

Yes, of course it was a disciplinary implement. Some naughty person is being made to carry it outside their luggage, and will be dealt with one their destination is reached.

I think Hermione is right. Imagine being the person who has been made to carry that cane in public. What feelings would they have sat in the train, watching you looking at that cane, photographing it too. And all the time, knowing that when they reach thier destination, they are going to bend over and suffer. I think it's great looking around and wondering if others are 'kinsters' Mistress and I often sit in coaffee shops people watching and will look at each other wuith raised eyebrows when we see something that we think relates to our lifestyle. I just hope Mistress doesn't read this and come up with the idea of making me carry a cane outside of our luggage!

@ Simon:
I absolutely agree with you, it is great to let one's imagination run wild! :-)

@ doclash:
Using rattan canes to support a wire? What a waste! ;-)

I don't join Twitter at the moment because I'm indeed very busy right now. Family responsibilities, time with friends and housework were even missing on your list. Right now all I manage kink-wise is to keep up the blog, follow some other blogs and reply to e-mails. The latter often takes a while, though, since I tend to reply to e-mails in blocks about every two weeks or so when I'm busy. So I have to ask everyone who sent me an e-mail for a little patience. :-)

@ Fenris:
Yep, the titles of some crime novels are indeed cool. How about using a real Miss Marple novel title and changing that one a bit? “4.50 from Munich”? ;-)

@ Spankingfreunde:
Of course it is only the imagination that makes the sight of a rattan cane exciting. But, isn't imagination wonderful? In my opinion it is what kink is all about.

@ Donpascual:
That sounds a bit like “Kinky Russian roulette”. ;-) Thanks for sharing your experiences!

@ Spankedhortic:
Thanks for sharing your point of view as an expert! I couldn't quite imagine that a peeled rattan cane of that size could really be used for gardening, but it was the only possible explanation (despite of the kinky one) that came to my mind. So, maybe the kinky explanation is indeed the correct one...? :-)

@ Hermione:
I think I'll go with that explanation. It sounds absolutely plausible. :-)

@ Respecting Mistress:
If your Mistress reads this and draws inspiration from it, I am curious about your adventures which might then unfold. I will surely read about them on your blog one day! :-)