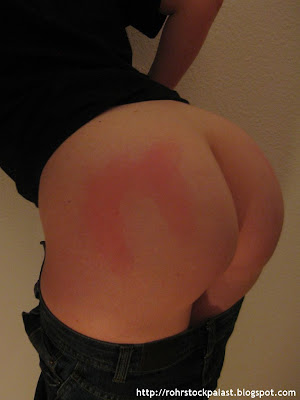 Greetings to all my fellow geeky kinksters. It's 3/14, 1:59:26 pm German time. Time to wish a Happy Pi Day to all those of you who are celebrating this special holiday. Being the kinky spirit that I am, I didn't bake a Pi pie but instead imprinted a pi on my round rear cheek, as you can see in the picture above.

In my opinion, numbers are great, and pi is a special one. So, why not use Pi Day for a kinky celebration? There are lots of options for wonderful Pi Day spankings! For example, with 3.14 swats you can imprint a pi on your partners bottom. That's three strokes for the main lines, plus a little one for a pretty arch at the end.

For all those who find 3.14 strokes too few, there are other options as well. You could, for example, celebrate every single digit of pi! Three strokes with the belt, followed by one with the crop, four with the paddle, one with a switch, five with a wooden spoon, nine with the cane and so on. Bottoms, be careful what you wish for, though! As you all know, pi has an infinite number of digits with no recurring sequence (at least not among the first over 200 billion digits which have already been calculated). And, the more geeky your top is, the more digits he or she might remember. Or, he or she looks them up somewhere or simply insists that you have to know them, which might get you into even more trouble.

Other possibilities are either spanking little circles, if you have a fitting implement for that, or, for the switches among you, a group spanking with all participants standing in a circle. That way, everyone can give and receive at the same time. And afterwards, pie for everyone to round up the day!

Has any of you ever given or received a Pi Day spanking? Have you any other ideas for a kinky celebration of this special day?

P.S. Except for Pandora, who kindly took the time to comment on my last post, I haven't heard any opinions about Twitter, yet. It would be great to know whether Twitter provides any additional value from your point of view or not. If you have an opinion on that topic and can spare the time, please leave a short comment. Cheers!
Posted by Kaelah at 1:59 PM

What is Pi-day standing for? The mathematics is clear (to a point), but what are you celebrating?

Besides my thirst for knowledge, your ideas what to do with this universal number in terms of kinksterism fulfil the usual high standards of your posts, Kaelah.

Happy Pi Day to you.

We refuse to have anything to do with tweeting. Come see us. Drag up a chair. We can chat.

I didn't even know that a Pi-Day exists. Is there a day for Euler's Number as well?
When I was in school, we had some pretty awful math teachers who unfortunately were unable to instill the love for mathematics in me. Or does one have a love for numbers like one has a kink?
Nevertheless, I really want to comprehend the logic and beauty of mathematical concepts.
I found a really good site http://www.khanacademy.org
which features loads of videos with explanations and proofs, ranging from the simple to the complex (for me, at least). Other sciences are covered as well. Absolutely amazing. The explanation of Euler's number for example is great. I really wish we had explanations like this in school.

We don’t have a Pi day in the UK, as we would need a 14 month year!
I guess we could imagine a Pi day, which mathematically would be represented by 3.14 x i (where i is the imaginary number whose square = -1), but I’ve no idea how you would turn that into a spanking. Maybe you choose any number of strokes and imagine you are giving/receiving them. You could try it on the phone.

Kaelah, I would have Tweeted my comments on Pi Day (Happy! to you, too!), but I don't have one. A Twitter acount, that is. And next year, I will be wishing you Happy Pi Day in this forum as well, for I still won't have a Twitter account. Same for the year after. And thereafter. No Twitter. Ever.
I only had Towel Day marked up within my radius of celebration, however it appears that Pi Day would be a good addition to anyone's calendar. Thanks for rounding out your readers' horizons!

Happy pi day! any excuse for a celebration, I say:)

Never heard of Pi Day but any excuse for a celebration is fine.

No tweeting or facebooking for me.

It was actually half-Tao day.

Thank you all for your Pi Day greetings and for sharing your opinions about Twitter! It seems like Twitter doesn't offer much added value for our readers. That was the most important aspect for me when I thought about getting an account. But it obviously is a way of staying in contact with fellow bloggers and friends in the online community. Since having a Twitter account doesn't seem to be important for the blog, though, I'll take some time to think about whether (and how) I can manage the information flow and whether it is a good idea for me to join Twitter.

Pi Day is of course not an official holiday, and it is not my invention. The first big Pi Day party was held at the San Francisco Exploratorium in 1988. The mathematical constant pi has a lot of geeky fans and some of them celebrate Pi Day with round pi pies.

@ Donpascual:
It's just a day to celebrate the beauty of pi, usually with a pi pie. Just some strange fun for geeks, actually! :-)

@ Our Bottoms Burn:
I can see that Twitter makes sense for people who can't easily drop over for a personal chat because they are, for example, living in another country. But you are of course right, personal meetings can be much better if possible.

@ Fenris:
I guess it has partly to do with personal preferences in general, but I think that good teachers also have the ability to raise their pupils' interest for certain topics. And bad teachers can make their subject look much less attractive as well.

I guess FetLife really would be too much for me to handle, even though I know that there are some nice people on FetLife! But there seems to be a lot of drama as well, and I don't need that right now.

@ Steve from Kent:
Your mind seems to be even geekier than mine! I prefer real spankings to imaginary ones, though. Well, at least until the spanking starts... ;-) Becoming addicted is exactly what I am afraid of when thinking about Twitter.

@ Val:
I'm always happy to come up with new ideas for celebrations that involve spankings. ;-)

@ Spankingfreunde:
You are right, one shouldn't need a holiday in order to have some fun! But, hey, geeky and kinky – that's simply too good to miss out on it! ;-)

@ Hermione:
I hope you had a wonderful Pi Day! :-) And yep, any excuse is good, especially if it leads to a geeky and a kinky celebration. ;-)

@ Ronnie:
I know that you celebrated Steak and BJ Day instead (well, without the steak, as far as I remember it...). ;-) As you say, any excuse for a celebration is fine! :-)

@ !:
Hi, my fellow geek! ;-) So, twice as many strokes on 6/28 then? The MIT has found a good balance between pi and tau, by the way. As you can read on Wikipedia: "The Massachusetts Institute of Technology has often mailed its application decision letters to prospective students for delivery on Pi Day. Starting in 2012, MIT has announced it will post those decisions (privately) online on Pi Day at exactly 6:28pm, which they, via cartoon allegory, have called 'Tau Time', to honor the rival numbers Pi and Tau equally."

That photo is the best celebration of the geeky absurdity of "Pi Day" I've ever seen! :-)

Why not have a Pi Week? A good approximation of Pi is 22/7, i.e. you could be given 22 swats every day for 7 days, possibly with a different implement each day.

@ Indy:
Thanks a lot for your kind compliment! :-) I was glad that it worked out (at least well enough so that I could use the photo) because imprinting a Pi on one's own bottom isn't that easy. ;-)

@ Ben:
That's a wonderful idea! It's always nice to meet fellow a geek and kinster. :-)