Our First Spanking Party in Germany (Part 2):
Introducing the Cane

This is the second part of our report about our first spanking party in Germany. You can find part 1 here. As in the first post, Fenris's comments are bold and Ludwig's italic.

Fenris: Of course I was eager to play with my kinky mates and I was very glad that Kaelah took the lead and asked me if I wanted to try out some canes. I know that Kaelah and Ludwig have a very intimate relationship and was afraid to cause an embarrassing situation. I did not want them to play with me just out of politeness so I just waited and gave them the possibility to back out and just enjoy the evening without playing with me.

I have to say I was very honoured that Fenris had asked us (he would have been okay with being topped from Ludwig, too, but Ludwig let me do the honours since both Fenris and he aren't really into M/M fantasies) to introduce him to a more intense spanking session and to the cane. Trust is a very important part of my kink and being trusted like this made me very happy. 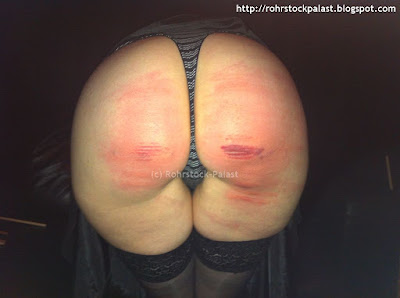 Fenris: Even while just going upstairs I felt great. As I totally trusted them, I was sure that my first real experience was going to be a good one. As Kaelah said, I am not into M/M, but getting topped by Ludwig would have been totally ok for me. I was glad we were in a booth with a curtain, a public play would have been a bit overwhelming for the first time.

[Ludwig: I am not phobic about M/M play, but neither do I get anywhere as much out of it as I get out of M/F (or F/M, for that matter). So I was happy to leave all the fun to Kaelah, who would appreciate it more.]

We had brought a bag with almost all of our toys and I began trying them out on Fenris while he bent over a couch. We started over the clothes since I wasn't sure whether Fenris felt comfortable pulling his trousers or his underpants down. Fenris looked like a kid in a candy store and eagerly tried out all the various implements.

Fenris was also game for a back whipping and so I secured him with a chain that was hanging down from the ceiling and whipped him with different floggers and whips. Of course I couldn't resist introducing him to our mean little rubber flogger, too. I really got into a flow, while Ludwig was watching us, well aware of the glee in my eyes. I alternated between forehand and backhand (after all, I had to make sure that both sides of Fenris's back got equal attention), happy to realise that my aim was good both ways. After he got a taste of how the rubber flogger feels like, Fenris exclaimed: “This one is really mean. Now I understand much better what Ludwig went through in the football bet clip.”

After the back whipping we gave Fenris a break and Ludwig showed him how to handle a cane. I was the training object. Of course I couldn't restrain myself (I am an exhibitionist after all) and so I asked Ludwig to make his final stroke really hard to show Fenris how such a stroke looks like for real. Then it was Fenris's turn to handle a cane. He had never caned anyone before, but proved to be a natural talent with a good aim.

[Ludwig: It had been some time since I had last used a cane, so initially, I was a bit rusty myself. As well as that, I always emphasise that everyone has their own caning technique, so I encouraged Fenris to treat my demonstration and the hints I gave him as suggestions, rather than as a strict: "This is how it's done!" Some people prefer to use a strong wrist flick (as I do), while others find that keeping the wrist stable and using only their arm to generate pace comes more naturally to them. Some people like to stand very upright while they swing the cane, while others (like me) have an almost martial arts-like stance. Whatever your style is, the important thing is that you feel comfortable and confident and that your aim is accurate.]

Fenris: Actually, I felt much more insecure when it was my turn to use the cane. I identify as a switch and felt extremely honored that Kaelah let me top her. I would have been more than happy to get topped by Kaelah and did not expect her to let me top her. Actually, this was the first time I held an implement in my hand (by the way, I bought my first cane at the party, a peeled straight junior cane). Kaelah and I have a very similar kink and I valued her trust but was afraid I could do something wrong and actually hurt her. It may sound strange but if you always dreamed about something, you sometimes just do not expect the mundane problems that suddenly arise. Where should I hit? With how much force? I was glad that Ludwig was my mentor and I just tried to imitate what he did.

[Ludwig: I can relate very well to Fenris's initial insecurities. Despite the fact that most of my spanking fantasies were "toppy" ones, I had made my first practical experiences with spanking on the bottom side, because I felt I should know what that is like before I topped anyone myself. And when I did first play as a top, I felt more insecure than during my first play as a bottom! I think it comes with the responsibility you feel as a top. As a bottom, your role is a much more (though not entirely) passive one. When you are topping, on the other hand, you are the one wielding the implement(s), and you are responsible for the bottom's well-being and safety. That can be quite overwhelming for a novice. Fenris needn't have worried, though, because he was making rather a good job of it right away.] 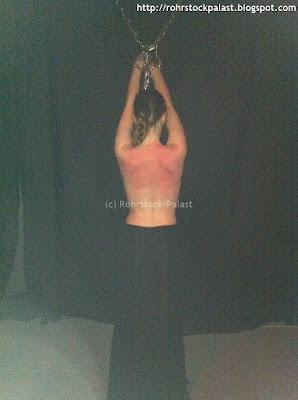 After that, I was tied to the ceiling and received a double back whipping from Ludwig and Fenris. Being whipped with two floggers was a very enjoyable experience. The two guys proved to be a good team. Of course we took a picture of the results, as we had done with Fenris, too. Then it was time for a break. Ludwig and Fenris went downstairs and got us some refreshing non-alcoholic drinks (I am sure you have heard of the important rule “Don't drink and spank.”).

Being refreshed, Fenris was up for a second round. Ludwig wasn't in the mood for being on the receiving end of a spanking, thus he preferred to be an observer only this time. I was a bit more self-confident now, having gained a good feeling for Fenris's limits. Fenris had also told me that he was comfortable being spanked with his pants being pulled down (he had already bared his bottom in order to get some pictures of his marks).

[Ludwig: If there is one thing I regret about that particular party, it's the fact that I did not play on the bottom side at all. I considered it, but I had been feeling a bit ill that day, all day long - had it not been for our plans to visit the spanking party, I probably would not have left the house at all. So I decided against trying out a few strokes on the bottom side as well, which was probably wiser. The downside was that I felt like I did not "fully" participate in the event. And I did feel a bit left out at times, because it was Kaelah and Fenris who got most of the action, while I was only joining in as a top occasionally. Nonetheless, it was an enjoyable evening for me as well, and the next time we played with Fenris, I felt better and fully took part in the action myself.]

First we started with some more backwhipping, though. But then I cheerfully told Fenris: “Well, drop your pants, then, young man, and bend over.” For this final part of Fenris's initiation I had decided to give him 12 cane strokes. I went a bit harder this time, pushing Fenris's limits. Thinking back to my very first spanking experience I knew that he wanted a “real” initiation and some marks to show afterwards. Fenris took the strokes very well and so I decided to put him up for one more final challenge.

When it was time for the last stroke, I told him that I would like to do this one really hard if he was up for it. Fenris had told us that more severe scenes in spanking films made him feel uncomfortable and I wanted to show him that severe strokes could be okay after a warm-up, being sure from his reactions to the previous strokes that he could take it. Fenris looked a bit scared, but after a moment answered that he would give it a try. So I stepped back, took aim, and brought down the cane really hard. Fenris definitely struggled with the pain, but he was still very brave. I gleefully watched his reactions and waited for him to catch his breath. Then I congratulated him on his first intense caning. Now he definitely had something to show for it, too, a lovely set of dark stripes on his bottom. 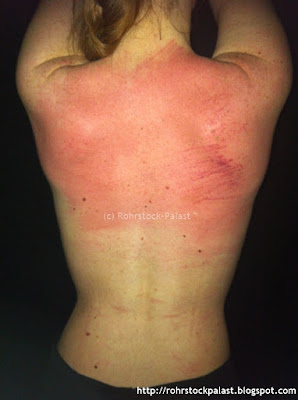 Fenris: Reading about Kaelah’s feelings now, more then two years later, makes me relive the moment. I did not realize that Kaelah enjoyed our play as much as I. The caning on the bare was the first time I struggled with the pain.

I remember saying in the midst of the caning „Maybe the abolishment of corporal punishment wasn’t such a bad idea“ to which she replied „Well, it seems to work then“. I was high on endorphins and was a bit proud that my first spanking did include a caning. Kaelah was very good at reading my reactions and waited long enough between the strokes to let the pain fade away until I was ready for the next stroke. After the caning I probably felt like a freemason after his initiation ceremony. I had experienced what had occupied my mind for about twenty years.

[Ludwig: A couple of days later, Fenris wrote us a very nice email in which he thanked us for having helped him to make a dream come true and act out something about which he had fantasised for, literally, decades. It is very gratifying to be part of someone's first BDSM session and know that they've had a great experience. Actually, it is probably one of the best things to come out of this blog, among so many other good things - proof that something as silly as a kinky blog can indeed change people's lives, in a subtle yet real way.]
Posted by Kaelah at 8:07 PM 10 comments: