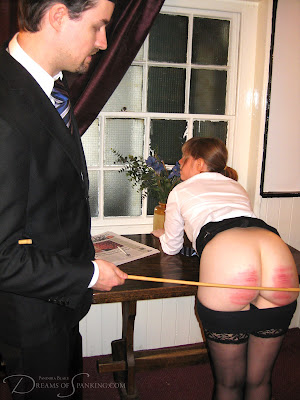 Dear readers, it’s been a while since we’ve published a post, and I’m sorry to say that this will probably not change until the end of this year. As I already mentioned, we are currently buried with work, plus the stress of a family life within the pandemic.

But Pandora / Blake gave us a reason to write at least this one post: they have edited a video clip which we filmed more than a decade ago and released it for free on their site Dreams of Spanking. We made an agreement all those years ago that the clip would be a free treat for their and our followers.

So here it is: Proof of Innocence

I wrote about the experience of filming the video (plus a second one which will be published this year as well) in this post from 2010. I had written the plot, and Thomas Cameron, Pandora / Blake and Ludwig brought this very special fantasy of mine to life with their passion and dedication.

Seeing the finished product right now sends me on a trip down memory lane. Making that video was a very exciting experience, but the prospect was scary, too, and it brought me to my personal limits. Why? Because this was not only the first time I made a spanking video with someone else than Ludwig (and right away with the famous Pandora / Blake and Thomas Cameron!), it was also my very first spanking experience with someone else than Ludwig, and the whole dialogue was in a foreign language for me. Oh, and last but certainly not least, the scene featured a fairly severe cold caning as well!

Fortunately, it turned out to be a good experience, because everyone involved made me feel comfortable, safe and cared for. I remember how much time we put into preparing the shoot, with Pandora / Blake and me exchanging e-mails with my story ideas. I remember how nervous I felt and how exhausting the day was, but also how happy I was about the beautiful filming location and the shoot turning out so well. I love the resulting video, especially the chemistry between Rosemary and Adelheid (Pandora / Blake’s and my characters). 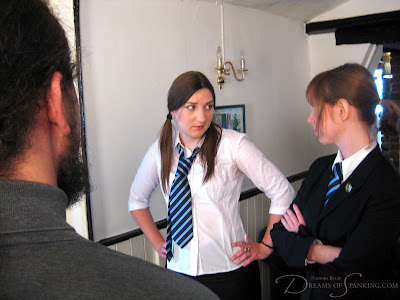 Looking at the video reminds me how well Thomas brought to life my fantasy schoolmaster, calm and caring, with a beautiful British accent. Having him as the second top I ever played with was great, because he was just as calming and supportive behind the scenes as his character is in the story. And Pandora / Blake were a wonderful co-bottom, very reassuring when they were behind the camera and easy to interact with in character. I love how they role their eyes, the shocked look on their face as they inspect my marks and how we finally start getting along. Not to forget Jimmy Holloway behind the camera, who made me feel comfortable as well. And of course Ludwig, who knew that the prospect of the shoot made me quite anxious, also did his best to make sure it would be a good experience.

The story itself is, in a way, a simple schoolgirl CP roleplay. And yet I think it is different to most schoolgirl scenes you will find – and it is still very much up my alley. Adelheid is a lot like I was back when I was in school: an eager beaver, a goody two-shoes and not exactly the most popular pupil among her peers. Even the story of the failed art project and Adelheid’s disappointment that her teacher didn’t give her a hint that she was heading in the wrong direction is something I experienced in real life. So I put a lot not only of my personal kink, but also of the real me into that scene. And I hope the viewers can feel this, despite my poor acting skills and the difficulties that come with making a film in a foreign language. The good thing is that the real nervousness I felt during filming actually fits Adelheid’s character very well, since she finds herself in a very new and scary situation as well.

And today? Pandora / Blake and Thomas Cameron are not a couple anymore, and Ludwig and I are a married old couple. Dreams of Spanking has become a successful site for ethical porn. Pandora / Blake is an actress, producer, writer and activist, plus a parent. Ludwig and I are parents, too. At the moment kink doesn’t play an important part in our lives anymore. Taking all that into account, watching the film makes me feel as if it not only comes from a time very long ago, but almost from an entirely different life. And yet, it is wonderful to take a look back and to realise how much I still like what we created back them. Thank you, Pandora / Blake, for turning it into a finished video!

So, I’m using this opportunity to say hi to your all and I hope that you enjoy the trip back in time like I did. Yes, the video quality wasn’t as good back than as it is today, but that was 2010, you know? Right now, in a world that faces a pandemic, war, environmental catastrophes and economic challenges, I think it is all the more important to share good things and to make sure we don’t lose our smile. If the clip brings a smile to your face, I think it was worth our passion and effort.

Chances are good that you won’t be hearing much from us during the next months (maybe until the second clip from our shoot is published), so please stay safe until then and have a wonderful spring time despite of what is going on in the world. 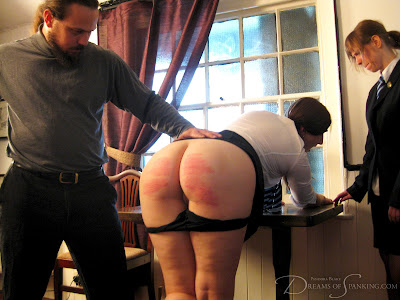