Leia-Ann Woods doesn't really need an introduction. She is one of the most prolific spanking models and creative minds from England, home island of the cane. As a trained ballerina, she has the "best touching-toes posture in the business" (Niki Flynn's words). When she is not busy donning a prisoner's uniform and getting delightfully thrashed, Leia studies for a PhD in Chemistry and reads the autobiography of T.E. Lawrence. In other words, a wonderful subject to kickstart my series of CP artist interviews.
Leia's most well-known work can be seen on the site Bars and Stripes, which she co-founded with Michael Stamp. She has also shot with Miss Marchmont, Firm Hand, Stictly English, Northern Spanking and other producers. Moreover, you should check out her personal website and her blog Leia-Ann Woods Diary [edit: has since been replaced by Leia's New Musings]. And, if you are so inclined, her recent scenes with The English Mansion, where she shows a lot of promise switching to the dominant side.

There are other interviews with Leia on Spreview and at The Spanking Spot. I tried not to repeat any of the previous questions, so they make good additional reading. As does her Kinky Island Discs entry on Prefectdt's blog. 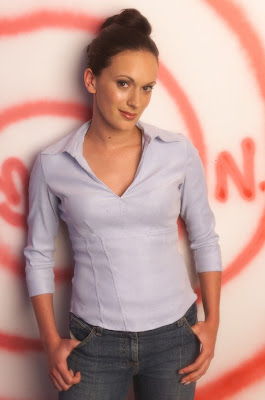 Leia: (laughing out loud) Yes, there are other interests. I like films that draw from life, such as Fried Green Tomatoes, The Remains of the Day, The Shipping News and Notes on a Scandal. Well, actually, anything with Judi Dench in it – I admire her so much as an actress.
You've mentioned how you enjoy learning the instruments, and of course being a writer. Exploration seems to be a big theme for you. So, where do you see yourself going from here? Any particular, tantalizing scenarios or fantasies that you didn't get to do yet?
Leia: There is one fantasy that I must play out soon. An Interrogation. I have discussed this with my friend Mistress Switch, where myself and other ladies are captured and interrogated by a foreign entity. They are questioning me in a language I don’t understand. They are pushing harder and harder for answers as they do not believe that I do not speak their language. They try all sorts of punishments and tortures to get me to speak... But to no avail...
Let's hope that you get to play that out soon - for all of us to see, of course. And thank you very much for the interview, Leia!
Posted by Ludwig at 1:40 PM

I used to have "The Way of a Man with a Maid", but I've sadly lost it. I *loved* that one. But I do have "Military PT". It's one of my all-time favourite CP films.

Virtuosity and turning... Torque and angular momentum... I can't help picturing you in a lab coat and glasses trying to explain all this to your geeky female research assistant - the hard way. **waves hand madly to volunteer for the job**

Thanks for a fantastic interview, Leia!

That was a "kick ass" interview. It was refreshing to see the questions getting away from thew standard formula, a thing I've only seen Padme Amedala (journey to the dark side) do before in a blog interview.

The last question - That scenario would be well worth watching!

Talk about "in-depth"! Not many interviews like that around the web. Great work, Ludwig, and thanks for being so forthcoming, Leia!

Hi folks....so glad you liked it....and thank you Ludwig for honouring me with an interview with you....I really enjoyed the different style of questioning.

Your interview questions certainly go beyond the standard cliche questions, such as the ones I typically ask! very impressive article :-)

A very inciteful and intelligent interview. Thanks Leia

Leia Great interview. I just love the prison scenarios. Let's see if we can get the Interrogation scene inacted for real after the Summer

Daily Mail done sold you out