The Mark of Cain

Cain said to the Lord, "My punishment is greater than I can bear. Behold, thou hast driven me this day away from the ground; and from thy face I shall be hidden; and I shall be a fugitive and a wanderer on the earth, and whoever finds me will slay me." Then the Lord said to him, "Not so! If any one slays Cain, vengeance shall be taken on him sevenfold." And the Lord put a mark on Cain, lest any who came upon him should kill him.
Book of Genesis, Chapter 4, Verses 13-15 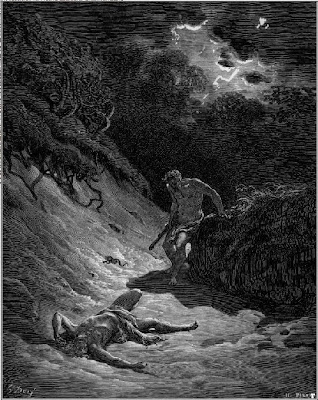 What an interesting article! - Aren't we all proud of our marks? After a caning I definitely spend too much time at the mirror watching them... ;)
Welcome in the blogging scene btw!

A very interesting take on the Great Spanko Question, Ludwig. I enjoyed this post very much.

I find this topic to be endlessly interesting. Although I would be very interested in seeing real scientific data about who we are and what we do, I don't think science is particularly well suited to examine why we are the way we are. My guess is that, physically, we have stronger endorphin responses than average and that the bottom is a stronger erogenous zone for us. There also seems to be a fascination with power, with playing games in which we give it away or accept it from another. Is that completely psychological, or does it develop around spanking as a child-rearing practice, whether or not we were subject to it? It will be interesting to see if spanking as kink disappears as physical punishment becomes less common for children. I suspect not, but the forms of expression will probably change.

The physical basis I described above really only works for bottoms. How would the tops out there answer that question?

As for me, I was never spanked at home and I had a very happy, liberal childhood. I did hear about other kids being spanked and even saw it first-hand once. However, my main inspiration came from history books, historical novels and films. I would read about whippings in ancient Sparta, torture in the Middle Ages and canings in 19th century schools. That was the stuff that turned me on the most, and I developed my most intense fantasies around it.

The historical material will always be around, in textbooks and in fiction, and I think a lot of kinky people will discover their "Mark of Cain" from that.

Very interesting observations. Of course, I think immediately of the 'Mark of Cane' but hten, I've been visiting the Spanking Writers (Abel and Haron) regularly.

I believe my kink was nurtured more by horror movies than by any actual CP (which I did get as a child and do NOT eroticize as an adult). The dread, the "safe" terror, the feeling of survival... I'm just a Final Girl at heart.

I have this silly fantasy of being on all the couches of famous psychiatrists/psychologists. Just to see what their various conclusions wold be. I can guess what predictable Freud would say, but what would Jung make of me? I just find the idea really hot - being dissected by someone who gets inside my head. Non-consensual psychoanalysis!

Whoa, tangent... too much Riesling...

"I also believe that the obsessive (and I don't mean that negatively) serach for 'What Made Us The Way We Are' is an independent fetish."

I believe so, too. Some kinky people are deeply interested in the question, others aren't, and it's ultimately a matter of personality type. Personally, I'm interested but not obsessed.

It can become an unhealthy fixation for some. I've met people who were on a real obsessive scientific quest. They read psychology papers, neurology papers, social studies and soak up every new theory. To the point where they lose all sense of fun of being kinky.

That's why I wrote that, while I find a lot of the scientific stuff quite fascinating in its own right, we shouldn't look for the One Definite Answer. There is none, and it's not necessary, even.

I suppose that, as a philosopher, I'm used to dealing with questions that have no definite answer. But they're not useless because of that. Often, you can learn a whole lot of other things by thinking about them. You can discard some possible answers that are definitely wrong. Or you can learn to render the original question more precisely. All of this is a form of progress in its own right and worth doing.

So I enjoy raising questions, and I'm not bothered by not getting a definite answer.

The quest for answers may be futile. Why do some people like lickerish or anchovies or the Grateful Dead while others detest them. There is not much middle ground there.

Ludwig says he was never spanked as a child yet apparently has a strong kink for it. I was beaten long hard and frequently yet still can't seem to get enough.

This is why I always like reading Ludwigs long winded dissertations on this subject. Just when you think he has husked the corn right down to the cob, he cuts the string and your balloon goes spinning off into the sky.

Three questions
A. Have you and Nikki done it?
B. Are you a genuine Goldberg freak - or did you just think it was cool incidental music for those DwithW clips?
C. What about Bela Bartok?

B. Sure I like Bach, and I'm also a big fan of the pianist Glenn Gould, whose famous 1955 recording of The Goldberg Variations you can hear in the clips. Moreover, the choice of music was an homage to "The Silence of the Lambs", obviously.

C. I like Bartok, especially the Concerto for Orchestra.