Alright, after the lengthy introductions, it is high time for a bit of fun. Needless to say, I am a fan of fun. Do you know what kind I like best? Apart from decorating a shapely female bottom with marks and welts, that is. What I really like is educational humour - you know, the kind where you acquire some interesting tidbit of knowledge in the process. After all, this blog is intended as a resource of learning and character development. Particularly for those readers with shapely female bottoms (the guys will benefit from it, too, though - I don't want to discriminate against anyone).
Speaking of bottoms, it was Pandora Blake who inspired me to do the following piece. In one of her recent blog entries, she had written about the importance of elucidating those who are not in the BDSM lifestyle on what we do and what our kink is all about:
"I do feel that because my sexual preferences are easily associated with misogynistic acts, I have a responsibility to make the distinction as clear as possible... I'd love to see more models - male and female - adding their voices and telling the world why they do what they do, and what they get out of it."
This is a noble undertaking. However, it can also be a very difficult one - not just because the fetish itself is strange and alien to outsiders, but also because of some very basic terminological barriers. Did you notice that BDSM people and vanilla people actually speak two totally seperate languages? It's true, and it happens whenever cultural groups with vastly different backgrounds and experiences try to communicate with each other.
Your background shapes the associations and expectations you have whenever you hear a specific term. For instance, when a mathematician hears the word "triangle", he will usually assume it to mean a basic shape of geometry ("polygon with three sides"), while an orchestra musician will probably think of the percussion instrument first. One word, several meanings. Ambiguities such as these could pose a severe hindrance whenever we spankos try to engage in discourse with the rest of the world.
To solve this crippling problem, I have started work on a "Non-BDSM Guide to BDSM Terms" - a sort of translation manual. It will examine a list of words and give the first association that the average vanilla person and the average kinky person is likely to have. As you can see, these associations are usually very different. 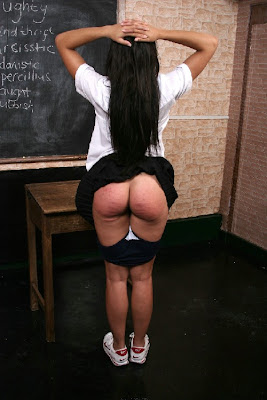 Top
V: The highest point of a building or mountain
K: A dominant person

Switch
V: A mechanical device to connect and disconnect a circuit
K: Someone who likes being both dominant and submissive

Slave
V: The Thirteenth Amendment. Or was it the Fourteenth?
K: see "pet"

Munch
V: To chew with vigorous working of the jaws
K: see "vanilla"

Cane
V: A short staff to assist one in walking
K: see "paddle" (but even more fun)

Collar
V: Your dog wears one
K: Your slave wears one

Ageplay
V: A form of regressive psychotherapy or some such shrink nonsense
K: Oh, daddy, no! Pleeease! Don't put me over your kneee...!

Gunplay
V: What Charlton Heston and the nutters at the NRA do
K: The practice of including actual (or simulated) firearms into a scene

Subspace
V: A scientific term coined by Stephen Hawking
K: A "natural high" that a submissive gets during a scene

Subdrop
V: A metereological anomaly characterized by rapid cooling and violent snowstorms
K: A physical condition experienced by some submissives after an intense session

Pandora
V: A woman from Greek legend. She had a box.
K: A well-known spanking model and blogger.

I hope you will find this little guide useful. I came up with all of the entries myself, which is why most of them suck so much. Feel free to add your own if you like.

One thats usedc by myself in both worlds -

Whip
Kinky - A single or multi tailed flexible implement often made of leather, used for whipping a bottom/sub.

Vanilla (or hortic) - a small single stemed branchless tree in it's first year of growth.

LOL, whenever I see the word 'triangle' I think of the restraint device used for flogging, particularly during convict era Australia or in British prisons.