It's Super Tuesday in the US presidential election year, and you know what that means: no other date could be more appropriate for me to pay my respects to the Greatest American Woman who ever lived. So I wanted to use the opportunity, and indeed I feel very proud and privileged to call her a partner in thoughtcrime and a much loved, cherished friend: Niki Flynn. 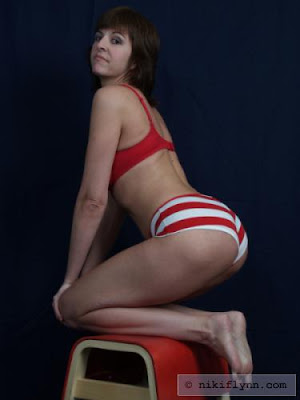 I first heard about Niki in 2004, pretty much at the beginning of her modelling career, when she had just done her debut movie The Exchange Student with Lupus Pictures. Actually, before I saw that one, I noticed the West Meets East column on their website. My first thought was: "Wow, this is cool! A British girl working with Lupus! And she writes well, too." At the time, I was under the impression that Niki is English, in a classic confusion of character and actress. So that was my original introduction to Miss Flynn: a dark-haired, pretty, petite girl-next-door type with a big grin and a sleeveless manga t-shirt, who sounded like she had some very interesting things to say.

I've loved her work ever since. Of course, I never dreamed that I'd ever meet her or that we'd become friends. That was just an impossible concept, out of this world. Niki was a star, an unapproachable icon, while I was just another guy with a passion for erotic corporal punishment. She probably received a dozen mails from guys like that per day and put them straight into the trashcan. No reason to even blame her for that - I imagined that as a spanking model, for each message from a genuine affectionate fan, you get ten from heavy-breathing sex maniacs. Why would you even look at your mailbox anymore when you're famous, you're making movies all over the world and having all this kinky fun?

On the other hand, Niki din't seem all that remote - she posted on the British Spanking Forums and I always enjoyed her "Dances With Werewolves" wit and sense of humour. So one day two years ago, I just decided to send her a message saying that I like her work and wish her all the best. It was important for me to do that, just to say thanks, and I wasn't sure if she would find the time to respond - she was probably at Heathrow Airport right now after an evening as the main attraction at "Night of the Cane" and boarding a plane to Prague.

Imagine my joy when I did receive a reply, and a very nice one at that. Not only was it the end of my erroneous belief that Niki is British, but we've been penpals ever since. The next welcome shock came a few months later when she wrote: "I have a photoshoot in Germany, would you like to get together and hang out a bit?" Needless to say, I was enthusiastic to chat about anything she deemed worthwhile (no matter if it's BDSM stuff or Mickey Mouse comics) as long as it meant an opportunity to meet the Great Flynn. So I took a day off from studying and got on the train to Cologne. I didn't dare to expect anything more than talking a bit and having a good time, and that alone would have made me more than happy. But I do admit that I took along one of my favourite canes "just in case".

So we got together and had a great, albeit somewhat rainy day in Cologne. Niki was likeable and funny and full of wit, just as I expected her to be from her movies and mails. I set out to meet a star and found a good friend. We explored the tourist sights a bit, with me trying my best as a guide, and we chatted about all sorts of things - ourselves, mainstream movies, horror stories, music, politics, and believe it or not, erotic corporal punishment, too. I love people who can carry on an interesting conversation about pretty much everything, and Niki is just that.

As the evening approached, she brought up the swell idea of being spanked by me. The only thing she insisted on was: "If you're going to abuse me, it has to be in German." You see, Niki has this "A Fish Called Wanda" arousal thing with foreign languages. Needless to say, I felt supremely qualified. So the cane got to see some action, and I am pleased to report that Miss Flynn's pronunciation of all the German numbers from 1 to 30 is top-notch. I wonder where she picked that up - do Rammstein have a song about counting?

After that, it was my turn to do some basic mathematical additions, and wouldn't you know it - it's a side of Niki that you don't see too often in her mostly submissive work, but her dishing out technique is just as good, and she has a genuine, playfully sadistic streak to go along with it as well. Which reinforces my long held conviction that those who switch (and really know the instruments first-hand) are among the best tops. In fact, my only gripe is that I actually got it quite a bit harder than she had. Next time, I'll go first, and afterwards the little bitch will receive a full measure of revenge.

But I really can't complain at all. I mean, we are talking about Niki Flynn here. And she was the second woman I ever caned (plus the fifth one who caned me, if you must know). The second! That's like being a fumbling young actor, and all of a sudden, you find yourself doing a scene with Marlene Dietrich. No wonder that I found the experience intoxicating.

After dinner, two bottles of wine and more pleasant conversation, I went back to Munich the next morning. I was already toying with the idea of doing a website or blog of my own one day. Not just to brag about my famous exploits, mind you, but also (and more so) to give something back to my friends and to our community. What I found in Cologne is that, whether we play in private or for all the BDSM subculture to see, we are all real people who share the same passion. And that is a good thing to know and tell the world about.

So here is to a wonderful little fish called Niki, who is not only a great friend to have, but also an embodiment of the real American values - freedom, exploratory spirit, likeable personality and not letting anyone tell you how to run your life. Take that, Hillary Clinton!

Labels: About Ludwig, Partners in Crime

As a matter of fact, Rammstein do have a song about counting. (It's "Sonne", my favourite. The video features the seven dwarves spanked by Snow White.) :)

This is a great post, Ludwig! I don't know if I'll ever be able to look at Super Tuesday the same way again.

Adele, I hope you'll run that clip on your site as soon as you can!

Kiss and tell! Yes, I do love being abused in other languages. Till Lindemann knows he can growl in my ear anytime (well, he does if he read my fan letter anyway).

However, my recollection is that it was YOU who brought up the idea of playing. And by the time you'd set up the camera and showed me all your canes, I was starting to get the hint.

Love,
A fish called me

Here is that Rammstein video

"However, my recollection is that it was YOU who brought up the idea of playing. And by the time you'd set up the camera and showed me all your canes, I was starting to get the hint."

Truly, our recollections are unreliable little things. Mine included - I honestly didn't remember who brought it up first when I wrote the post.

However, I have now consulted... My diary! So here, my esteemed readers, is the full and unabridged version that I wrote down a few days later:

Scene 1, morning, on the way from Niki's hotel to the Cologne cathedral. Niki: "There is a sex shop around the corner here, I bought a collar there yesterday." Me: "Yeah, I brought a few canes in case you misbehave." Niki: "I have a cane, too." Conversation goes on to other topics.

Scene 2, at the Cologne cathedral. Niki: "But, if you're going to abuse me, it has to be in German." Me: "No problem. Will you understand what I'm saying?" Niki: "The important parts, yeah." Conversation moves on to how great the cathedral looks.

Scene 3, late afternoon, after visiting various tourist sights. Niki: "Well... Your room or mine?" Me: "Yours is larger. I'll just bring my flamethrowers and chainsaws." Niki: "But no worms, please."

Scene 4, Niki's hotel room. I arrive without flamethrowers or chainsaws, but with a cane. I notice that Niki has changed into a mini-skirt in the meantime.

Collectively developed idea I'd say. And those are the best, anyway, right?

Guilty as charged - I'm a painfully arrogant, smart-alec son of a bitch. It's a desperate compensation for the myriad of insecurities and inferiority complexes that I have. Especially in the presence of goddesses like you.

Anyway, you know I love you!

Sometimes the comment boxes are as interesting as the posts.

Speaking of stalkers: since starting this blog, I have received some very nice emails from fellow spankos. I also got one or two messages that seemed... hm, how to put it... just very, very disturbed.

And I'm a guy! Can't imagine what a female model must be getting. But I suppose I can sympathise a bit more now.

I would never have expected that I'd get even a single dirty mail - and certainly not so quickly. I've decided to be proud of that. Makes me feel wanted.

Save those bad boys for when you're not feeling inspired to blog. They make interesting reading for us too.

And yeah, feel special. You've seen some of the ones I get!