There be some sports are painful, and their labour
Delight in them sets off: some kinds of baseness
Are nobly undergone, and most poor matters
Point to rich ends. This my mean task
Would be as heavy to me as odious, but
The mistress which I serve quickens what’s dead,
And makes my labours pleasures.
- WILLIAM SHAKESPEARE, The Tempest
This delicious passage from the Bard is probably the most concise (and certainly the most poetic) characterization of the kinky mindset that I've ever seen. I don't want to claim that venerable William was into whips and chains himself (or was he?), but it is the hallmark of great art that you can read all kinds of juicy interpretations into it. For me, this one certainly fits. And there are many other reasons for why "The Tempest" is one of my favourite Shakespeare plays. It is exotic, fantastical, richly layered, funny and arguably his most enigmatic work.
You probably know the plot. Prospero, the rightful Duke of Milan, is deposed by his jealous brother and left on an island with his daughter Miranda. The good news for Prospero is, he brought his books! Posessed of magic powers due to his great library and learning, he commands the spirit Ariel and other creatures of the island, like the native beast-man Caliban. They serve him reluctantly and in fear of the sorcerer's powers. When his brother, the usurper Antonio, sails close to the island on a voyage, Prospero raises a storm and makes the ship run aground. As Antonio and the other survivors find themselves stranded, the magician sets his next grand plan in motion... 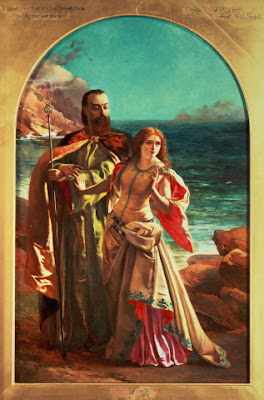 Sorcery is the pivotal theme, really. Because of his magical powers, Prospero controls pretty much everything from start to finish - he commands his slaves, creates the tempest, foils his enemies' plans and manipulates all the happenings on the island. Some interpretations see Prospero as a version of Shakespeare himself, the omnipotent playwright who is master of everything and everyone in his world. It has recently fallen somewhat out of favour, but I think it's an interesting angle.
At any rate, Prospero is a real kinky guy. That much is obvious. Here is how he threatens his unruly servant Caliban:
PROSPERO: If thou neglect’st, or dost unwillingly
What I command, I’ll rack thee with old cramps,
Fill all thy bones with aches, make thee roar,
That beasts shall tremble at thy din.

Hell, that's what I call majestic intimidation! Have you ever been dominated by someone this classy? I didn't think so. I used to believe that "Over my knee, young lady!" sounded pretty stern, but this stuff is way cool. And I have to admit, out of my league. No wonder that Caliban is as meek a submissive as you'll ever meet:

CALIBAN: How does thy honour? Let me lick thy shoe.
However, my favourite quote has to be from Prospero again. I'm still searching for the appropriate CP movie setting where I can use the following line:
PROSPERO: Thou most lying slave,
Whom stripes may move, not kindness!

Speaking of movies, there are several intriguing adaptations of "The Tempest". The great Derek Jarman made a free-spirited homoerotic version. Then there's the sci-fi classic Forbidden Planet, also loosely based on the play. Probably the most eccentric, flawed but compelling take: Prospero's Books by Peter Greenaway. It's a difficult, visually complex film starring John Gielgud and many, many naked people. If you can stomach two hours of unrestrained art cinema weirdness, you will find moments of genius here. Greenaway focuses on the "playwright as magician" theme, and the control freak in me is loving it.
I was reminded of all this when Prefectdt asked me if I wanted to do a segment for his Kinky Island Discs series. Like most brilliant ideas, it is fairly simple: kinky bloggers and celebrities get to choose what DVD's and other items would keep them entertained if they had to spend the rest of their lives on a desert island. Naturally, I love the series and jumped at the chance to be a part of it. You can read my contribution here.
I wonder if there are any spankable natives on the island. My Girl Friday? But while Robinson Crusoe is a great novel, I'm more of a Prospero at heart. Mad King Ludwig, master of everything he surveys! Holding the creatures of the isle and even nature itself at his beck and call with his knowledge and wondrous powers! That's my kind of megalomania.
So I've re-imagined "The Tempest" as a corporal punishment play. In my version, the servant spirit Ariel is named Adele, and Caliban becomes Leia-Ann. Another difference is that I don't force them to obey with "old cramps" - a few proper lashes of the whip will suffice. When a ship crewed by a squad of famous spanking models sails close to my island on a luxury cruise, I conjure up the storm and things really get interesting...
You may leave your applications to star in the play in the comments section. I haven't decided on a title yet - it will either be "Prospero's Whips" or "Tempestuous Canings".
Posted by Ludwig at 10:03 AM

Enjoyed your essay. Truly, the world is rife with S&M themes, once you know what it is you're looking for.

I have never seen The Tempest, I want to after reading this post. The origional version of Kinky Island Discs is BBC Radio 4's "Desert Island Discs" a show that is still going after over 60 years of broadcasting (info for anyone reading this who is not familiar with UK Radio). So the idea was brilliant but not my brilliace, just a damn good bit of idea theft (naughty me)hehehehe.

"So the idea was brilliant but not my brilliace, just a damn good bit of idea theft."

Oh, that's alright. I steal here, there and everywhere, nothing wrong with that. What marks out a good author is not so much pure originality, it is good taste and choice of sources. And you need to make them your own with your own style.

If you want to see "The Tempest" for the first time, I can't really recommend any of the movies I've mentioned - they're good, but pretty radical re-interpretations, so you won't see much of the original play.

There is a 1980 version by the BBC. I haven't seen it, but I hear it is very good and close to the source material. So that might be the right place to start. Or just go to the theater!