Before I came up with the blog, my original idea had been to just do a movie review site. So it's about time to write one. I thought about which title should get the honor of the first critique, and it didn't take me very long to settle on Wild Party. Released in 2000 by Lupus Pictures when they were still called Rigid East, it was not the first spanking film I ever saw, but the first one that totally blew me away. With its grim severity, "Wild Party" is definitely not for everyone, but I enjoy this level of intensity and consider it one of the all-time greats.
The format of the review took longer to decide. I had written some conventional ones at Spreview.net under another nickname, but while there are some good bits and a couple of really funny lines, they are convoluted and exhibit some of my worst traits - I can't bring myself to even read that stuff nowadays, and I wanted to do something different.
I've always been a fan of The Ruthless Guide to 80s Action. They cover all the mindless, jingoistic Schwarzenegger, Stallone and Van Damme movies from the classic era of shoot-em-up flicks, examining them with categories like "Homoeroticism", "Corpse Count" and "Stupid Political Content". The results are not only hilarious to read, they're surprisingly informative and perceptive in their own right. It's a form of affectionate lampooning - for all the nitpicking and tongue-in-cheek style, there is never any doubt that these guys love their movies in a "guilty pleasure" sort of way.
It struck me that this would be a perfect format for my purposes. So I just stole the idea. I have permission, and besides, I've always been of the opinion that a successful rip-off is preferable to a mediocre invention. What better way to poke a little fun not only at my beloved movies, but more importantly, at myself as the sadistic pig reviewer. So I hope you're going to like it. 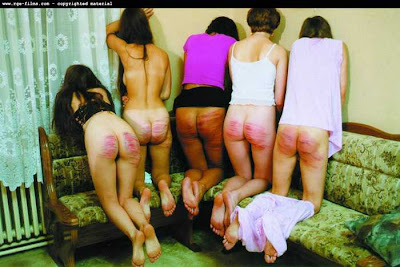 Victim Appeal:
Five Czech ladies, some of whom had starred in other Rigid East titles, get their just desserts here. Their pleasant girl-next-door looks add nicely to the suspension of disbelief. Before the "father" of one of the girls unexpectedly returns home and begins the inevitable corporal punishment, we are treated to a minor strip-and-kiss fest. Unlike some men, I never got the appeal of lesbian scenes. But when they give cause for beatings of this magnitude, I'm all in favour. As their doom unfolds, the young ladies look positively terrified, and it probably didn't need a lot of acting. I like the defiant redhead in particular, who bears a resemblance to someone I know. The brunette "daughter" is lovely, too.

Gratuitous Sadism:
The term gets thrown around lightly, but it really fits here: this video is intense, even by Rigid East standards. Actually, it's downright vile in an appealing sort of way. The father swiftly sentences each girl to 25 strokes of the cane. One of them ends up getting twice that amount because she tries to cheat (going to the bathroom and applying protective lotion to her bottom). While the sheer numbers aren't excessive, the force is considerable and the thin cane instantly leaves some rather nasty marks.

More impressive than the severity itself is the casual manner in which it is applied: without any "testing" or warming up, the father character just fires off each stroke as if it was the most natural thing in the world. Which, come to think of it, is probably exactly what it is to him. In fact, my only (and very minor) complaint is that as a result, some of the punishments rush by a little too quickly. Then again, the father's businesslike "let's get it over with" demeanor adds to the authenticity of the scene.

All the girls are quickly reduced to tears, sobs and shrieks of agony. Their bottoms get marked with vivid red welts that are a joy to behold. My favourite segment is the fourth (starring the redhead), which I will describe in a minute. But the daughter's punishment, saved for last, also makes for an exciting scene. Because she instigated the "wild party", she is the only one to get some licks with a wooden paddle in addition to the caning. There seems to be a special chemistry between her and the actor playing the father, and the result is arguably the liveliest part of the film.

Best Reactions:
The prize for the most memorable segment goes to the redhead who takes the penultimate caning. Even before the first punishment begins, she is the cheekiest girl with the father. Her attitude changes to mounting disgust (clearly genuine and out-of-character) as the others take their turns before her. She sits on the couch in stony silence, throwing the occasional dirty look at their tormentor. When it's her time to be chastised, the young lady pulls down her pants in a sublime, angry gesture of defiance. She's determined not to let this man break her spirit.

But that is exactly what happens, and here lies the beauty of the scene. As hard as our redhead tries to remain stoic and dignified, she just can't hide her growing distress. She's flinching wildly by the fifth stroke, crying by the tenth, and soon after sinks to the floor in a tearful heap. As she gets back on her feet in another magnificent act of resistance, you can sense that the girl's anger is now directed at herself rather than the punisher. After a few more vicious strokes, it becomes obvious that she's simply reached the end of her tether. The father spares her from further anguish, and a suddenly very meek lady takes her place facing the wall, still sobbing loudly.

Best Line:
"Daddy, no!" I know, it's not a great line in itself, but the daughter's despaired delivery while she takes her punishment is truly remarkable. Her legs cave in a couple of times, too.

Nice Psychological Touch:
This has to do with the redhead again, and it takes place while the third girl is caned (her "predecessor"). It seems that the two of them are good friends. The other girl is obviously in major trouble - she's screaming her head off and in a lot of commotion. So the redhead, out of her own initiative, leans over to comfort her friend. She holds the girl's hand and frantically tries to calm her down. In between, she glances at the father with a prizeless "you brutal swine" expression. All of this takes place, of course, while the redhead is still awaiting her own turn - and it certainly contributes to her defiant resolve. Which she then fails to keep up.

For me, the significance here is that the redhead's selfless compassion for her friend later makes us feel the same way about her. Because she shows humanity and empathy, we then watch her own ordeal with an extra amount of both. This is another element of what makes the scene special to me: while my sadistic side revels in the cheely redhead's demise, another part wants to comfort her. The ability to elecit that kind of schizophrenic response is what makes a CP film truly special.

How good is it really?
"Wild Party" still stands as one of the classics. It's obviously not for everyone's taste, and more than any other Rigid East video, it gave rise to the rumour of "starving Czech girls" who are exploited by unscrupulous pornographers. As we know from countless first-hand testimonies, this is a blatant falsehood. Still, "Wild Party" can be disturbing to watch. If that is what you want (genuine no-holds-barred punishment), it is a must-see. Since its release, other videos (including many of Lupus' own) have surpassed it in terms of story, production values or even intensity. But "Wild Party" remains strong stuff, and it definitely raised the bar for future "severe type" movies.

What you learned:
When I saw "Wild Party" for the first time, I was appalled and delighted in equal measure. It was the kind of video I had fantasized about, but I never expected to actually see it. So I suppose that this is what I learned - such films do exist, and I really like them. Oh, and one more thing: the Czech word for "daddy" is "vati", same as in German.

I didn't find "tatinku" for "father", but I found "tatinek" in a Czech wordlist. Maybe "tatinku" is an affectionate form like "daddy"?

I suppose "vati" could just be a German-derived slang term that found its way into the Czech language - similar to how some Germans today use the English word "dad".

Well, "Tatinku" would be the vocative form. I don't know the nominative. A lot of Czechs certainly use German exclamations like "Mein Gott!" (I do too - it just expresses the sentiment better than the English equivalent does.)

BTW, on topic, I thought "Wild Party" was brutal and savage the first time I saw it, but that was before I met the "father". (HH likes the redhead too.) ;-)

"Wild Party" is a strange little video. It is not very severe by today's standards. At the time, I thought it was excessive, but I didn't really know anything back then. I've seen a lot more movies since (and I made some experiences of my own), so that put things in perspective. Actually, watching it again for the review, I was surprised at how tame it looks to me now.

On the other hand, it remains a very intense (as opposed to merely "severe") video. There is just something about the reaction of the girls, the athmosphere, the whole dynamic that is not easily surpassed. A fine example for the fact that intensity as about much more than just a hard beating. I have a post in the works about the distinction.

Jan Zlatousty (the "father") sounds like an interesting guy. I read an interview with him about the making of "Stalin 2". He seems to have a faible for MM as well and does quite a bit of work for the site discipline4boys. Too bad I'm not into that at all - I'd volunteer for a video with them just to be able to say that I have a personal "Wild Party" connection.