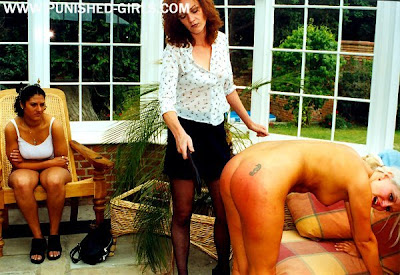 (Picture courtesy of Punished Girls, where you can download the movie)

Producer:
Calstar (released in 2000)
Entire Story In Fewer Words Than Are In This Sentence:
Reform school girls get in trouble
Victim Appeal:
Three British girls receive some jolly good spankings, and here is why: in the first segment of the story, two young lasses have escaped from their local reformatory and are hiking around the countryside. They grow hungry and decide to steal some apples. Lucky for us, they pick Lady Vernon's garden and are promptly caught in the act. The lady wastes little time before escorting the would-be-thieves to her house and punishing them with hand, paddle and cane. The second scene takes place at the reform school itself. When one of the pupils returns home too late, she is rewarded with an over-the-knee spanking and a caning from the boss.
None of the performers are identified by name, but I was able to track down the blonde from the first scene: Lisa Curtin. How I love to do a bit of cyber-detective snooping... Lisa is the main attraction for me, not only because she looks pretty and takes the hardest thrashing, but also because she seems rather intrigued by her ordeal. Time and again, she gets a half-grinning "This is different from my usual glamour shoots!" expression on her face. Out of character, but cute. By contrast, her companion is bored, indifferent and surrenders during the first stage of punishment - she might as well not be in the video at all. The final girl from the next segment is watchable again, a dark-haired lanky thing who has starred in other Calstar films.
Gratuitous Sadism:
This is a middle of the road movie - no outrageous severity, but enough to be appealing. To start things off, Lisa Curtin gets a 7 minute OTK hand spanking (first over the panties, then on the bare) that leaves her well reddened. After that, she is made to bend over Lady Vernon's sofa for an equally long encounter with the thin leather paddle. She remains in that position for the final caning. There are different angles and repetitions, so it's difficult to tell the number of strokes, but my estimate is around 12. They are all quite vicious and produce some handsome marks.
For some reason, the other girl goes straight to the cane, no other implements - and she gives up after two strokes! I beg your pardon? That doesn't even count as a "fizzle". Go back home, and don't you dare come near a CP film again. So, as a result, they had to slap on the other scene at the reform school to get a full video. I suppose it's good news, because the third girl is cuter, anyway. And far more resilient. We are treated to another hand spanking and a caning of some 15 strokes. Not as hard as Lady Vernon's, but enough to make the victim squirm and leave some welts.
Best Reactions:
Lisa Curtin all the way. With her teeth bared, she soldiers on through a corporal punishment session that, while not excessive in absolute terms, was probably a bit more uncomfortable than she expected. Tears start flowing as the leather paddle makes its mark, and predictably, things only get worse with the cane. But even as Lady Vernon fires off a dozen nasty strokes, Lisa never produces more than the faintest of sounds. She just gasps and snivels and grimaces most magnificently. Her relief at the end of it is genuine and palpable.
Best Line:
When the dark-haired lass comes home late, the headmaster is furious to find out that she has spent time with the boys in town. "I know what the local lads are like down there, when they can take advantage of you poor girls!" The beauty of it all lies in the fact that he has set the girl up in the best room of the reform school, with the largest bed - and he constantly reminds her of their "special relationship" and how grateful she is supposed to be!
Pot and kettle? Well, where would CP movies be without a nice old-fashioned set of double standards...
Nice Psychological Touch:
I can't really think of anything specific, unless you count the presence of Lady Vernon herself. She is not a great actress, but exudes an aura of intensity and dread that is quite captivating. Her segment of the video is clearly superior to the ending.
How Good Is It Really?
It's always hit and miss with Calstar videos. Some are excellent, some are forgettable, and most fall somewhere between the two extremes. "Lady Vernon's Caning Heaven" is one of their better titles. Alright, there are no sets or costumes worth the name (the reformatory looks conspicuously like someone's bedroom). The acting is average at best and the story is little more than an alibi. But the film has a certain rugged charm. Like Lady Vernon herself, a stately domme with wild red-brown curls and a cigarette-stained snarl of a voice. She has "cruel bitch" written all over her and clearly enjoys her work. Good technique, too. Together with Lisa, the brave tearful blonde, it's quite a lovely combination. I would have liked to see the two of them in a movie with better technical craftsmanship.
What You Learned:
Whether it's the Garden of Eden or Lady Vernon's front yard, apples are dangerous. Especially to young women.
Posted by Ludwig at 10:57 AM

Great review here Ludwig. Although I really have nothing to say, I can't stand the idea of your work going unrewarded without at least one comment. Please continue blogging and I will return to lurking in the shadows like a junkie.

Thank you, Tigerbutt, that is very considerate of you. But it's okay - I realize that not too many people will comment on the average movie review, simply because there isn't all that much to say. Maybe if they disagree strongly with my verdict on a film they know!

I have settled into the rhythm of doing a movie review in every third post, and there will be lots of other things in between, some of which should generate a bit more discussion.

This is true, it is difficult to comment on a review unless you have seen the movie yourself and if you have, you are likely to have already made up your own mind about the movie and am unlikely to be reading the review. Catch 22.