Thank You, Tim, For a Spanking Good Time! 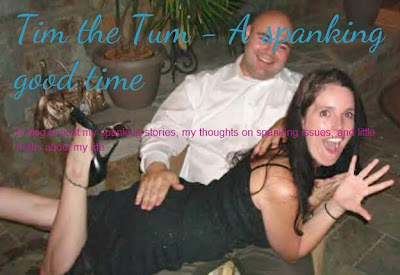 (Tim's blog logo, taken from Secret Spanko's tribute post
which was published after Tim had announced that
he had to stop blogging because of his bad health condition.)

(Update 2012/08/29: It just turned out that the message about Tim's passing was nothing but a horrible hoax! Someone hacked Tim's blogging account and posted a message which Tim had written during his stay in hospital when he wasn't sure how much time he would have left. Tim is fine and the treatment at the hospital obviously also bought him more time, even though his cancer can't be cured. I am leaving this post as it is, because Ludwig and I don't change old posts even if the circumstances have changed. And everything which I have written about Tim and his blog remains true, anyway. I am extremely glad to have Tim back and to know that he is alive and (given his health condition) well!)

As Kaelah mentioned, I haven't been doing much reading of other blogs this year, so I barely had time to look at Tim's blog while he was writing it. I knew that Kaelah liked it a lot, though, and she always kept me fairly up to date - also about the sad news of Tim's cancer. Having read a few posts on Tim's blog now, I realise what I have missed. He was a character, had a wonderful wit and a good writing style - not to mention a selection of subjects that fall exactly within my area of interest, what with all those website reviews, interviews and so on.

I truly was deeply moved by Tim's final, posthumously published post. I can only hope that one day, I will face my own end with half as much courage, contentment and good humour as Tim showed there in his writing.

It is so very sad when someone dies so prematurely. Like Kaelah, I would like to send my heartfelt condolences to Tim's wife, his children and his friends. They are the ones who were closest to Tim in life and will miss him the most. But he is already missed here in the online spanking community as well.

I read Tim's touching last post this morning.
I always admired his sense of humour and his fortitude when he knew that he was facing death. When he was diagnosed with cancer, he wrote about it on his blog but deleted the post several days later as, if I remember correctly, he wanted to keep his blog fun and lighthearted without bothering his readers too much with his health condition.
Also it seemed to be obvious that his chances were not good, I was shocked to read how quickly his condition deteriorated and I sincerely regret that I didn't get in touch with him or commented on his blog as I was quite a regular reader since I discovered it.
I hope that his last months were as happy as possible and he was able to do all the things he wanted, kink-wise or not.
My thoughts are with his family.
Farewell Tim.

I found a picture, without text on it... Maybe it will better illustrate...

The Tim thing really affected me. We shared a lot in common, and maintained an email correspondence. I wrote a post about him following his initial farewell- little did I know that he's passed away the night before that was posted. His last posthumous humorous post via his wife really tugged on the heartstings and I got a little sniffle reading it. Funny/Sad how you can feel so connected with someone you've never met. Adios, mi amigo.

This is a beautiful, touching tribute. He is much missed.

This is something new for me, and from your description I think I would have greatly enjoyed his blog as well. What a great sense of humor.

And as Emen says, a lovely tribute.

Very sad to hear about his passing. This is a very nice tribute.

Sorry to hear the sad news about Tim, had a few interesting discussions with him via his blog.Lost my Mother to cancer some years ago, it happens so fast.
RIP Tim, thanks for the blog, lets hope there are some spanking angels up there.Thinking of you and your family.
Al

@ Fenris:
I didn't comment as much on Tim's blog as I would have liked to, either. But, as much as I can understand a blogger's desire to get many comments, I know that one doesn't always have the time to write comments, especially if a topic is more complicated (which usually also makes it more interesting, though). And I think Tim knew the problem. For example, he never commented on our blog, either. When I mentioned the clip with Leia-Ann on his blog, though, it turned out that he had watched it and liked it very much.

Cancer is indeed a horrible disease and often it does its destructive work much faster than one would have thought. From what he wrote, Tim obviously used every day as well as he could. And it was good to hear that he at least seemed to have passed away peacefully, even though I would have wished that he had much more time left.

@ Stan/E.:
Thanks a lot for pointing me to the picture! You used it in your tribute post, right? In this case I had chosen the picture including the text on purpose, though, because I wanted to show how the header of Tim's blog looks like and how he described his blog.

@ Secret Spanko:
Your tribute to Tim was very beautiful! I was also shocked how fast Tim passed away. I posted my comment on the post in which he announced that he would stop blogging on the day he died. He most probably didn't read it any more. It is indeed fascinating how close one can feel to someone one has never met. And I guess your relationship must have been even closer since you exchanged private e-mails. I only commented on Tim's blog and still I cried for him.

@ Emen:
Welcome and thanks a lot for commenting! Yes, Tim is definitely missed.

@ Ana:
Tim had a great sense of humour indeed! If you find the time, you can still take a look at his blog.

@ Lea:
It's always a sad thing when such a nice person passes away. But it is even more horrible when someone is as young as Tim was.

@ Al:
Thank you very much for stopping by and for your comment! Cancer is a horrible disease. I guess all we can do is to use the time that we have as well as we can. That's what Tim obviously did.

Oh my friend, your tribute has me in tears! Please leave it exactly as it is.

Nothing is worth the misery the ignorant bastard who posted my obit has caused my friends out there, but this post almost makes it worthwhile.

You have my abiding love, thanks and friendship.

Oh, I'm so glad it was all a cruel joke. I'm happy Tim is still with us.

@ Lazarus: Wow, what a strange and nasty prank! Some people really are utter morons. Hacking someone's blogging account and posting their pre-written farewell message while adding a fake message from that person's wife really goes beyond cruel humour. It is just offensive and plain wrong.

Let's not get too annoyed over it, though, because that is just what these trolls want. The overriding feeling for me is one of happiness, because it turns out that you are still around!

@ Tim the Tum:
It's a strange situation to have you commenting on your own tribute post! I am very glad that you like it, though. I never thought that I would get your official approval. I've just added a little disclaimer to let people know that the information about your demise was nothing but a horrible hoax. It's wonderful to know that you are alive and even gained more time!

Whatever sort of twisted mind could find satisfaction in this hoax. Quite incredibly cruel.

@ Peter8862:
It seems that Tim has finally found out who did it. Obviously it was someone he knows, as I had already suspected. He doesn't want to say more because he wants to protect the hacker. I can understand that, even though it might make it more difficult for some readers to believe the whole story. Tim wrote: "I can say that the action wasn't malicious or mean-spirited. It won't be repeated. It was what it was, and there were reasons for it. Not necessarily good ones, but still, ones that I can, on some level, understand. I can't tell you more than that. Well, I'm not prepared to, because of who it affects."