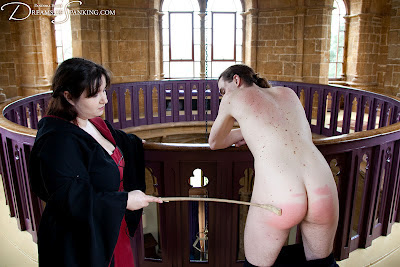 (Adele and Jimmy are both experienced tops as well as bottoms.
And avid writers about the question of respect and style.
Picture courtesy of Dreams Of Spanking.)

Poppy and Ana both recently wrote posts about rude wannabe tops / dom(me)s. You know, people who suddenly come over at a party or write an e-mail to a bottom or submissive whom they don't know at all and demand that said bottom / submissive has to submit to them. From the comments written on both posts, it seems that quite many submissives have made such an experience at least once.
As I wrote in my comment on Ana's blog, in my opinion, such wannabe tops / dom(me)s are simply insecure people who try to increase their self-confidence by belittling others. Because people who are really self-confident don’t behave like that. Pandora Blake once aptly described those tops / dom(me)s as being of the "Lord Sir Master Domly McDomlyson" type (because that is the kind of nickname they tend to give themselves in order to show just how important and dominant they are). I think that name is hilarious! And only slightly exaggerated. One could of course come up with a female variant as well.
I am lucky because I have never had to experience anyone like that so far. I guess the facts that I am in a relationship and that I identify as a switch and as not being submissive (even as a bottom) keep those people away. Although I wouldn’t be surprised if I had to deal with one of them at some point.
In my opinion, a real top / dom(me) is someone who has good empathy, pays attention to the bottom's / sub's needs and limits, listens to what they have to say and makes sure that hard limits are never crossed. That is what in my view makes him or her earn the respect and trust that a bottom or submissive needs in order to let go. And I think that good tops / dom(me)s are aware that respect indeed has to be earned and is not something that they can demand simply because they have decided to call themselves Lord Sir Master Domly McDomlyson or Lady Ma'am Mistress Toppy O'Toppyson.
I'm curious, though, how rare or common are rude wannabe tops / dom(me)s really? Have you ever come across one of them? If yes, how did you handle the situation? Finally, since the commenters who had made experiences with rude tops / dom(me)s were usually female, there is another question that is of special interest to me: How about the male bottoms / submissives out there? Have you ever had to deal with wannabe tops / dom(me)s as well?
Posted by Kaelah at 9:56 PM

I've seen just as many women behaving in a rude, arrogant and presumptuous way in their domme personal as I have men. It doesn't help that the femdom stereotype demands that the woman style herself as a latex-clad self-obsessed goddess, while her sub should be demeaned as a pathetic snivelling worm. Of course it's only fantasy, and if people want to play consensually that way in private they have every right to, but in the absence of more diverse models of female dominance and more positive models of male submission, it's not surprising that newcomers to kink reproduce the only models they've been shown.

The lady version should perhaps be more like Mistress Goddess Queen Domina of Castle Dominion...

I may have been very lucky in never having been approached in this way but being male it always seems to be up to me to make the first approach. Thinking about what OBB wrote, it could be just as annoying if the situation is reversed. I promise never to uninvitedly drop to my knees before a Top or Domme, that I do not know and have never talked to before and swear unending loyalty and service :)

I may have just been lucky but I haven't met any really rude dominants. When I first stared out on my journey as a submissive I had bad experiences but if I was dealing with an experienced dominant that was mainly due to my inability (or unwillingness) to properly explain what I wanted or expected. In my few experiences with newcomers to domination I think any rudeness has arisen through their inexperience and nervousness. I have never really enjoyed the verbal degradation and insults that is often associated with domination and it does appear that many Mistresses feel that this is expected of them. However since for the last 10 years plus I have only had the one mistress rudeness has not really been an issue.
Before I realised that I was at heart a submissive (a very long time ago) I experimented with spanking women but found that although in my fantasies I was the cruel, sardonic and demanding Master I could never play that part convincingly. As a result I found that I spent a lot time apologising to the lady whose bottom was bare over my lap and constantly asking if they were okay. I suspect that they may have found this irritating and possibly a bit rude and if so I can only offer them belated apologies through this comment.

In my personal experience, the good tops far outweigh the bad tops. But thanks to the internet, any of them can easily connect with others. I've seen many of the "online doms" who have probably never had a real kink (or any) relationship before and will butt into others conversations, ordering a sub/bottom around. Sometimes it seems to be a monkey see, monkey do kind of thing. These people observe how I interact with a top I'm close to and may "brat" with or whatever, and think they can jump in and react in kind. Um, no.

Look at the "story" in videos etc.

@ Our Bottoms Burn:
I agree with you in that it is a good advice for bottoms / submissives to be careful about whom they play with. The problem is, though, that some of the wannabe doms seem to insult subs at least verbally without having been invited at all. I guess this is something no sub who is active on kinky forums can completely prevent from happening.

@ Pandora:
I absolutely agree with you about the lack of diverse role-models for female dommes. Still, I find it shocking that some people (men and women) don't seem to understand that kinky play is about fantasy and that they have to ask for permission and talk about limits first before they engage in any kinky play with someone whom they don't know.

@ Spankedhortic:
Seems like we are both lucky then, never having had to experience any rude tops / dom(me)s. Hmm, I guess I would be quite irritated if a stranger suddenly fell to my knees and swore unending loyalty and service. So maybe it is a good idea not to try it. ;-)

@ Simon:
Indeed there seem to be quite many male submissives who are into verbal humiliation. But I think a good domme is one who openly talks about preferences and limits with every sub and takes the time to find out whether they are really into this thing or not. It's great to hear that the chemistry between you and the mistress whom you are playing with now is so good!

@ Lea:
I agree with you, it is surely easier for wannabe tops / dom(me)s to command strangers around in online forums than at a real event. Unfortunately, there seem to be some of them at real events, too. Let's hope that we never come across one!

@ Bob S:
Welcome and thanks for commenting! I guess you are referring to videos that show verbal degradation and to the question of role-models which Pandora brought up as well. Still I think the problem is that some people obviously don't have any common sense and can't distinguish between fantasy and reality. Just because someone is into verbal degradation in a role-play scenario with a trusted partner, it does not follow that they want to be ordered around or treated disrespectfully by someone they don't know and haven't invited to play.