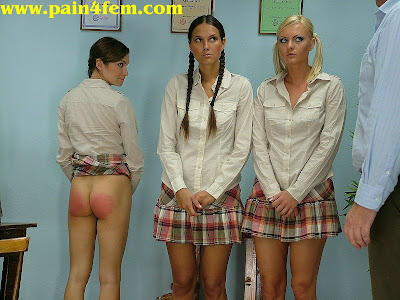 Producer:
Pain4Fem (released in 2007)
Entire Story In Fewer Words Than Are In This Sentence:
Schoolgirls throw paper balls, get punished
Victim Appeal:
The video stars Charlie (aka Zuzana P.), Sandra Sanchez and Angela, three Czech pornstars. Mind you, I don't watch many vanilla skin flicks, as most of them are just too formulaic and boring. But I do love the meticulous cyberdetective work of identifying girls. "See? She has a totally different look and hair colour, but the mole under the left breast gave her away!"
More often than not, hiring vanilla models to do kinky work yields rather underwhelming results. They tend to be pleasant as pure eye candy, but it's obvious that their heart isn't in it. Compared to some other examples I could name, though, the performances in "School Days" aren't all that bad. While the girls would certainly be useless in a werewolf-style production (both in terms of toughness and acting ability), they do a tolerable job as stereotypical naughty schoolgirls. There is some chemistry between the three of them, with a lot of cocky smirks and shrugging of the shoulders while confronting the authorities. They seem to be having fun acting out the prank scenes. Not too much fun during the spankings, but that's the point, isn't it?
Gratuitous Sadism:
The story follows the traditional ABAB composition: offense, punishment, offense, punishment... It opens with the girls alone in the classroom, causing a bit of mischief. I never got the appeal of throwing paper balls myself, but then again, I was one of those elitist nerds in high school (you can probably tell). Anyway, the teacher comes in and straps the pupils' hands a bit. Then they get caught using cheat slips during their exams, which earns them a trip to the headmaster's office and a hand spanking. The next scene is a back whipping with the martinet. I don't recall the offense for that one, maybe it wasn't given. Finally, after another paper ball battle (these brats never learn, do they?), the three young ladies get the cane.
The punishments are all pretty light. While the canings are fairly long (33 strokes for Charlie, 38 for Sandra, 32 for Angela), the strokes are tame. On the plus side, the sequences are all well-filmed, using a variety of angles. And the victims get some visible marks, simply because their bottoms aren't used to this kind of treatment.
Best Reactions:
The girls all react in a very similar way, so I'm hard-pressed to pick out one of them. Probably Sandra Sanchez. Her "Owww!" and "Aaaah!" moans are a tad better than those of the other two. Besides, she's blonde, and admittedly, I have a genetic predisposition towards that particular phenotype... (which reminds me, why haven't I reviewed anything with Amelia-Jane Rutherford yet?)
Best Line:
Hm. Well... Ah yes. "Please don't disturb me for the next 15 minutes." The headmaster, on the telephone while he gets ready to spank the girls.
Nice Psychological Touch:
They had a skeleton in the classroom. You know, for biology. One of the lasses is fooling around with it during the opening scene. I liked that. There is just something about a 20-year-old girl shaking the hand of a skeleton... Another kinky movie waiting to be made, about the finiteness of our earthly joy...
How Good Is It Really?
This is one of the lesser efforts by Pain4Fem, but made with their usual technical proficiency. If you like schoolgirl scenarios, eye candy and lighter spankings, it is definitely worth checking out.
What You Learned:
In addition to the cane, some schools use the whip.
Posted by Ludwig at 11:46 PM