Happy New Year! Kaelah and I hope that you had a "guten Rutsch", a "good slide" into 2014. We did, spending a quiet but enjoyable new year's eve with a friend of ours and going outside at midnight to set off some fireworks. Kaelah playfully chided me for being a "silly boy", but could not resist lighting the fuse of a rocket herself, which she had never done before in her life. See, I seduced her once again!

Last year, I made the New Year resolution to write more blog posts than in 2012, which had not been a very productive year for me with only six posts while Kaelah kept things going. I met that goal with a large margin, writing 21 posts in 2013 to Kaelah's 42. Maybe this year, we can achieve more even numbers still. But I am not going to make any specific New Year resolutions this time. How about you? Have you set yourself any specific goals for 2014?

As Kaelah wrote in her last post, things between us have not always been smooth sailing during the past year. Part of the challenge we are facing is undoubtedly the normal set of adjustments for a couple who have been together for several years and are settling into a truly long-term relationship, while another part of it is probably due to the fact that we are both such perfectionists and so introspectively minded, thus prone to self-doubts and over-complicating things. But while the past twelve months have at times been difficult, they have also taught us many things about ourselves and each other. Moreover, we had a great holiday together over the last two weeks, laughing a lot and really enjoying each other's company.

The other day, we filmed the LOL Day Clip for which you voted in November. I notice that it has been some time since we showed you any new pictures on this blog, so I thought that we would start the new year with a little sneak peek. Here is the result of the 19 cane strokes given by Kaelah to me: 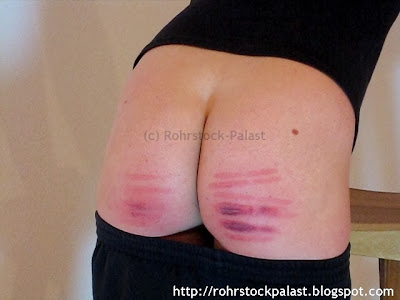 And the result of the 22 cane strokes when I returned the favour: 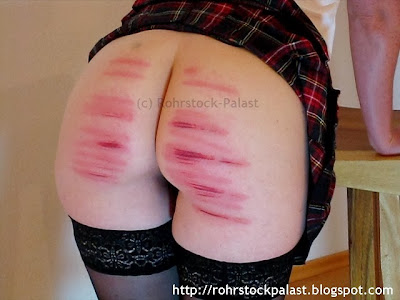 There are many enterprises to take care of at the start of 2014, so I am not making any promises. But if everything goes as planned, I should have time to edit the clip in the next couple of weeks and you should be able to see it fairly soon.

Let's hope that our sneak peek is a harbinger of many exciting kinky adventures to come in 2014, not just for Kaelah and me, but for you, our readers, as well.
Posted by Ludwig at 10:11 PM

Of course I enjoyed the cane marks that I witnessed on Kaelah's bare bottom. She must have loved the present you gave her, for celebrating the New Year 2014.

Nice stripes on both of you. I'm jealous, I want stripes like that :)
Great to hear that you both enjoyed the holiday period. Take care.

Happy you enjoyed the holidays.

good start into 2014 for both of you!
as i looked at the fotos of your behinds i had one thought...
ok maybe two as i lost (WOW, nice butts!)
prove me wrong but it looks like Kealah has a far better aim than you Ludwig or had you been still drunk from the new years celebrations??
And dont tell your target was smaller... :-)

@ Hannilein: No, the distribution of the stripes on Kaelah's bottom is intentional. I aimed to cover her whole bottom with the 22 strokes from the upper end to the lower, and that is what I did. The two strokes on the top went a *little* too high, and the strokes on the bottom a *little* too low, but no major misses. I was pretty happy considering that we had not done a caning in quite a while and I was out of practice.

Indeed, the 19 strokes Kaelah gave me were mostly on the lower half of my bottom. She could have gone higher. Actually, she missed a couple low, but don't tell her I mentioned it - she is still beating herself up over it.

Although I am a bit late, I still want to wish you both a very happy new year.
By the way, the idea that Kaelah missed some strokes never crossed my mind when I contemplated the result. But if you still feel bad about it, I guess you have one more good reason to practice more often in 2014.

Beautiful stripes, both of you! What a wonderful matched pair :)

The preview images look like the two of you had fun and your readers have something to look forward to!!!
Have a GREAT 2014 - Eric

I saw this little clip and I thought of the two of you :

They change position with speed - they probably practiced??!! - Eric

@ sixofthebest:
Glad you enjoyed the picture!

@ Spankedhortic:
Thank you very much, Prefecdt! I keep my fingers crossed that similar stripes are awaiting you in 2014 as well.

@ Hannilein:
A happy 2014 to you as well! I am actually quite happy with both results. As Ludwig said, he tried to spread out the strokes evenly and I think he did very well. I tried to strike only the lower part of his bottom because he had told me that he can slightly feel the strokes I his spine when I hit the upper part of his bottom. He has now told me that it is okay to spread out the strokes a bit more the next time. While he feels a slight vibration in his spine, it doesn't cause any pain and there is no risk of causing any damage. Ludwig's bottom is smaller than mine, anyway, and when I only aim for the lower part, it's almost impossible not to hit the same spot several times in a row. You can also see that in the picture. As Ludwig said, I also had two (two, Ludwig, not several ones ;-) ) strokes which went slightly too low (on the very top of his pants). They didn't do any harm because the pants were too thick, but you can hear me cursing about it in the video! ;-) Well, in return Ludwig hit the crease between my bottom and my thighs several times. Still on target, but ouchy! Given the fact that both Ludwig and I didn't have any caning practice for about half a year and only practised with a cushion before making the video, I think the results are very beautiful. Oh, by the way, no drunken canings here, we didn't have any alcoholic drinks on the New Year's celebration. ;-)

@ Fenris:
A Happy New Year to you as well! You are of course right, the low strokes provide a good excuse … ahem, reason … to practise more often in 2014! ;-)

@ Pandora:
Thank you! Wishing you and your loves ones a wonderful 2014.