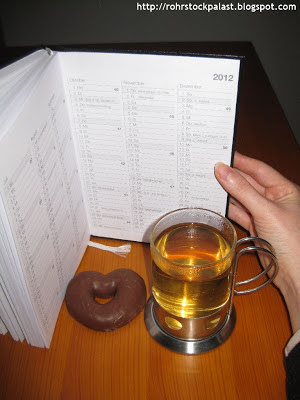 The last month of the year is about to start. Here in Germany, the days are getting shorter and shorter. It's cold outside. Time to wrap oneself into a blanket, have a cup of tea and recap the year. It is late and I am tired right now, very tired. So better don't expect me to write very coherently today. Looking back, though, the year has been a good one so far. A busy one, but a good one.

As for the kink, it seems that 2012 will become my most productive year blog-wise. There have been many posts, lots of pictures and a few clips (Ludwig and I even filmed some that we haven't started to publish, yet). And I have communicated a lot with like-minded people which was (mostly) wonderful!

Apart from the blog, there hasn't been much kinky activity this year, though. No parties, not much play between Ludwig and me and no kinky scenes or film-making with others. But we met two wonderful fellow kinksters on different occasions and had a fantastic time with them. There wasn't any play involved, though, just vanilla activities and lots of great talk.

I have to admit that I haven't missed the kinky fun all too much. Ludwig and I have been very close in other ways. He has helped and supported me a lot this year. Sharing thoughts, fears, hopes, time, work, fun and of course emotions is what a love relationship really is about, for me. And that's what we have.

This year I have taken more than I have given, though. I have been very occupied and Ludwig has constantly put my needs before his own. I hope that will change soon. It would be good to experience a time of less work, less planning, less mental occupation with the future and more light-hearted fun in the here and now. As I said, I haven't missed the kinky play all too much, but being in the right frame of mind for some spontaneous fun more often would be great nonetheless.

For December, Ludwig and I have planned to shoot our LOL Day clip. And I hope that we will have the time and energy for some private play as well. I already have some ideas on my mind. But right now, I am just tired and in need of a cuddle. And my timetable for the upcoming month is rather full again already. Well, we'll see.

In the meantime, I would love to hear about your kinky year. Has 2012 been a quiet or an active year for you so far kink-wise? Have you made any great experiences that you would like to share? And do you already have any plans for special kinky activities in December? Your memories and inspiring stories are very welcome!
Posted by Kaelah at 11:59 PM

I hope that 2013 is a wonderful year for you and that December is a great way to finish 2012. I love your choices for your blogroll additions. I also tried (unsuccessfully) quite a while ago to comment on your first Liebster award post but finally gave up. Blogger hates Wordpress users.

It sounds like life is perhaps finally slowing down a bit for you? Be sure to relax, take some time for yourself, and to enjoy yourself.

I am glad you had a good year.

I have been very active this year . I will be sharing a special story soon.

I'm happy to hear that you and Ludwig have been even closer, kinky play or not. 2012 has been a rough year for many, myself included. Blocking out the real world stuff and just thinking about kink though, it's been pretty good. I managed to attend 3 major parties. I've met lots of awesome new people. I ventured into my local scene and have made some good friends and that led to a wonderful top to play with at home.

@ Ana:
Thank you! Unfortunately it seems like December will remain a rather stressful time because several important tasks aren't finished, yet. But I will try to find some rest in between different tasks nonetheless.

I'm sorry to hear that posting your comment didn't work. I always write my comments in a text editor first, so that they aren't lost in case publishing a comment doesn't work. Maybe you can use the "Name/URL" option in case commenting with your Wordpress account doesn't work? I think the resulting comment header looks the same.

@ Lea:
I'm sorry to hear that 2012 has been a rough year for you. It's nice to know that you had at least some fun kink-wise. Having found a wonderful top to play with at home sounds very good indeed!

There was no kinky play for me this year. Nonetheless, it was, kink-wise, very important for me as I met fellow kinksters for the first time in person. This may sound like a minor achievement for some, but as I tend to be quite introverted and came to terms with my kink not that long ago, I consider it quite a big step.

@ Fenris:
For me, reading about kink, commenting on blogs and finally exchanging e-mails with Ludwig already was a very big step. So, I would definitely say that meeting fellow kinksters in person is a rather big achievement, especially for someone who is introverted. :-)