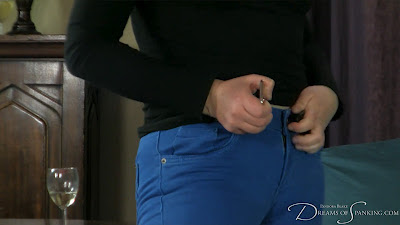 As you might know, I'm not so much into classical domestic spanking scenes. But the picture of a spanker determinedly removing his (or her) belt with a swish while a spankee is watching nervously, knowing that it will be used on his (or her) behind, soon, holds a huge appeal for me nonetheless. Using a belt that has just been worn as an implement adds a special flavour to a scene in my opinion.

It seems to be something that is usually only done by male tops, though. Pandora Blake recently published a clip in which Zoe Montana spanks Adele Haze with her belt. Pandora wrote about the fact that she hadn't seen a woman remove her belt in order to use it on someone's bottom before. You can read her post and watch a preview of the clip here. I couldn't remember having seen a woman using her belt like that before, either. And I wondered why it seems to be so uncommon.

One explanation that might at least partially answer the question is that women's belts might often not be as suitable as spanking implements as the usually bigger and sturdier belts worn by men. A possible solution for a female spanker is to deliberately look for a belt that doesn't only look nice but also fulfils the requirements to make a good spanking implement. The last time Ludwig and I were together, I had another nice idea, though, which I liked very much. I can't remember having seen it on video, either. 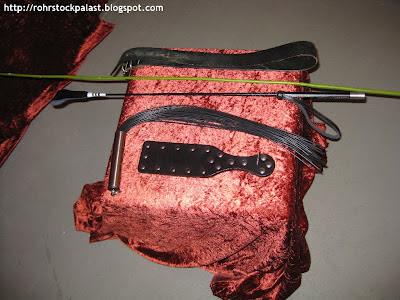 (You can see Ludwig's belt is on the top of this picture.
He used it on me in our clip Dachshunds In Space.)

All you need is a bottom who wears a belt that is suitable for administering a good hiding. Ludwig has such a belt which he has already used on me a few times. On that day I was in a more dominant mood, though. So, I pushed Ludwig onto the bed and started removing his clothes. Then I opened the buckle of his belt, removed it with a swish and doubled it in my hands. I pulled the two ends apart to elicit a cracking sound, looking Ludwig into the eyes, playfully and menacing.

I didn't use the belt that day, though, because it wasn't the right time for a tanning. But I enjoyed the dynamic very much and I would like to try it one day, in an erotic scene. For me, the thought holds a huge appeal, especially in an F/M scenario. The idea of using his own sturdy belt on a male spankee somehow gives me a special thrill. That said, I have used his belt on Ludwig before, in a training session. But I have never deliberately removed his belt to use it for a whipping, and that's what makes the idea so exciting. So I guess Ludwig will be in for it one day.

How about you? Do you enjoy the picture of a spanker removing his or her belt in order to use it as an implement? Have you only ever seen a male top removing his belt or have you come across any other constellations? Have you ever used a belt in your own play? And which kind of a special scene involving a belt would you like to see? I'm curious to hear about your experiences, opinions and ideas!
Posted by Kaelah at 7:11 PM

I have only seen and heard about men removing their belts. It's a turn on for sure with Bacall. It's a double thrill to take her into a closet, remove my belt and give her whatfor.

I have no fantasies about getting the belt myself.

I've been meaning to watch that scene for a while now, and Zoe is every but as hot whipping off that belt as I'd expected. Which is saying something! :-)

I've never before seen a woman whipping her belt off. But I've seen a couple scenes in which a mother demands that her son take off his belt and hand it over, both on mainstream U.S. TV shows. The first was What's Happening, probably in the late 70s or early 80s, and the whipping wasn't shown on camera. The second was a show that didn't last very long, but did show the action.

My fascination with being asked to remove one's own belt for punishment pre-dates those shows, however. No idea where it came from, but it's definitely very hot for me!

When I see P remove his belt and know it's going to be used on me is definitely a real turn on.

Thanks for the links will take a look.

I've had my belt removed for a spanking. My hands were on my head and there was unbroken eye contact as the buckle was undone and the belt pulled free, a real MMMMMM! moment. The belt did not come out smoothly and a little tugging and giggling went on but that only added to the moment.

@ Our Bottoms Burn:
So whippings with a belt are one thing that the two of you only practise in the "classical" M/F variant. Of course everyone has personal preferences, so it's not surprising that there are implements which Bacall likes but which hold no appeal for you, Bogey! Are there any implements that Bacall uses on you, but not the other way round?

@ Ronnie:
Thanks a lot for stopping by! I think there are many people who have a fascination for belts being removed for a spanking. So, I keep my fingers crossed that P will take off his belt for you again soon. ;-)

Do you think that the belt should be doubled up, or should it be folded a bit near the buckle to leave the proper length?

I think that doubling it makes for a loud crack, but I'm not sure it makes for the best punishment. I'm curious what others think is the proper way to use the belt.

@ Rich Person:
Ludwig and I only use the belt doubled up and I can definitely tell you that it makes an impression! That belt is quite heavy. I think I wouldn't use it at full length because it already covers most of the bottom when being doubled up (as you can see in the picture, it is almost as long as the flogger then) and I would be scared that it might wrap around if used at full length (wrapping around is a complete no-go for me). It might work with a slightly lighter belt and some proper target practise, though.