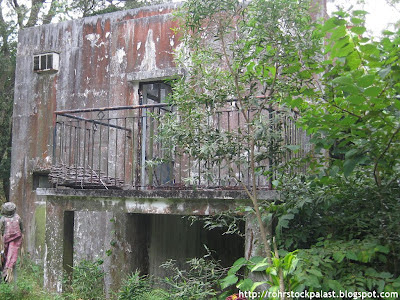 Outside the little village, there was an old derelict house. It had been abandoned many years ago and nature had already started to take back what once belonged to it. There was a rumour about this special house. It was said that the house was haunted. Several villagers who had passed by the ruin on a walk through the woods reported to have seen the figure of a young woman. She looked like a human being but couldn't be alive, since she never spoke nor moved, and her figure was told to be semi-transparent, as if she wasn't really there. 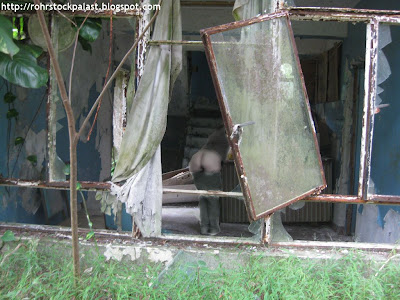 Some had spotted her through the broken glass of the window to the former living room of the house. Others insisted on having seen her outside, on the stairs to the old porch which was now overgrown with ivy. She was also reported to have appeared in the shelter beneath the porch that still was the home of some rotting garden chairs. 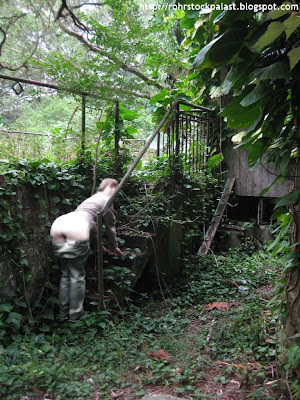 All witnesses described her very similarly, her dishevelled clothes and her posture, bent-over, her head turned around, he eyes looking back over her shoulder, as if she was awaiting someone or something. Who she was and what or whom she was looking for, no one knew, though. 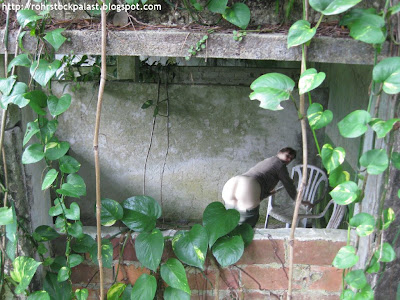 But one day a lucky witness managed to take some pictures. And so the desperate villagers decided to publish them in the hope to find out more about the ghost of the old, haunted house.

Maybe someone can help with some hints about the mysterious young woman's identity and history? What has happened many years ago and why is she still coming back to that rotting place? Maybe we can solve the riddle together. Please post your ideas and investigative clues in the comment section!
Posted by Kaelah at 7:30 PM

The first idea that crossed my mind was that there might be a connection between the mysterious implement spotted recently
http://rohrstockpalast.blogspot.de/2012/03/mysterious-evidence.html
and this phenomenon.
Maybe she is doomed to haunt this place until her top can find the cane which got lost in the train.

Is this the same old derelict house where, so the story goes, a villager once decided to venture alone after dark?

Some called him brave, others foolish. Nevertheless, he thought that the mystery could only be unravelled by holding a lone vigil in the house.
He was gone no more than an hour before running back to the sanctuary of the village, swearing that he would never go near the house again.

When questioned – after a couple of stiff whiskies to settle his nerves – he recounted how he had entered through the broken door, into a hallway that was eerily cold. He crept into the living room which felt even colder, apart from one small location in the middle of the room, about three feet above the ground, which seemed strangely warm.
Puzzled as to how this could be, he then heard faint noises. Voices. Mumbling, followed by barely audible gasps and moans. Then what sounded like counting. Very slow, deliberate counting. One..... two..... three...... with more moaning in between the counts.

Suddenly, with no warning, something – or someone – struck him. On the bottom. Hard enough for him to gasp aloud, and take his hands to his buttocks in a reflex action.
He turned around, but nothing was there. Overcome by panic, he fled the house, hands still grasping his smarting rear as he ran.

About 150 years ago, a girl was born to a god fearing couple. They had been childless for many years, and were overjoyed that their most fervent wish had been granted at last. They promised the little baby at her crib, she would never been harmed and protected against any danger threatening her well being.

The child grew up in the midst of a wilderness of trees, flower beds and many household animals. Whatever she wanted was granted right away.

As was to be expected she grew bored eventually when she got whatever she wanted, and developed into a veritable brat. Her parents never checked her behaviour and Haleka terrorized everybody in the small village. Most adults would caution her parents to take firm measures. Otherwise, the child could get out of hand as a teenager and become a criminal. But these were blind to the child’s faults and evil pranks.

As was to be expected, Haleka not only disobeyed and ignored her parent’s wishes, but also disrespected other people’s property and eventually endangered her own life. She was careless, negligent and disobedient.

Deep down she knew, that she was naughty and wanted to be corrected, as were all the other children of this time who felt the birch regularly. However, her parents simply did not see the obvious; she was not punished for her naughtiness, even if she asked for it by all her constantly impudent behaviour.

Haleka had one dream recurring nightly: She saw a girl raising her round bottom high into the air begging for the stick to be applied with force. But why was this occurring in a totally run down ruin of a house? Her parents little cottage was tidy and in good repair, what was she dreaming about?

Well, dreams may have contents of yesterday’s events; but they also may provide a glimpse into the future which might become reality.

The young Haleka finally disobeyed one last time and fell off a very high tree she had been forbidden to climb up. She died miserably. Her elderly parents never got over their deep grief and died a few years later, one after the other. The little cottage did not find a new owner and was overgrown with greenery, the walls falling apart with time, windows black holes.

But Haleka was haunting the ruin all these decades demanding that exemplary punishment, her parents had not dealt out to her. Even today, she was seen occasionally offering her bottom to the stick.

One of these days she will be reborn as Kaelah and a certain shiny knight by the name of Ludwig will finally give her the cane with vigour she was asking for over one and a half centuries.

Seems pretty straightforward to me. It is well known that at specific periods of the lunar month certain young women derive strength and fulfillment by absorbing the sun's rays. The necessary angle can be optimised by the method shown in the photos. ( An alternative to dancing round Stonehenge in the buff in June.)

Loved this report :D Made for excellent goodnight reading. Keep up the impressive reporting.

@ Fenris:
Good thought! I will look out for a ghost top the next time I see a cane on a train. Maybe I can help him to find what he is looking for and the two will finally be reunited. :-)

@ Steve from Kent:
Yes, I think you are right, it is the same house! :-) The poor guy left the village a short time later, though, and refused to talk about the haunted house and his experience ever again.

@ Donpascual:
A wonderful story and an interesting theory. :-) And it doesn't only explain, why I am a spanko. It also explains why I always obeyed my parents as a kid and why I am afraid of heights. ;-)

@ MasonPearson:
A special method of sunbathing that brings strength and fulfilment? Sounds cool! Although dancing round Stonehenge sounds like a nice idea as well. :-)

@ Morten:
Welcome, and thank you very much for your kind comment! I'm glad that you enjoyed the story. :-)