At the Circus (Part 1):
My First Visit 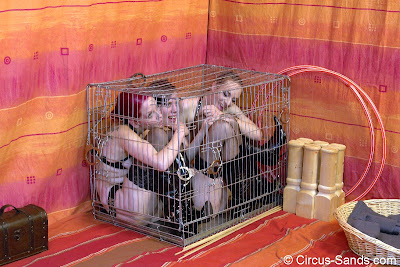 (Petgirls Marlin, Jane and Gundula, from l. to r.,
waiting for some attention)
As Ludwig already announced in his Semi-Hiatus post, we went to a SM-Circus shoot in August with the lovely Pandora Blake. I've meant to write about it for a while, but Ludwig and I wanted to tell you about an earlier visit to the Circus first. Ludwig had planned to write that report himself, but since he didn't find the time, we finally decided that I'm going to write the complete trilogy.

The Circus anniversary party I'm going to write about today was a bit more special for me, anyway, because it was my first-ever visit to the Circus. The anniversary show took place back in 2010, on the fifth anniversary of the SM-Circus (or, as it is now officially called again, Circus Sands). Direktor Sands had invited many friends for the live show.

Ludwig had already been to the Circus two times, one time with Niki Flynn and Amelia-Jane Rutherford, and a second time with Pandora. I had met Direktor Sands and the SM-Circus crew after Pandora's first shoot and at the BoundCon in 2009, but I had never been to a shoot or one of their shows. So the anniversary show was my first live event at the Circus. The show was not just performed in front of the live audience, though, it was also immortalized on film. 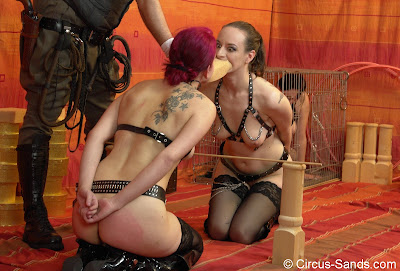 (Marlin and Gundula engaged in a sponge fight.)
The stars of the day were the three petgirls Marlin, Jane and Gundula. They competed in different challenges, for example the sponge contest, limbo, blind searching, ponygirl training and even Russian Roulette! Herr Direktor Sands only shot a ballon, but I was still very happy to watch from the safe distance of the auditorium.

The nice thing about the Circus and its petplay shows is that the show is only partly planned in advance and lots of things happen spontaneously. The loveliest scene on that day, from my point of view, was such an unplanned stunt, performed by petgirl Jane. She had found a dog bone and was so fond of her new toy that she didn't want to give it back. Direktor Sands insisted on her giving back her toy because he wanted to start with the final feeding of the pets. Jane pretended not to know anything about a bone and hid it behind her back. 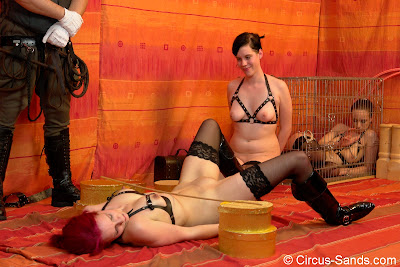 (Marlin doing the limbo.)
Direktor Sands's final threat: “If you don't give me the bone right now, you won't get fed today.” Without hesitating, petgirl Jane grabbed her toy, walked (or, better, crawled) past a stunned Direktor, climbed back into the cage and closed the door behind her. With a triumphant grin on her face and her toy in her paws she watched Marlin and Gundula being fed.

After the first part of the show there was a break in which a band called Kyoll performed live. Kyoll had also given the Circus a great gift, they composed and recorded music for the videos of the Circus. For their live performance, Kyoll was accompanied by a beautiful young dancer called Galatea.

Obviously one member of the band had been very impressed by the circus show and Direktor Sands's counting system for punishment strokes, because he suddenly shouted in the direction of Galatea: “Dance for us or you'll get sixty!” A risky idea given Galatea's enormous finger nails. She chased him for a moment, but he got away lightly... As you can imagine, Ludwig was very amused by that particular scene. 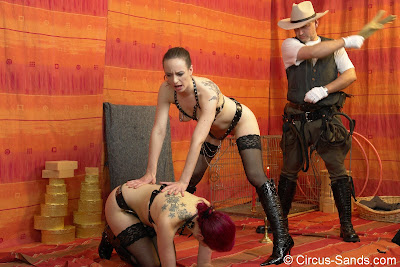 (Gundula chastised for one of many misdeeds.)
After the break, Marlin and Jane participated in an interrogation game, one after the other. They wrote a number on a piece of paper, the secret information they were supposed to protect. Then they entered a circle, subjected to Director Sands's interrogation methods. The game was over once they either left the circle or gave away their number. Director Sands tried various different torture methods on both of them: whips, tasers (gladly the big cattle prod wasn't used) and clamps. Both participants proved to be very tough and only gave in after a long time!

With the interrogation scenarios ended an interesting and funny event, my first live show at Circus Sands. Everyone gathered together for a bit of small talk afterwards. I very much liked the relaxed atmosphere at the Circus. At that time I had no idea that I would be back for a shoot less than one year later, though. And this time I would be involved in the action as well! You'll hear more about that in my next two Circus reports. 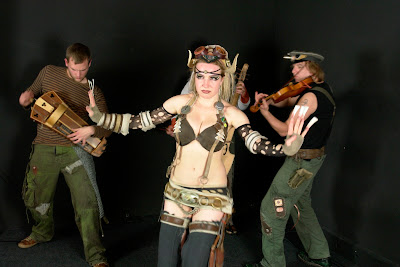 (Kyoll and dancer Galatea in action.)
Posted by Kaelah at 11:54 PM