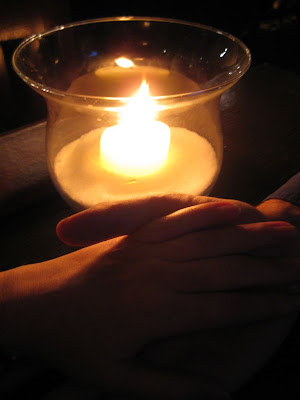 This is part two of my account on Ludwig's and my relationship as mates. Part one covered the beginning and the development of our relationship. Today I would like to write about our present life and what having found my mate means to me.

Our relationship today is based upon the values we already used in our first play scenario. We are very open and honest with each other – even to a point where it sometimes really hurts. Living several hundreds of kilometres away from each other doesn't make that any easier. Have you ever discussed your intimate desires, feelings and fears on the phone – eleven hours during the night? But I need that very special openness and honesty to grow from the things I learn about myself and us and to completely and absolutely trust Ludwig. Sometimes it hurts – bit it doesn't kill us, it makes us even stronger as mates.

With Ludwig, I also started to understand what kind of partner and relationship I have always been seeking. I used to pretend it was highly important for me that a partnership shouldn't reduce my personal freedom and self-dependency. Today I'm still sure this is right, but it's not the whole truth. I also need a partner whom I see as the very special one person I have always been looking for and who sees me as the very special mate he wants to exclusively share his life with. Two like-minded people standing by each other and – if necessary – fighting together against the rest of the world. With a partner like that it is also okay for me to be weak sometimes and to ask him to protect me and to catch me if I fall. Surprisingly (at least for me), with Ludwig, asking for shelter doesn't feel like I'm losing my self-dependency. It feels like I'm gaining something special I have always been looking for. Someone who is open and honest with me face to face and doesn't avoid conflicts if necessary, but who never carries those conflicts out in front of others and instead backs me up. And, of course, my image of an equal partnership includes that I want to do the same thing for Ludwig.

The picture I have about that special partnership is also correlated to my kinky fantasies. They are usually about two people who have a very special, unique connection. That was what struck me like thunder when I started to explore the internet on the topic of spanking and came across the stories of Mary Catherine and Dean Andrew Michaels. They had exactly that special kind of relationship I had been looking for. While in my fantasies the top might be in charge and might even act very dominantly in a one-on-one situation, like in my "Klingon Sex" scenarios, I love the thought that both, top and bottom, stand as one and equally protect each other in front of other people. That's one of the reasons why the idea of playing in front of others bothers me. There is a high risk that I would feel betrayed and used (in a negative way ;-) ). Only very special scenarios could work for me there. I think I'll write a detailed post about that topic some time in the future.

Fact is, I know that Ludwig won't ever betray me and that he'll always treat me with openness, honesty, love and respect. And it's the same vice versa. I could go on for another 2000 words about what our relationship and having found my mate means to me. It would surely involve words like great gratitude, act of divine providence and feeling at home. Instead, I'm going to leave you with a poem I've written on the topic. I'm going to post the original German version as well as an English translation.

By the way, in case someone was wondering about the title of today's post: You're right, the title isn't entirely correct. You don't see what's wrong with it? Well, the correct wording should be "Tigress And Dragon". Why? Because those are two of the nicknames Ludwig and I use for each other. :-) Two strong animals, not in need of a partner, deciding to continue their journey walking side by side...

On a common journey -
walking side by side.

Honesty and openness -
cornerstones of our relationship.
Honour as the base
for treating each other respectfully.

Blind trust -
falling and letting go without fear.
Remaining responsible for oneself,
assuming responsibility for one another.

The courage to set off together
into an unknown future.
Sharing pleasure and pain
life brings.

Leading and being led
depending on the situation and energy.
Not necessarily co-ordinate
but always at eye-level.

Mutual care -
being there for each other.
Mutual strengthening -
standing by each other.

Never giving oneself up,
but discovering new traits together.
Allowing each other great latitude -
providing security as partners.

Cuddling and keeping each other warm,
holding tight and letting go.
Feeling close in the distance
through hearing your voice and your words.

One thing deeply scares me,
didn't know it when I was alone.
Fears have risen,
fears of death and loss.

Infinite love -
elixir of life.
Without you as my mate
life isn't worth even half as much.

Thanks Kaelah - lovely post - and it does seem quite extraordinary how well you fit together.

On the public play issue, it is a completely different experience and mindset to playing in private. It's nowhere near as intense: with added distractions, you don't get the same bond between top and bottom. The upshot of that is that I doubt you'd actually end up feeling betrayed and used - or at least, that's been my experience. I do play scenes that I wouldn't consider playing in public (those are the ones where if anyone else saw them, I'd feel used), and yet there are other scenes I have no problem with. Does that make sense?

Anyway, thanks for the uplifting post. You've described exactly the way I've always thought love should be, and it's wonderful to see that it can exist in the way that it clearly does for you, despite the long distances involved.

Thanks for updating the link to the Universe, Ludwig, and a happy new year to you.

Another very interesting post, especially as I read it directly after the description of your Klingon tea ritual (spanking to appear in part IV or V, no doubt, lol).

I find it quite interesting that you use the Dean Michaels/Mary Catharine stories as an example of the special kind of relationship you were looking for. I enjoyed those stories very much, too, but ultimately, I see their relationship as that between a mentor and a young charge, rather than as between two equal adults.

Have you ever discussed your intimate desires, feelings and fears on the phone – eleven hours during the night?

Yes ... Tom and I were long-distance for the first two years of our relationship. It's really hard, and really intense, and gives your relationship a different flavour than when you're living locally. I think it's quite good for a new relationship, because you end up talking so much and longing for each other so acutely - but it quickly gets miserable if it goes on too long. I have no doubt that you two will find your own pace, though. :)

Guilty as charged, but hey, at least I won't miss out on any of your posts anymore ;-)

@ cath:
The differences between public and private play you describe definitely make sense! I guess in my case ritual spankings or something that has to do with my heroine-fantasies could work in public. But since being betrayed in front of others is a special issue for me and since I don’t feel much urge to play in public, Ludwig would have to be extra careful should we ever be in that situation.

@ Indy:
You are right, Dean Michaels and Mary Catherine aren’t equal adults. What intrigued me was the way they protect each other in front of other people. I guess I assumed that this must also be important for the relationship of the writers of the stories. And I also assumed that they are adults living out those caring guidance spanking fantasies I like but having an adult relationship as equal partners otherwise…

@ Pandora:
Living in a long-distance relationship definitely has its pros and cons. The good things are learning to value the limited time one shares and talking a lot on the phone. But sometimes, when you need to be cuddled or would love to embrace your partner, it can be really hard to be that far away from each other! And the travelling takes a lot of time, too.

Kaela, what a beautiful post. I'm only just cathcing up on blogs and while I'm sorry I missed this while it was fresh it was a beautiful thing to be surprised with this morning.

I know exactly what you are talking about, actually. Frank and I had an ocean between us and had many midnight phone calls (though they were more midnight for him, because of the time difference. Hundreds of emails, too. Though we moved pretty quickly and the long-distance part of our relationship was actually only a few months long, it was such a roller-coaster of emotion.

I agree with Pandora that it does have its benefits--the communication was so good and so detailed because it was all we had. In fact I know there are times when we both sort of miss that depth of communication. (though I wouldn't trade back to it for the world.)

Catherine and Dean Michaels were important to us, too, and I have a happy memory of some of our first play together being framed on some of those stories.

I found the same thing as catherine with public play: it tends to be a lot more "play", much more light-hearted and pretend. I don't usually find it to be an emotional experience and don't expect it to be intimate or "meaningful" in the same way as public play. But everyone is different, and I think it helps to have a streak of exhibitionism, which obviously not everybody has!

All the best to you both!

It's good to see you're back!

Yes, a long-distance relationship is a mixed blessing. I think that the intense written and oral communication helps to learn a lot about each other and to build a lot of trust in a rather short period of time. On the other hand, it sometimes feels like a strange mixture of being single and living in a partnership. One can't share the normal everyday life and misses each other a lot (the cuddling, sleeping next to each other, eating breakfast together...). Like you said, it's really a roller-coaster of emotion!

I can understand the difference between private and public play. What I think would be the most difficult situation for me is something I consider being a "mixed" form. "Private" play involving more than two people. I think that these sessions can be quite intimate and I'm not sure whether I would (already?) feel comfortable in such an intimate situation with someone else other than my mate...