While Mood Pictures finish the post-production on part one of our women in prison "documentary" and I write the final part of my behind-the-scenes report, here is a nice little whipping clip from the big screen to keep you entertained. Fittingly enough, it is about... women in prison!

Actually, "big screen" might be a bit of an exaggeration - the scene is from an obscure old exploitation flick from 1969, titled The Detention Girls. Starring Dolly Abrams, Jennifer Early, Ann Welles and a bunch of other people I've never heard of. At the time of this writing, it still has less than 5 votes on IMDB, so it doesn't even have a user rating (probably all for the better). But whatever one's opinion on the cinematic merits of the film might be, you can't deny that the poster is frigging awesome: 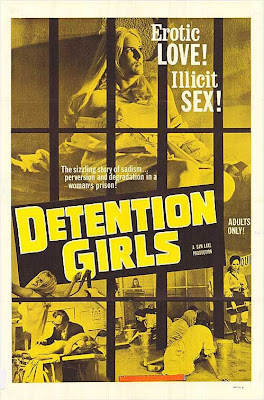 The movie is about a pretty American college student who is arrested for taking part in a campus demonstration. At the detention center, she encounters - what else! - lesbian guards, lesbian inmates and lots of abuse from both. Her troubles reach their climax when another inmate splashes water on a guard and blames it on our heroine (hmm, splashing a guard, that reminds me of a scene I recently filmed...). She is taken to the basement and savagely whipped.

While the picture quality isn't great (it was a cheap black and white production), the scene stands out for several reasons. First off, the action lasts a solid three minutes, pleasantly long for a simulated CP scene. Secondly, it is well filmed, with a nice variety of shots. Most importantly, the victim is very convincing. She is rather forgettable as an actress during the rest of the film, but here, her grimaces and blood-curdling screams constitute some of the best "fake whipping acting" I've ever seen. Quite a talent in that department. If I had to give out an annual Scream Queen Award for scenes like this, this girl would get the 1969 trophy.

I love those B-films and exploitation films from the 1960s, with a lot of whips. That's why I many years ago bought 5 vhs cassetts from WSIM, whipping scenes in movies, where this clip is included. Now they sell this big collection on dvd. But many clips are low quality copies, some times American films dubbed in Italian and with Chinese subtitles. Or the other way round. Still worth looking at, for the aficionado.

Frants: Ages ago, I ordered VHS cassettes from WSIM, too. Oslo Netfetter, the guy running the website and making the tapes, was one of my first kinky email correspondents. Pity that he disappeared. Copies of the original site are still on the internet. I plan to write an homage to Oslo and his work someday.

I have put you on a friends list thingy, in a post from March the third. It is a sort of "pass it on if you want to" meme type thing. Hope you don't mind.

LOL at your last line. Apparently the meeja are predicting a SUMMER OF RAGE about the recession, with thousands of people taking to the streets. I suspect they're in denial about the reasons for it, but whippings would certainly make it more interesting. We could organise a spank-in! Free beatings for all!

Prefect: Thanks for the meme, I just blogged about it here.

Hello Ludwig,
I'm new to your blog and I just watched the Detention Girls clip. Like Frants I also love those '60's movies. I remember a film called "Sock It To 'em" where a young actress loses it after her father, a famous actor, dies and she shoots a couple that took her to their home to "worship" her body...well ok, have sex with her. It also featured a whipping scene at a large party with lots of young starlets. One of them is picked up by a man and she ends up in a large room with cages. There a bunch of party goers is watching how girls (and boys?) are being whipped in each narrow but deep cage. And , believe it or not, our girl is being whipped by a woman with a bullwhip. And these were the sixties, so with each (fake) stroke of the whip, she presses her body against the bars and her breasts get a sudden intrest from a woman in the public. She comes over to the cage, falls on her knees and starts to play with herself. Indeed the good old sixties!

Spankman51: Thank you for that tidbit of info. Unfortunately, I can't find anything about a movie called "Sock it to 'em" - neither on IMDB nor on any of the helpful kinky "CP in the movies" lists that exist on the internet. Maybe it is too obscure, or you saw it under a different title (many sexploitation flicks are known under several names). But I'll keep an eye out for it if I ever run out of mainstream whipping scenes to blog about.

Wow. People have neem looking for this film for years. Thanks for posting this great scene.

I have read that there are two more CP scenes in this movie. A scene where two girls are paddled and a scene where a girl is given the belt. Is this true? And if so is there any chance you could post them somewhere? :)
I'm dying to see them if they do in fact exist.

@ Anonymous: My apologies, I somehow missed this comment when you posted it two months ago. In case you are still reading, it deserves a quick reply.

The whipping scene you see here is the only scene I have of "The Detention Girls". I don't have the full movie and I have never even seen the full movie. So I don't know if there really are more CP scenes in the film. It is very well possible, of course, given the subject matter. *grins*

I am not sure whether a DVD version of "The Detention Girls" exists. The whipping scene which everybody knows seems to have been digitised from a VHS tape a long time ago, and is part of various whipping scene collections which you can find online. As for the full film, you might be able to purchase a copy of it from some site that sells obscure old, out-of-print exploitation films. I did a quick Google search and found nothing, but you might be more lucky.