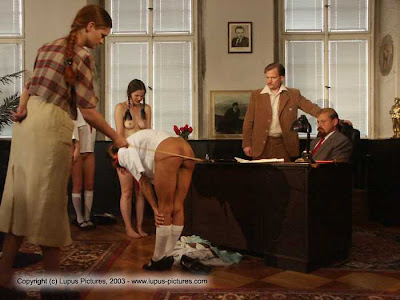 Great review as always, Ludwig. But what's with the picture? The woman doing the caning looks like a giant compared to everyone else.

"The woman doing the caning looks like a giant compared to everyone else."

True. I hadn't really noticed it before. It's regular Lupus domme Alexandra Wolf, and yeah, she does seem to be quite tall. I just had another look at the movie. She towers almost a foot over the girls, I'd say.

Looking at some pictures from "The Exchange Student", where you see her standing next to Niki Flynn (whose height I know), I'd say Alexandra is probably over six feet.

Just a tall woman, then! Not a bad trait in a domme.

"Just a tall woman, then! Not a bad trait in a domme."

NO, but it does lend a fairy-tale-like quality to the whole story -- as though it's something taking place in someone's dreamtime.

The fact that she's closest to the camera, and that the nearest girl is bent over, exaggerates her size, especially relative to the guys behind the desk. They look like dwarves compared to her. Mostly that's due to perspective foreshortening, but somehow this pictures deprives us of the clues to read that perspective unambiguously. All of which conspires to make for an interesting picture.

Great review, Ludwig. Thanks for writing this - not all Lupus films are for me, but I think I definitely want to try and watch this one at some point.

This is my favorite Lupus film, that I have seen to date. Not only great action scenes but a thought provoking story of how all the characters are put into an impossible situation by an innocent childish prank and how even the extreme measures taken where no protection from even worse consequences, illustrated by the arrival of the real bad guys at the end of the film. Thanks for reviewing ths.