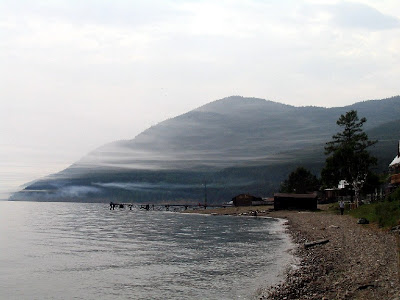 (Lake Baikal in the springtime)
Dobry den! Good day! I've been trying to improve my feeble Russian skills lately. It took a lot of planning, but now I can officially announce that I will get on a plane to Moscow this afternoon. The rest of my semester holidays will be taken up by a voyage across the Motherland.
I always wanted to visit Moscow, so this will be my first stop. I plan to see the Kremlin, the Red Square, the Bolshoi Theatre and all the other famous sights. And, if everything goes well, you will get a world premiere on this blog, the first ever interview with the makers of Discipline in Russia. I contacted them a few weeks ago, and while it seems that they don't have any new shoots for a while, the producer said he would be happy to talk to me. I'll bring along a taser and a can of pepper spray just in case. You never know with the Russian mob.
If I'm still in one piece by next week, I will board a train on the Trans-Siberian Railway. That is another lifelong ambition of mine, a dream come true for any historian. There will be a few short stops along the way. The most interesting one awaits me in Novosibirsk, where I will pay a visit to Dr. Sergei Speransky, the inventor of "therapeutic caning". I wrote to him, too, pretending to be a psychology student, and what can I say, they just love guests from the West! So I'm going to chat with this doctor at the Novosibirsk Institute of Medicine, and maybe I can even arrange a little "demonstration" for me. Preferably by one of his female assistants. They claim that the cathartic endorphin rush is bigger when you are flogged by a person of the opposite sex, but in all honesty, I didn't really need a scientific study to tell me that.
With that little interlude behind me, I will probably have to stand upright for a few days while the train takes me further east. I'm looking forward to a walk along the shores of Lake Baikal, one of the most beautiful natural sights in the world. And maybe a swim if temperatures permit. Finally, by early May, I will arrive in Vladivostok. After a short flight to Seoul, it will be time for a trip to the infamous Seodaemun Prison. The site is now a museum and showcases many interesting torture devices used by the Japanese during their occupation of Korea. Once I emerge from the catacombs, I will return to Munich via London Heathrow.
Sounds like terrific fun, right? Can't tell you how much I'm looking forward to my Kinky (Trans-) Siberian Holiday. I certainly deserve it after the recent university exams, not to mention the work on blogging and corresponding. Speaking of which, I hear that the internet connections in Russia are a lot better than one would expect, so I'll try to hook up my laptop and keep you in the loop.
Right, the bags are packed, the taxi to the airport arrives in a few hours, I'll be off soon. Dasvidanja!
Posted by Ludwig at 5:29 AM

What? And you didn't invite me? Surely a proper researcher should bring his own subject and observe the effects of this "therapeutic caning" objectively before self-indulgently tasting its effects himself.

And I thought we were friends. **pout, sulk**

Wow! What a trip. Looking forward to your travel reports. This is ground breaking stuff. Kinky west meets kinky east, or something like that!

Lets hope the internet access in the east is as good as you hope. World roving kinky blogging need someone to head east, theres not much news about whats happening further on than central Europe.

Bcevo xoposhevo moi droog! (damn non-cyrillic key board). Don't drink all their vodka! When you get to Korea beware of a foul tasting and smelling dish they will try to get you to eat called kemchee. The worst of the horrors you must face, according to your itinerary and the BBC, will be the new terminal 5 at Heathrow! If you survive all of that just leave the microfilm in the usual drop box. Doe bope shee da! (damn non-Korean key board).

Wait a minute! Just look at the date here! You wouldn't be playing an April fools day joke on us, would you old man?

Just the idea of going to Siberia for the holidays is kinda kinky in itself. Are you sure you're not a masochist?

The silence is deafening. If that was all a wind-up, man, you're in soooo much trouble...

"And you didn't invite me?"

Niki, maybe you could offer to come along as Ludwig's "pet". I'm sure there must be room in the baggage car for pets and such. Hey, you could be a Siberian Husky! You'd just need to get yourself a white fur coat. Probably even the summers are cold there in Siberia. Although you might be lucky enough to meet someone like the fabled "Anastasia" and she could teach you how to stay cosy in just an animal skin mini-skirt.

I remember reading about a pet food buyer who used to sample the pet foods and evaluate them prior to making a purchase for the store or chain of stores he represented.

Well kids, I think we've been had. Not even Ludwig is crazy enough to go to Siberia this time of year. Do you think that a history student would repeat the mistakes of Napoleon and Adolf?

Right, I have changed the post label from "About Me" to "Spanking Humour". It was April Fools' Day, folks. Naughty me.

I travelled to Vladivostok and Seoul a few years ago, I also visited Seodaemun prison. They have an interesting torture device exhibition there. That much is true.

But I haven't fulfilled my dream of riding the Trans-Siberian Railway yet. If I ever do, I will take Niki along, and we can get thrashed at the Novosibirsk Institute of Medicine together. Or maybe they prefer if we thrash each other, as a scientific experiment?

Normal, truthful, "German seriousness"-style blogging resumes on Saturday. And that's not a joke.

Don't be too severe on me, ladies and lords. I honestly didn't think anyone would believe the story, anyway.

Ooooooh! It's lucky for you that I don't play M/m.

No m&m's here either. We'll just leave you to Niki and company and their devices. (you lucky bastard)

Niki and her devices. Uh oh.

And it looks like she's mad at me. Little Niki. All 50 kilograms of her. Boy, am I in trouble now...

A woman built like a tree! They called her "Bonsai"!

Hey Niki, are you going to take that last comment lying down? I think you need to show big bad Ludwig what you're made of. (and I'm not thinking of "sugar and spice and all things nice".)

Don't worry. He's got my clone pumping herself up in the gym like G.I. Jane, but he's gonna see firsthand what a monster he's created. **rubs hands together**

OK here's an idea, lets kidnap the "pumped up" Niki Flynn clone, send her to Cassie Hunter to be trained in the ancient martial art of "Manarsewhuppatie". When she graduates from the secret training facility in the frozen Yorkshire wast lands, we post her in a large crate marked "Best present ever" to arrive at Ludwig's residence on his birthday and then hope someone is there with a video camera to record the harshest birthday caning ever and share it with the rest of us.

Don't forget, I said "Niki and company." She has, in case you haven't noticed, a large and growing fan club many of whom are highly perverted and no doubt include a goon squad contingent of ex and current soldiers and such who may well be into m/m! Once you are trussed up she can easily sit back and turn inventions against you at say 40 strokes, 5 second intervals, (her sitting at computer tweaking intensity from 500 miles away)...

Also, it is interesting that you should mention the word "Bonsai", the battle cry of the Japanese imperial forces during WWII. I know my still living uncle will never forget it! I can well imagine Niki shouting it in full Japanese school girl costume while spinning an eleven foot rattan with well practiced judo-like accuracy!

Prefectdt - To be honest, I'm not too frightened of Cassie Hunter. I have nothing against her personally, she seems like a nice girl in her interviews and is certainly a good domme. But when it comes to technique and severity, I've seen (and experienced) more scary ladies at work.

If you're going to send the Niki clone into training, send her to a certain Lady Linda in Hamburg, Germany. That would scare me witless.

Tigerbutt - I'm not really into M/M play, so no "goon squads" for me, please. That would be too harsh a punishment in light of an April Fools' Day prank.

The Japanese cry you are thinking of is "Banzai". You know that, don't you! It's a term applied by Westerners, though, the Japanese didn't actually use it. They called it "gyokusai" ("shattered jewel"), a term for a suicide attack.

Don't worry, she probably won't send out her minions -this time!

Gyokusai? Well, I doubt my uncle had much time for translation when on the receiving end.