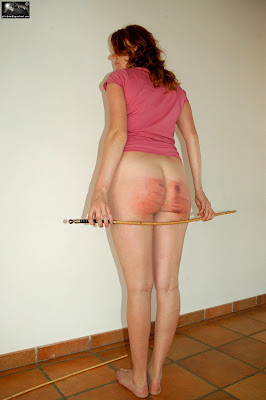 (Picture courtesy of Girls Boarding School. Some resemblance to lovely Josephine. Similar figure and hair. The marks looked about the same, too. Except for the one that went too high. Grrr...)

It's hard not to get all squirmy and subbie reading this. There's just something about knowing you're totally in the wrong and that the punishment is fully deserved. I don't envy Josephine, but I can certainly relate.

Whoever had the joy of caning this beautiful naughty woman, I say well done Sir, Well done. You have accomplished a great service to us. And I only wish I had the opportunity of punishing her myself.

sixofthebest: Err... "Whoever had the joy of caning this beautiful naughty woman"? If you actually read the post, you should know that it was me who caned Josephine (who is indeed beautiful, and naughty, too!).

If you are referring to the picture (more likely!), that's just something I took for illustration, from the "Girls Boarding School" site. Like it says underneath. So it was probably Headmaster Tom who did the caning on that one - I've seen the video to this scene, and I think he was in it. Not 100% sure, though.