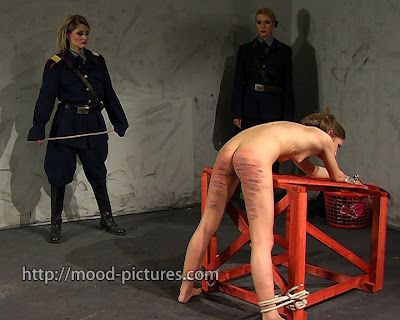 Producer:
Mood Pictures (released in 2008)
Entire Story In Fewer Words Than Are In This Sentence:
Tourists are caned and whipped
Victim Appeal:
Seven Hungarian girls get a healthy dose of corporal punishment. I won't describe them all in detail, but each one is good-looking and has a few lines of dialogue. The acting is average but not atrocious, and there is enough story to empathize with the victims.

The video is about a group of female tourists who are arrested for drug use. It opens with a strip search of one girl, then another girl talking to their lawyer, then all of them in their cell as they await trial. The following courtroom scene is fairly long, with a lot of scolding from the female judge and statements from all the tourists. The defence lawyer hardly says a word, which is fine by me - we all know where this is going, anyway, right? Some girls plead guilty and get a lenient treatment, others make a nuisance of themselves and receive a more draconian verdict. Not a single acquittal, of course.

It also goes without saying that all of them choose to commute their prison sentences, ranging from one to ten months, to corporal punishment (that option exists in the "South American country" where it is all taking place, though we never learn which country).

Gratuitous Sadism:
Large cast, lots of action. In the opening strip search scene, the girl gets her rectum examined, black glove and all. In the cell, another one urinates on the floor (she's not allowed to go to the toilet) while the rest of the group avert their faces in embarassment. After these humiliating appetizers, severe thrashings are on the menu as the main course.

Let me get my notes so I can remember this correctly. To begin with, the two girls who plead guilty get 10 cane strokes each. The third one gets 50 because she made a pass at the medical examiner to get the test results changed - how naughty! Next up, whippings. Three tourists who plead innocent get 50 lashes each to teach them how the local justice system works. And for the grand finale, the ringleader: she also had the audacity to plead not guilty, she gave the other women the drugs, and she had a violent outburst in the courtroom. 50 cane strokes and 50 whip lashes ensure that no repeat offenses will ever occur. Or maybe she'll just never travel to South America again, I don't know.

Best Reactions:
C.C. Graf, the model who gets 50 cane strokes. We never actually see her trying to seduce the medical examiner, and it's hard to imagine such a scene - the girl just looks incredibly annoyed and sullen throughout most of the movie. A lot of evil looks for the judge, the caner, the caner's assistant, everyone... However, that eye-rolling "Whatever!" attitude imbues her character with a certain stubborn, defiant pride. I love that.

Miss Graf (any relation to Steffi?) is also the most restrained during the punishment. Not a lot of screaming like some of the other ladies, but a sequence of delicious, half-suppressed gasps and yelps. Her facial expressions progress from grim determination to desperate hope that the ordeal won't get any worse, that maybe the next stroke won't be as hard as the last one. Most of all, she glows with the refusal to lose her dignity. She does cry in the end, of course. Just a little, before angrily wiping away the tears with her arm. Good stuff.

Best Line:
"Your honor, I would just like to apologize on behalf of my defendants." That is the only line the lawyer utters during the trial! He looks more frightened than the girls, actually. Did the judge beat him into submission before the proceedings started? And if so, why don't we get to see it? In any case, I find it hilarious.

Nice Psychological Touch:
I liked how the girls themselves decided to commute their prison sentence to canings and whippings. It's the sort of "semi-consensual" scenario I enjoy a lot.

What You Learned:
If I were in the tourists' shoes, I would commute my sentence to corporal punishment, too. Hell, I'll take 50 lashes by Mistress Larissa over six months in the joint any day! Then again, I'm a pervert. I'd make sure to plead not guilty to get a harder sentence...
Posted by Ludwig at 8:11 AM

I like he color of the caning bench no doubt chosen to hide the blood. I can't say I like the caners aim, unless she wanted to cover the back of her knees. Having traveled parts of the third world, I can tell you that brushes with the authorities are best paid off at the first police interface. If it gets back to the police station it becomes much more expensive as these ladies have learned. Nice review, thorough yet fanciful.

Actually, as Mood Pictures' dommes go, the caner is pretty good. The strokes on the legs are definitely intentional. I'm not a fan of that, really (stripes belong on the buttocks!), but for what it's worth, the strokes went where she aimed.

I wonder if the producers of this flick deliberately riffed on the title of National Lampoon's "European Vacation" movie of a few decades back.

Perhaps this is the first in a series. Next up might be "Tibetan Vacation", with special focus on Chinese style domination and interrogation. It could feature western "Free Tibet" protesters caught up in the local uprisings in Laasa, according to the ancient Chinese curse "May you live in interesting times".

Or "Abu Ghirab, School of the Americas Vacation Spa".

Or "I was a Mind-controlled Sex-Slave of the Reptilian Overlords and their Grey Alien Lackeys".

Not to forget the many worthily-despotic regimes of the former Eastern European Communist countries. Perhaps special grants would be available from the local "Ministries of Culture" for historical recreations of traditional customs of the cold-war era. We know Niki and Lupus have already "done" Stalin, but that's really just the tip of an iceberg.

Truly there's no end of suitable thematic material for folks like these.

For lovers of CP this is an exciting film. Being a fem dom enthusiast, I don't condone ladies being punished and I'd give just short of my right arm to take what Victoria Young ( the ringleader ) did from Mistress Larissa. Her follow-through action with the cane is sublime. Anyone into FD should take a look at The Painful Cane or the Lost Race series featuring Mistress Larissa which are available on hardpunishments dot com.

@ Anonymous: The site you mention is a collection of free galleries, not a producer's website, so I'm not sure what you are referring to. But you are right, Larissa was indeed one of the better (and more accurate) dommes Mood Pictures had.