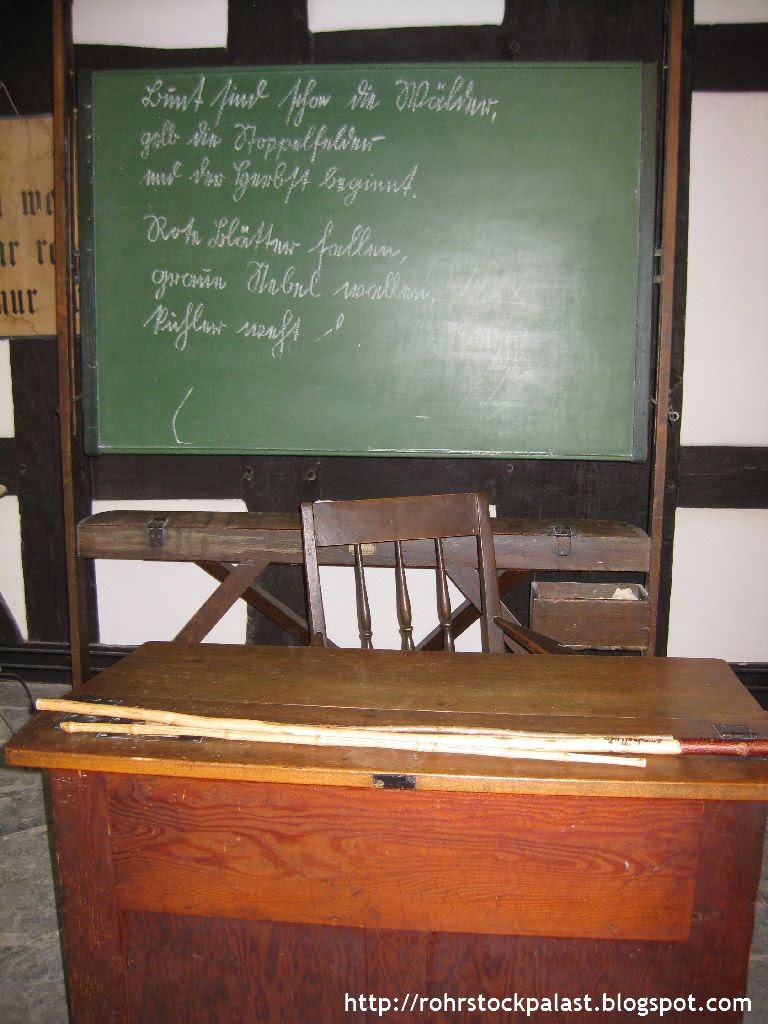 While school girl scenarios might not be among my most popular fantasies, I still have a thing for old school houses. The one on the top of this post is a traditional school house that I visited in Germany. See the canes on the table? I find the one in the middle very impressive. To me it looks like a real thick branch from a local tree which was peeled, except for the part that it used as the handle. I bet it produces more thud than its peeled rattan brothers and sisters. 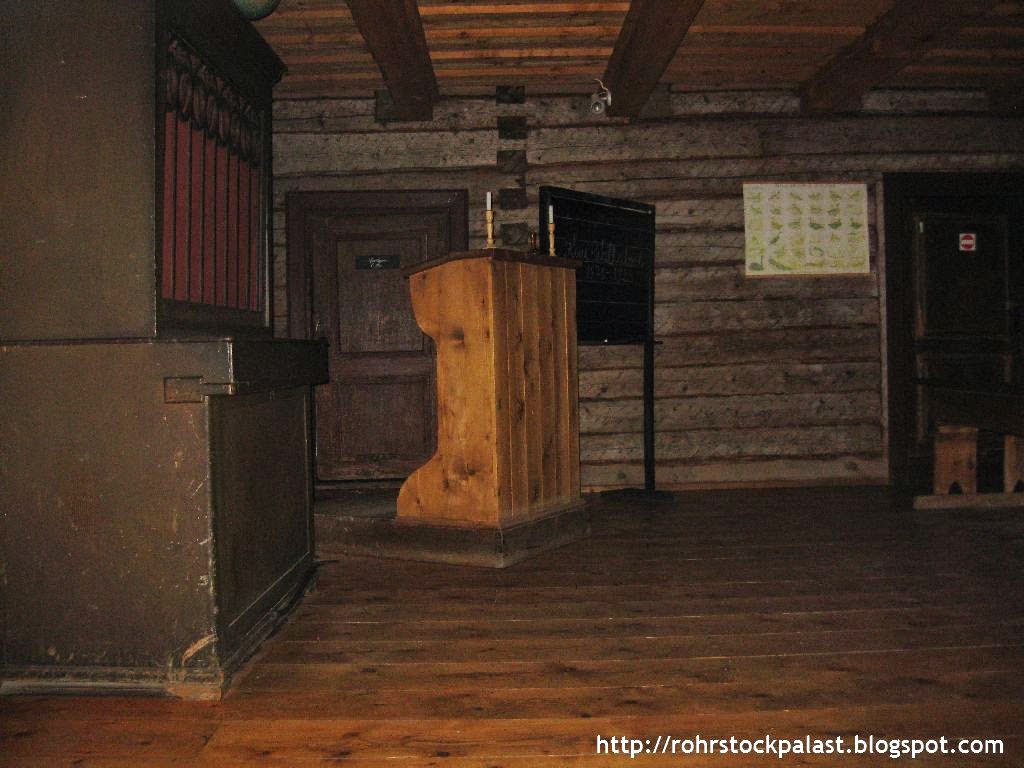 By the way, I wasn't the only one who showed an interest in the canes that day. For some minutes the barrier which kept the visitors away from the front of the school room had accidentally been left open and so everyone thought it was okay to take a closer look. Thus I watched quite a few people picking up one of the canes, explaining how the canes were used and even pretending to use them. Quite a strange view for a spanko at such a public place! 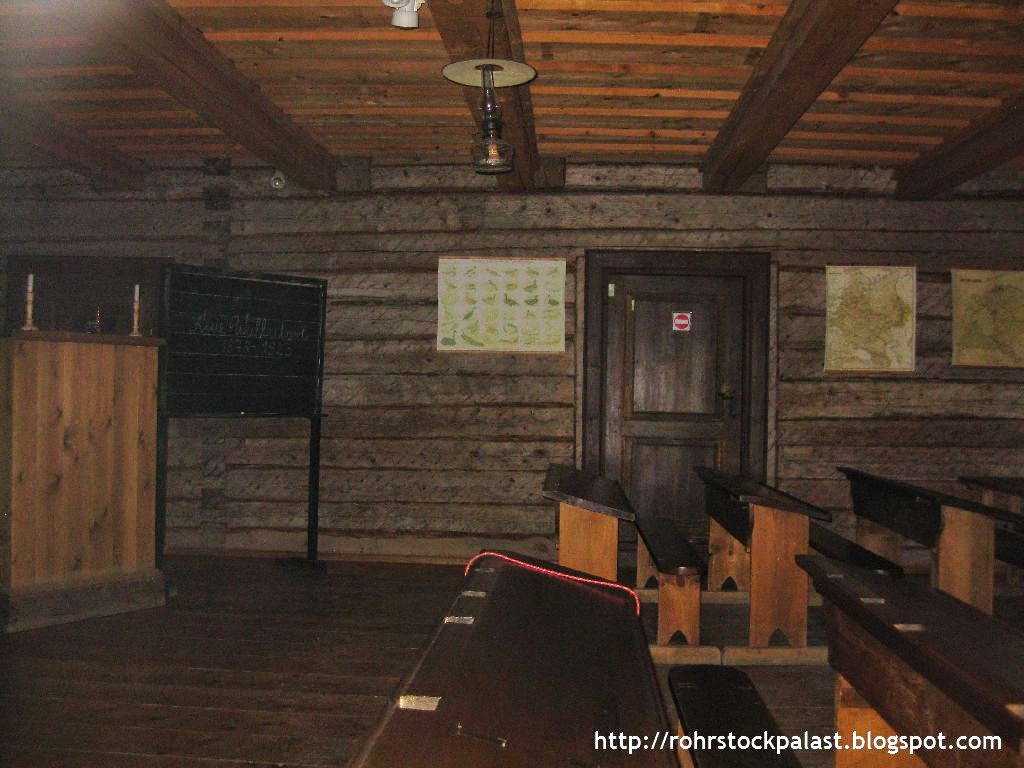 The second school house is one Ludwig and I came across during one of our holiday trips. I love the lectern in front of the classroom with the candles! And I like the fact that the wall, the floor and almost everything is wooden in this classroom.

In a museum, Ludwig and I also found this depiction of a school scene. One could pull the string that leads to the teacher's hand to let him raise his stick. I wonder who had that idea? 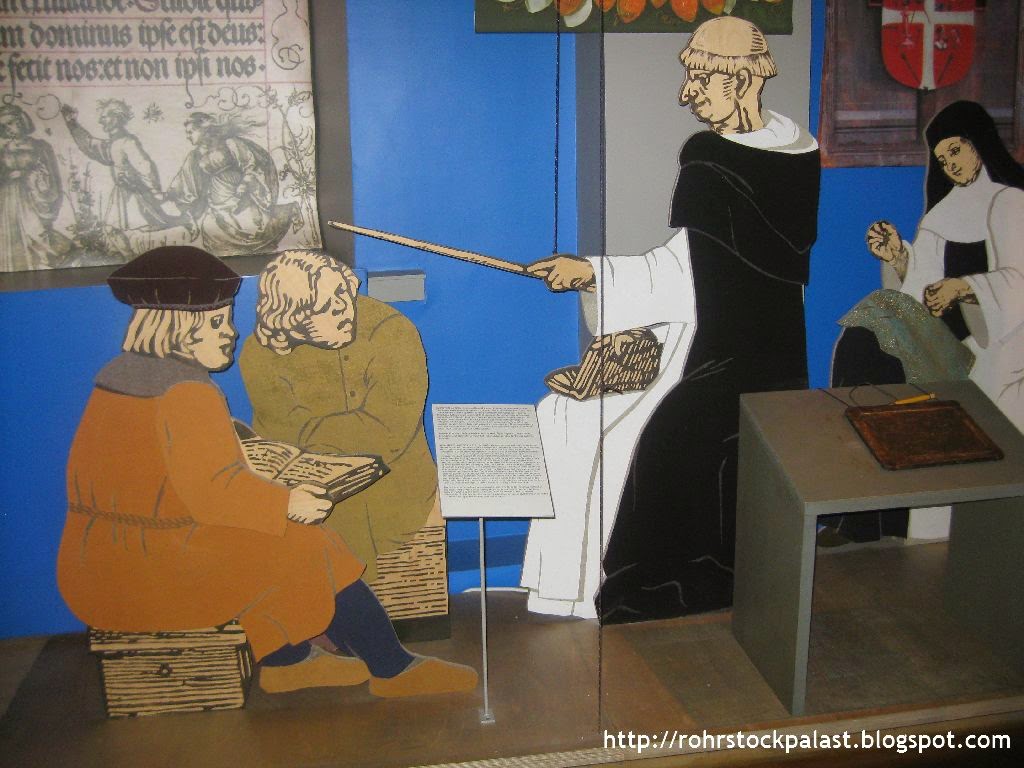 The interesting question kink-wise is of course, where do I see myself in such a classroom? Maybe in front of the black board like in this picture which we took in yet another museum? Well, I have to admit that I enjoy the idea of being a teacher. I love to give trainings in real life and in a kinky context my toppy side would be pleased as well. 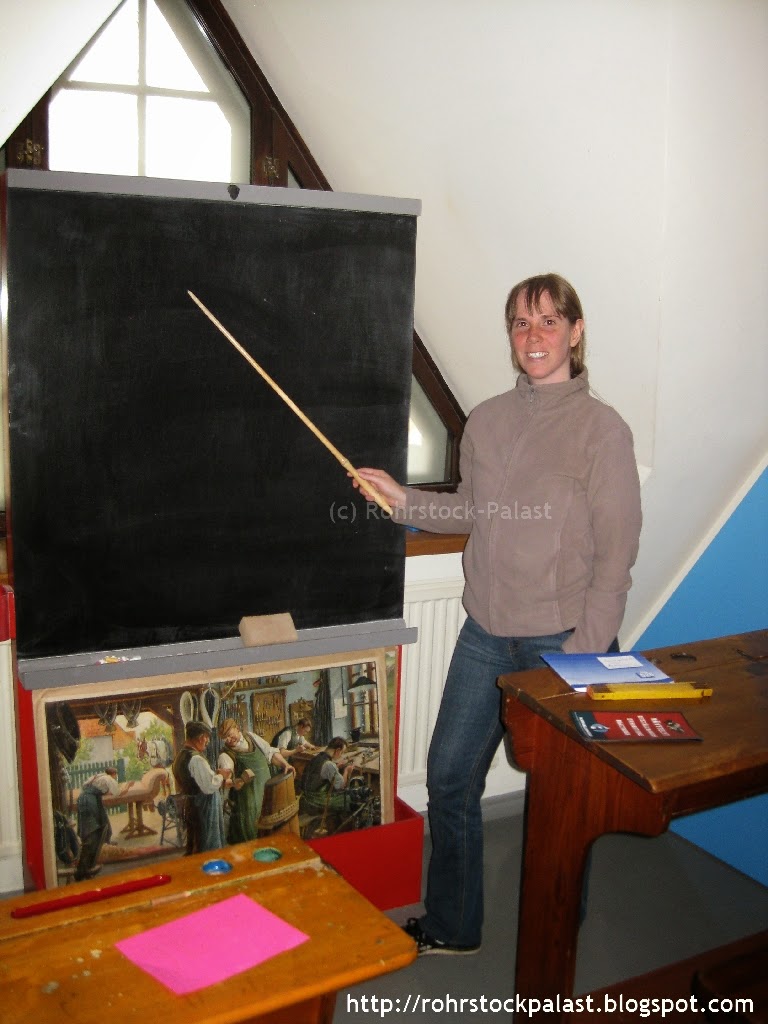 Of course being the naughty school girl that I never was could have a certain appeal as well. Playing pranks with my fellow classmates, knowing that this will most probably lead to painful consequences for all of us. 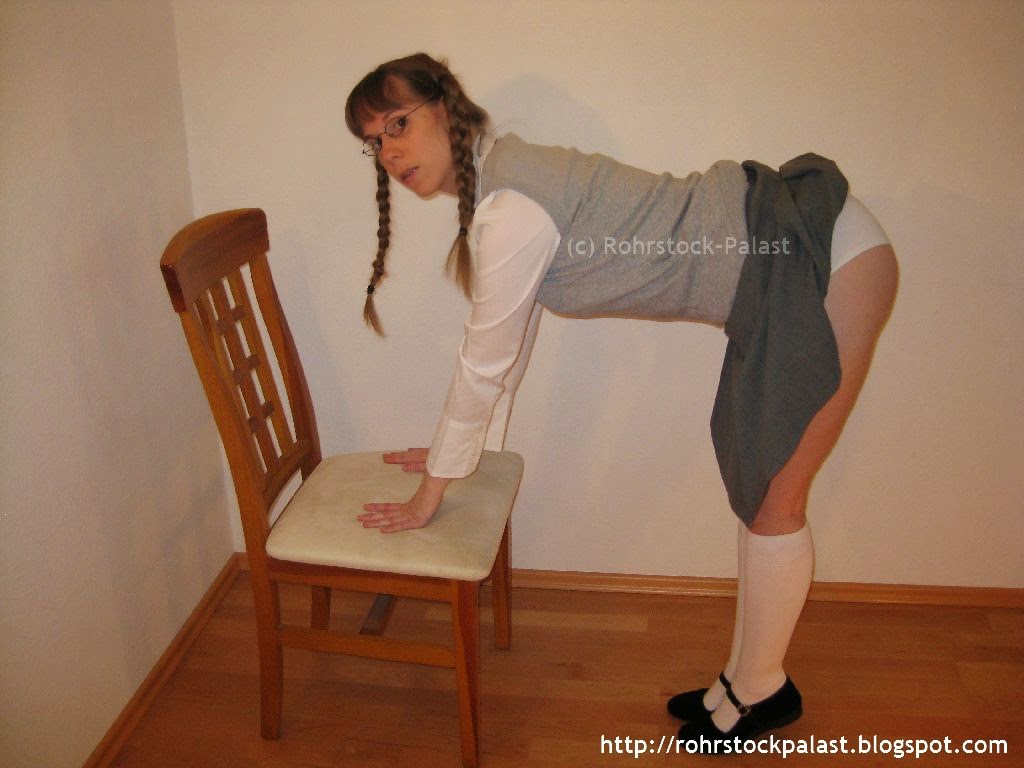 In my fantasy school house I definitely want a traditional blackboard, wooden tables and a lectern if possible. Plus school uniforms of course. While they weren't common in Germany, they are certainly part of my kinky school fantasies. And I want a mixed school class, or, even better, an all-boys school into which I have sneaked disguised as one of them (definitely no pigtails then). 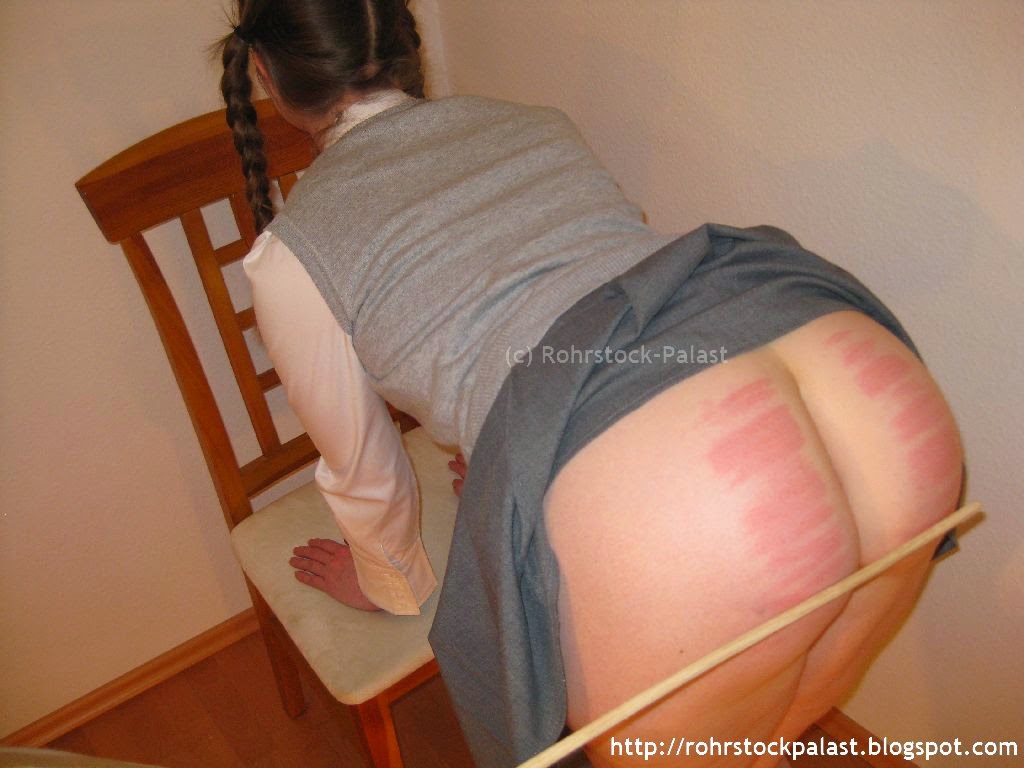 How about you? What would your perfect kinky school house look like? And which role would you play? Please feel free to share your thoughts in the comment section!
Posted by Kaelah at 11:39 PM

I am old enough to have been at school inthe 60s and 70s and saw the tawse being used, on the hands, whilst in Scotland and to have seen pupils coming out of the headmasters office after a caning in England. However neither of these experiences are reflected in my perfect fantasy school. For a start it is entirely staffed by women, from young trainee teachers, to more mature housemistresses and of course an incredibly stern but attractive headmistress. All the pupils are aged 18 and for some reason I am the only male pupil, Over the course of a term I am punished by prefects, teachers, house mistresses and the head in a variety of increasingly painful ways often in front of the whole school at assembly. The school itself is a standard school of the 60s but strangely has some rooms which are almost Victorian and one, the Heads special room for very naughty boys, is more like a dungeon.
As you can see my fantasy school accommodates virtually any scenario I can imagine which is after all the best thing about fantasy.

Looks like a great spanko holiday!
Glad you two had fun - always a treat to see a well caned bottom!
- Eric

In the good old days, such old-fashioned school rooms displaying canes, and birch rods did exist. Yes, the headmaster ruled that naughty female school-girls be corporally disciplined by corporal punishment implements. And many a painful 'swish', was heard and felt by these young teen-age school-girls.

In my fantasy school, the head's study leads through double doors out of the school library, where we have to wait before being called in. This is like the one at my prep-school - and a very awe-inspiring wait it was, too. Also used sometimes are the changing room (a good place to find lots of gym-shoes) and the class-rooms (on one occasion one was - yes, really - filled with a queue of boys waiting for their turn over the master's desk for a beating). One class-room in which I was taught in 1968 had extraordinary antique desks that had probably not been changed since the 1920s - and they were still there when I visited 20 years later. This has a replica in my fantasy school. And, of course, there is a very big semi-circular hall - like the one at my last school - which works well for public floggings.

My fantasy school is co-educational, and I am a pupil there. The staff is usually female, but sometimes there are masters to deal with the more willful girls.

By the way, you can think of me on Monday when I go to pay my losings on the World Cup bet. A (virtual) pat on the shoulder and a sympathetic "Good luck, Ernest" is in order! I don't think I shall be saved by the snow again!

Being 67 years young I attended school where the paddle was the weapon of choice for teachers. The Principal had a larger version with holes drilled in it. Hearing a smack followed by an Owww coming from a classroom was a daily occurrence. Boys and Girls both would be subjects of the paddle when I teacher deemed it necessary. If you went home and complained, you got it again.

In this little tale Kaelah plays Kitty my niece. In her pigtails and knee socks she looks so angelic but from my strictures in the train journeys through the UK it is clear that 'Kitty' is a very naughty girl.

She is the opposite of Kaelah - cheeky, lazy and full of mischief.
By standers will hear her frustrated uncle threaten her with a trip to strict Aunt Pandora. Some onlookers might twig that the scoldings 'you won't be sitting comfortably for a week, young lady' are a wind-up.

No bottoms will be damaged in this piece of performance art.

How very interesting question. First, I am old enough that when I went to school, especially in the first four years, the school teacher had at her disposal, and used liberally, these items that all hurt quite a lot: a ruler that I think would qualify as a narrow paddle, a fairly flexible pointer stick, and a length of pencil-thin very dense plastic rope. Applied democratically to girls' and boys' palms and bottoms.
A fantasy school environment is that of an all-female school where I, a male, teach calculus and quantum mechanics. The students are all teaching staff who must take remedial courses, coming from all types of school themselves; they are really not very good at math and science, so it is easy to see what's coming: it is my duty to encourage their study towards superior grades through frequent applications of corrective measures. These measures would include - anyone? anyone? - things such as caning, tawseing, paddling, and so on, upon bare bottoms. Now, the matron of the school would conduct periodic fitness evaluations of the teaching staff, and apply similar corrective measures when the results were lacking. So, what goes around comes around in this school, and I suppose that would satisfy the fantasy of switchy male teachers...

@ Simon:
That sounds like a very elaborate fantasy to me. Thanks for sharing!

@ Eric:
Yeah, we had a great holiday! The cane stripes are the result of a self-caning, though. A while ago, I wanted to shoot some school girl themed pictures and because Ludwig wasn't available, I had to do the caning myself...

@ sixofthebest:
Yes, I think I have got a picture how your kinky fantasy school would look like!

@ Ernest:
Sounds like you have a very clear idea of how your kinky fantasy school looks like! Unfortunately I am too late for the pat on the shoulder, but it seems that you have made it through your ordeal successfully!

@ Spankdaddy:
Thanks for sharing your experiences. I am very glad that I didn't experience those times. I guess I might have turned into an even shyer and more fearful person than I am today, anyway! But as a kinky fantasy for consenting adults it sounds nice!

@ Mason Pearson:
So it seems that you want to see me spanked by Pandora! Well, she is a lovely as well as sexy woman, so no complaints about that idea from my part. :-)

@ Val:
That's a very elaborated fantasy, too! Thanks a lot for sharing!