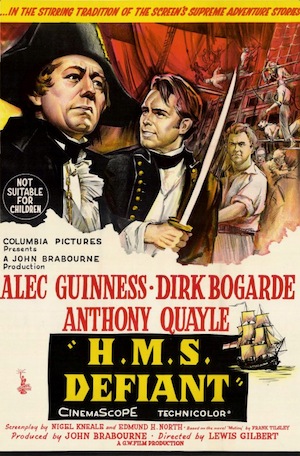 (The poster for H.M.S Defiant.
One of the films that inspired my kinky fantasies.)

In his recent post A Question of Perspective Ludwig asked the intriguing question which perspective our readers take when watching a spanking video – the one of the spankee, the one of the spanker or the perspective of an observer. For me, the answer is rather simple. I am usually an observer when watching spanking clips, and depending on the scene and the people involved I sometimes feel closer to the top's or the bottom's perspective. At times I also think about how cool it would be to meet or to make a clip with the participants or in how far I suppose our chemistry would fit in a scene. But that usually happens after I have watched a clip and I don't see myself in the role of the top or the bottom at the time of watching.

A related question I have been thinking about is which perspective I take in my kinky fantasies in general and during kinky scenes I am involved in. And secondly, how do I see my play partner(s)? The thing is, in many of my kinky fantasies I am not involved as a character. Take for example my naval fantasies. In those fantasies I am a kind of omniscient narrator who switches from mindset to mindset and sees the scene from the different views. The feelings of the bottoms are slightly more interesting for me, but I also need to know the feelings and thoughts of the tops in order to make the scenario complete.

I also have formal kinky fantasies which explicitly involve me as a person, though, or maybe rather an ideal fantasy version of myself. The thing that has given me a bad conscience about those fantasies is that Ludwig usually only appears in them as a background character. He is my partner (and in those fantasies in which I already see myself as a mum he is also the dad of our kids), but the kinky action usually doesn't happen between me and him. In my fantasies I often play with a group of fantasy friends, younger guys who like to be topped by me, a like-minded female friend with whom I top the guys together and who tops me from time to time and maybe also male friends whom I allow topping me.

And when I play with others? Well, it's quite simple when it comes to fun play or video scenes. In those cases I usually see the others involved for who they are and not as some kind of fantasy characters. In fun scenes with friends we usually don't use any fantasy scenarios anyway, so it's just us as people. When it comes to video clips, a part of my brain might get into character, but a part of me always remains aware that it is Ludwig, Pandora, Leia-Ann or whoever I am interacting with. That's quite easy for me with friends because we don't have a sexual relationship with each other, so it's easy for me to get into a fun or a formal setting.

It's more difficult with Ludwig and formal settings, though, especially when it's just the two of us, because our relationship isn't formal and it's difficult for me to imagine him as my commanding officer or whomever. I think that's because I am not a very good role-player. It becomes easier when others are involved as well or when we are making clips. Because then the setting is more formal because of the circumstances and that makes it much easier for me.

But how about when Ludwig and I are having sex? Well, that's the part that sometimes bothers me the most. Because then (at least when I am not in a toppy mood) I usually drift away into the rough sexual scenarios I am also sometimes fantasizing of. And then I don't see Ludwig as Ludwig any more. He becomes a fantasy character and I am mixing up the things that are really happening between the two of us with fantasy elements.

It is a bit different when I am topping. Then I am usually more myself and I usually see Ludwig more as himself and not as a fantasy character. Maybe that's because it takes less fantasy for me to get into the right mood for topping and to let myself fall? Maybe it's because my fantasies as a top fit more easily into an equal partnership than some of my fantasies as a bottom?

I guess especially the last part might explain why my kinky fantasies usually don't involve Ludwig and me as partners. The formal fantasies are more easily to imagine with people (often fantasy characters, as I already mentioned) with whom I don't have a sexual relationship in real life. They can be my friends, guides or protégés and our relationships can be rather light-hearted and fun without all the deep-going life questions and issues that come with a love relationship. And the rough, semi-consensual erotic fantasies are only sexy in role-play scenarios with fantasy characters and not in real life with my real, loving mate.

Still it gives me a bad conscience sometimes. Shouldn't I rather be fantasizing about spankings and sex with my partner than about scenes with fantasy characters? Is it okay to drift away into a fantasy world when having sex? Mind you, I don't think there is something morally wrong with this. Fantasies are only fantasies anyway and the mind is free. But still the topic is bothering me from time to time. Especially at times like this when I am not in a good place which also affects my relationship with Ludwig.

Personally, I see nothing wrong with involving other people in one's sexual fantasies than one's partner, or in addition to one's partner. I think it is something many people tend to do once in a while or even fairly regularly, including those who are in a very happy relationship. In my view, it does not mean that there is necessarily anything wrong with the relationship or that the person fantasizing wants to have a relationship with someone else. Sometimes, more distant friends and acquaintances get invoked in sexual fantasies precisely because they are more distant and have a more "formal" relationship with the person doing the fantasizing. Or there might be other valid reasons, without it meaning anything negative.

At the end of the day, I think it is a matter of degree. If all of someone's sexual fantasies involve other people and none involve the partner, then maybe there is indeed something wrong with the relationship. But if only some sexual fantasies are like that, and if some do feature the partner as a participant or as a background character, then I think this is quite normal, really.

I sympathise with the fact that, especially in BDSM fantasies, it can be difficult or even impossible to imagine the partner in a certain desired role as a top or as a bottom. Sometimes, a figure with whom one has a more formal relationship, or a figure who has an altogether different personality and vibe, "fits" into that fantasy role better. I have made this observation myself. Sometimes, I change the fantasy scenario in such a way and imagine special circumstances which might make the partner (in my case, Kaelah) fit into the desired top or bottom role after all. But sometimes, I might imagine other people instead of or in addition to her.

Surely the thing about fantasies is that thy are exactly that, fantasy. Over the years my Mistress and I have played out a considerable number of the scenarios I used to imagine and some that I never dreamed of but there remain some that we are unlikely ever to fulfill. Scenes involving public punishment, scenes with famous people or those involving a considerable number of participants are never going to happen but I can still dream of them and they may not involve her. I don't feel guilty about this as they are just dreams and in reality she is my perfect Mistress, cruel when necessary but considerate at other times.
Also like Kaelah I too fantasise about 18/19th century naval punishments. Sometimes I imagine that I am the cabin boy on a ship crewed by brutal female pirates, I'm sure you can imagine what thet get up to. There is something about that era and that setting that just lends itself to stories involving corporal punishment.

For me I think it depends on the fantasy. If I have something on my mind that is something I've done with my partner or could see us doing, he may be in the fantasy. But sometimes he is not. It's more of a general idea of the activity and no specific top in mind within it.

@ Ludwig:
I think you are absolutely right, it is a matter of degree. And of course there are several other aspects which show whether a love relationship is alright or whether there is a problem the partners should have a closer look at.

@ Simon:
Thank you very much for sharing your thoughts! And naval punishments are very intriguing indeed. :-)

@ Lea:
A very good point, it indeed depends on the fantasy!