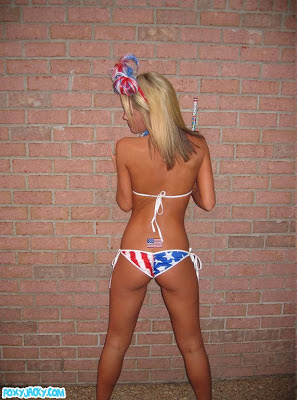 
Today is the Fourth of July. Most of our readers, being from the Anglo-Saxon world, undoubtedly know what that means: it is the day when the British celebrate that the Americans are no longer part of the British Empire!

As a German, I could decide to not give a toss. Our own national holiday is October 3rd, commemorating the anniversary of the German reunification in 1990. But, this is an English-language blog, Kaelah and I are both Anglophiles, and we have good friends in the spanking community across the Atlantic such as Indy and Mija, so I thought to myself: why not do a Fourth of July post this year! Hereby, without further ado, we would like to wish all our American spanko readers a happy holiday.

I distinguish between the American people and the American government, so I won't hold it against you that your NSA has apparently been spying on us quite extensively, monitoring around 500 million telephone calls, emails and text messages in Germany every month. Actually, as a historian and consummate cynic, I am not particularly surprised. This is precisely how powerful empires have operated since the dawn of civilization: trusting no one and snooping on everyone, including their allies. Especially when that ally is a lucrative target for industrial espionage like Germany. Hell, the NSA is probably constantly spying on you too, their own citizens, it just hasn't come out yet. In any case, a little Paranoia 101 never hurts.

The great thing about America, though, is that throughout its history, time and again, opposition forces have eventually appeared to address and correct such abuses of power. There are enough people who take the "land of the free" thing seriously, which impresses even a cynic like me. I am actually quite hopeful that, this time, in regards to the ever-growing intrusions of the secret agencies and security agencies, it will be the same. The world wide web as a new technology harbours enormous potential for connecting people, spreading knowledge and ideas, creating wealth and progress, but it also harbours enormous potential for totalitarian surveillance and creating the "totally transparent citizen". We should strive to maximize the former and minimize the latter.

But enough about that. Why have I, in five years of blogging, never written a Fourth of July post before? I remember thinking about it once or twice, but I always missed the date somehow. July was often a busy time in the history of Rohrstock-Palast. In my first year in 2008, I visited Niki Flynn as chronicled in The Wolfenstein Experiments, and shortly thereafter made my first visit to SM-Circus. In July 2009, Kaelah made her first official appearance as my mate in K-Day is coming! and Where No Man Has Spanked Before.  In 2012, we published a video with us and Leia Ann-Woods. In other years like 2011, July was just a busy month outside of the blog for us, which is why we only did three posts in July that year. Something always got in the way. But this year, finally, here is our very own Fourth of July post for the Yanks.

I have spent the past hour searching for a good picture with a "fourth of july spanking", a "stars and stripes spanking", "uncle sam spanking" or otherwise American-themed spanking, but did not find anything I was really happy with. The best I can offer is the picture above, which shows not a spanking but a spankable bottom. And just so you don't think that we only feature stereotypical fare of skinny chicks here, let me add, for the sake of gender equality, this shot of a hunk with a body that puts mine to shame (I found it on Roz's blog, so thanks for that).

Happy Forth of July, everyone! 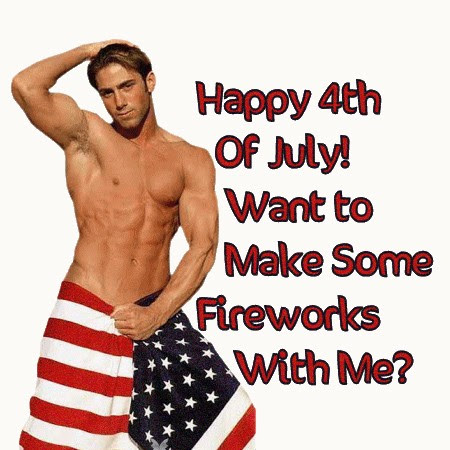 Happy Fourth of July to the American kinksters.

Concerning the unpleasant subject you mention in your post, i.e. the NSA activities: The only thing that mildly annoys me is that people are still surprised when these or other activities are exposed. I mean, come on, what did you expect? Did someone really think that the NSA cares about the privacy of German citizens or citizens of any other nation? I vividly remember how angry I got when I heard about the ECHELON project and how it is used for industrial espionage, and this was more than ten years ago.
http://en.wikipedia.org/wiki/ECHELON
With a group of friends, we included some sensitive words in every private and completely harmless e-mail, like drug, bomb, assassination etc., knowing that mails get scanned for words like these. It was our juvenile way of protest.

The question that matters, in my opinion, is: What consequences do you draw, for you personally? Do you change the way you use the internet or mails? There is nothing like total privacy or security, neither in the internet nor anywhere else. Of course, there are ways to protect you against some wannabe hackers or scammers, but I do not think only for the fraction of a second that I can protect my identity against some organization like the NSA.
As I do not communicate top-secret innovations by mail and do not have plans to blow someone or something up in the near future, I will probably just get dismissed as another pervert.

Thanks for the good wishes. I am not nearly concerned about what the NSA does as I am about what the IRS has been doing to conservative groups and the abandonment and lies to cover up Bengazi. The NSA deal is just a distraction.

The Bikini panties on this lady says it all. One of the best ways to celebrate the red, white and blue of the good old U.S.A., is to have a fire works, 'spanking good time'.

I hope all of our American readers had a great 4th of July! When it comes to the NSA I am with you, Ludwig, and with you, Fenris, in that I am more shocked about the ingenuousness of some Germans than about the fact that the NSA is spying on us. Like Fenris I am not scared as far as being kinky goes, though, because I am quite sure that the NSA doesn't have time and personnel to waste for observing harmless "perverts".