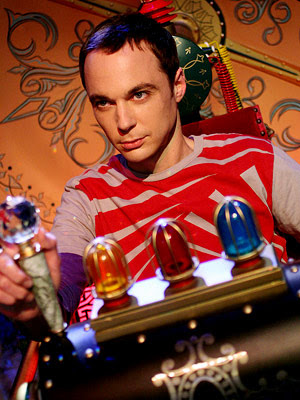 After the first kinky fantasies episode featuring Leroy Jethro Gibbs, I wanted to write the next instalment of this series for quite a while. A special event which has already been discussed on the Spanking Blog (many thanks for having been the first to make me aware of this!) and by Ana, Pandora and Erica finally motivated me for this post and also answered my question whom I should feature next. Obviously, there has been a spanking on The Big Bang Theory, one of my favourite TV series, and between two of the best characters involved. Since I am a trekkie, a Wil Wheaton fan (who makes recurring appearances at The Big Bang Theory) and a total geek, I guess I don't have to explain to you, why The Big Bang Theory appeals to me so much. Heck, I even have some friends who don't dare watch the series – because for them it simply is too real!

The series and the characters in a few sentences:

In case you have been living under a rock, here is a short introduction to the series. The Big Bang Theory is centered around four male geeky (or, except for Leonard, rather nerdy) scientists and their friends. Apart from being very proud of their respective works, the main characters are science-fiction (lots of Star Trek in this series!), fantasy, video game and comic fans. Sheldon Cooper (portrayed by Jim Parsons) is a theoretical physicist with an IQ of 187 and two doctor's degrees. But he lacks any understanding for social graces and irony. Amy Farrah Fowler (portrayed by Mayim Bialik), who becomes his girlfriend despite of Sheldon's disinterest for physical closeness and love, has a Ph.D. in neurobiology and loves social experiments. She enjoys social interaction more than Sheldon and also develops a desire for physical closeness with him. But she also shares many of Sheldon's character traits and therefore is a great match.

For me, Sheldon and Amy are a perfect example for an equal couple. Actually, it seems that Amy often is the one who is more active and takes control in their relationship in practise. You can see that in the following little excerpt which in my opinion exemplifies Amy's and Sheldon's respective behaviours and their relationship. But since Sheldon sets up a 31-page "Relationship Agreement" which Amy has to sign, I think one can say that he brings in his view as well. In my opinion, the two of them are predestined to be switches kink-wise.

Until now, the most kinky reference between Amy and Sheldon was the two playing doctor with Amy wearing a Star Trek uniform which took place in the aftermath of Amy's above shown experiment. To me, this already has almost the same appeal as a spanking. But now, there has been a real spanking scene featuring Amy on the receiving and Sheldon on the administering end. You can decide for yourself, though, who is in control here.

For me, Amy and Sheldon have a high kinky appeal as a couple because they are both strong and intelligent individuals and they share a relationship as equals. Their nerdy side makes them all the more attractive. I have to admit that Sheldon sometimes also awakens my motherly instincts, especially when he is ill and falls back into innocent child-like behaviour.

Actually, I could imagine Amy as well as Sheldon on both the receiving and the administering end of a light-hearted, affectionate spanking. The spanking scene as it was shown on the newest episode is one of the few spanking scenes in the mainstream media which really touched me in a positive sense and made me grin from ear to ear. I love the consensual background. I love the affection. I love that there is no "strong man teaches errant young lady a lesson" pathos, even though it is formally a discipline spanking because Amy pretended to be still sick and therefore in need of pampering when she wasn't (I don't see it as a real discipline spanking, anyway, which is most probably one reason why I enjoy it so much in the context of being between a couple). I love the fact that Amy is so obviously enjoying the spanking and probably seeing it as a wonderful social (and erotic) experiment. And I love the fact that Sheldon tries to be strict but doesn't like disciplining Amy, and that he has no real clue what is going on erotically. Well, enough said. Here is the excerpt for you to watch:

The combination of kink and geekdom is darn sexy. But then, this insight isn't new, is it?
Posted by Kaelah at 12:05 AM

I love this clip you found! I've seen others that are shorter, but this one captures all the elements. :-)

I haven't been this delighted with a spanking clip in a long time. Sheldon is just so deliciously clueless, and Amy is priceless.

Sheldon once received a spanking threat from his mother. That one didn't quite appeal to me as much, but I'm sure others enjoyed it.

Okay, you've convinced me. I'm going to have to watch this show!

Her voice on "Are you saying you want to spank me?" Possibly the best bit of acting I've ever seen.

Fantastic clip. I loved the way Amy reacted to the spanking.

I have a geek side to me and love Star Trek. My family put on Star Trek uniforms for a "Star Trek" video.

I'm not personally a fan of BBT but enjoyed the clip. They wrote it well!

I have never watched this show before, so, being totally unfamiliar with the characters and concept of the show, I didn't know what to expect. But all I can say is: Awesome.
Being kinky and geeky myself, it pushes the right buttons.
I like it how Amy is trying to get the most out of the situation and how she is luring Sheldon into "disciplining" her. For a ostensible vanilla production, they seem to have quite a good understanding of the kink.
The only thing that annoys me is the canned laughter.

We have never watched the show. The previews make us cringe. The clip was cute, but they made me feel uncomfortable. Guess I am biased against geeks. Perhaps I am a repressed geek. I will ask my daughter.

I didn't like this show until Star Trek came into play. Then Wil Wheaton came on...playing himself as a jerk! I was sold. I love it when famous people don't mind making fun of themselves.

I agree about the switching. The next time Sheldon acts spoiled, I'd love to see Amy threaten him. :)

Right after viewing the first part of the scene I quickly started writing a post to the Chross message board. I wrote about the charming dialogue but said there was no actual spanking. Nevertheless I stopped myself from posting to see just what was going to transpire after the commercial break. Much to the pleasure of my funny bone the scene continued after the commercial to its hilarious and satisfying conclusion. I revised my message and quickly posted in the hope that folks in other time zones would be able to catch the show. So I guess you could say I posted in "real time". I'm so glad to find out that the full clip is getting around and that so many spankos share my affection for TBBT.

So what's driving whiskey? And if Sheldon's brother was spanked we can guess that so was his beautiful twin sister (My mind works fast).

Someone has posted that Maylim is not attractive but personally I think she has totally blossomed! Keep in mind that she was playing sick and also she is going through a difficult patch in real life so give her a break.

When you say that sometimes Sheldon awakes your motherly instincts, I must agree, since I often feel the same: he is so innocent and far away from vicious thoughts that I find him adorable sometimes. And I really like the couple that Amy and him are building: Amy seems to have understood everything she needed to know about Sheldon. He loves to be cuddled and mothered, but he also needs to feel "superior" or "cleverer" than the others: when he spanks Amy and says "you're not supposed to enjoy that", he is, once again, in the position of the one who knows and tell, and indirectly, Amy put him in this position.
To say it shortly: they look like a future perfect spanking switch couple!

And I love this show since the beginning,by the way. But in the original version. The french version they did of TBBT is absolutely awful (making Sheldon not funny at all should be punished as a crime).

@ Erica:
It's great to have a good spanking scene on a mainstream show between two lovable characters, isn't it? I haven't seen the episode in which Sheldon is threatened with a spanking, yet. I guess I have to look it up though.

@ Pandora:
I'm glad you enjoyed the scenes and I very much hope you will like the whole show. It's definitely something for the geeks. :-)

@ Joey:
Yep, The Big Bang Theory is cool and Star Trek is cool as well. And a family video in Star Trek uniforms sounds great. I assume that it wasn't as cheesy and crazy as Ludwig's and my Star Trek-related spanking clip. My English was so bad and my acting was so wooden that day, but well, at least the idea was cool and there was spanking involved, so I guess it is okay. ;-)

@ Lea:
They absolutely did!

@ Fenris:
I'm glad you liked it! Being a geek, you should have fun with the whole show, too. But you are right, canned laughter can be annoying.

@ Our Bottoms Burn:
Well, maybe you are a suppressed geek? No matter whether you are a geek or not, you can rest assured that geeks are harmless. A bit strange, but harmless. Just like most spankos. ;-)

@ Ana:
Sheldon being threatened with a spanking or maybe even spanked would be cool! It would be interesting to see his reactions.

I absolutely agree with you, Mayim Bialik is beautiful. In my opinion she looks cute in her nerdy outfit in character and I think she is even more sexy in real life. Plus, a spanking scene isn't only sexy because the people involved look great. In my opinion the storyline and the characters who are represented play a very important role as well. But you will always find people who only look for stereotypical eye-candy and who also don't mind saying rude things about other people. I read the comment you talked about. Of course everyone is entitled to their personal opinions and preferences, but the comment could definitely have been less insulting.

@ Constance et Simon:
It's wonderful to have new commenters from France. Welcome!

I'm glad to hear that I am not the only one whose motherly feelings are sometimes awakened by Sheldon. When I told Ludwig what you wrote about the dynamic between Amy and Sheldon, he said he found it realistic. I did my very best to pretend not to know what he was talking about... ;-)

You are right, dubbed versions can be horrible sometimes! I think we are lucky in Germany in this case, because the German version of TBBT is quite good.