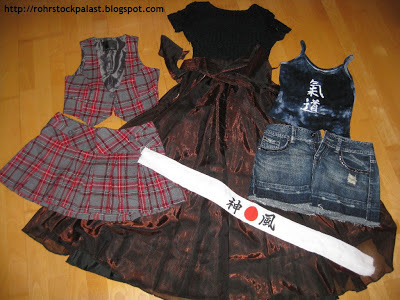 As I already wrote in my recent retrospective post, 2012 has been a very stressful and challenging year for Ludwig and me, and one without much kinky fun. But it was the most productive year so far blog-wise. Thank you all for having accompanied us on our journey!

Right now, there is a high level of uncertainty regarding important fields of our lives, and I'm not sure what 2013 will bring. The only thing I know is that there will be several major changes. Some things will come to on end, new adventures are about to begin.

Fitting to the changes in life, I am in the process of throwing out old things at home in order to have more space again (some of it to be used for new things, some of it just to be used to have more room to breathe). In my opinion, most people have a tendency to keep things which they don't need at all and which only occupy precious space in their homes. I am one of them, especially when it comes to things which I have been given by people I love. But I need a clean place and lots of free space as well, in order to feel happy and at home, so I have developed new strategies that allow me to let go of things I don't need. One which was recommended to me by a friend is taking photographs for the memories before giving away items which have a personal meaning.

In the last two days, Ludwig helped me to decide which clothes to give away. Now, compared to many other women, I don't buy lots of clothes (or shoes and the like). But I have a tendency to keep old clothes as long as they are still in pristine condition, even if I don't wear them often, for example because they don't fit me 100 per cent. I decided that this doesn't make any sense and that I should throw out these things. So, with Ludwig's help, I reduced the amount of clothes which I have by approximately 30 to 40 per cent in the last two days.

The funny thing was that we didn't have only two piles, as one might expect. We had three piles: One for clothes to keep, one for clothes to give away and one for clothes to use for kinky pictures and clips and give away afterwards. You can see some items which made it to the third pile in the picture on the top of this post. I don't possess lots of kinky clothes and sexy lingerie (I am always fascinated when some female fellow kinksters write about the number of sexy panties they possess), either, so everything that can be used for a picture story or one of our fun clips is welcome.

Speaking of fun clips: Ludwig and I had originally planned to film our LOL Day clip in the recent days. But then, Ludwig came up with an important insight. In 2012, almost the only kinky adventures we had were those that were directly linked to this blog, like testing new implements, making photo stories or filmclips. There hasn't been much private, spontaneous action, though, since all the stress has put me into cuddling mode and taken away my sex drive almost completely. But how can one be inspired to make good kinky clips if that's nearly all that is left of one's kinky adventures?

Consequently, Ludwig and I have decided to focus more on our private fun and play next year and only do things for the blog if we really feel inspired for them. I have no idea what this and all the other changes that are about to happen will mean in practice for the future of this blog. Maybe we will be blogging less frequently or maybe we will even be more inspired once we have had some time for ourselves. I can't tell you, yet. All I know is that for Ludwig and me 2013 is going to be a year full of big changes.

I wish you both the best of luck as you make significant changes in 2013.

I wish you both a very healthy and happy New Year.

Happy New Year to you both too and lots of happy spankings :)!
Emma x

Kaelah and Ludwig - My very best wishes to you both for the coming year. May it be less stressful than the last.

PS Sad to see that long dress on its way out. It gives me ideas.

I find that I need privacy and that sometimes the obligation to post can take the joy out of my writing. It is good to do things for yourself. :)

Did you get a NY spanking? :D

@ Joey:
Thank you very much! A happy and healthy New Year to you and yours as well!

@ Spankedhortic:
Very well said, Prefectdt! And you made me grin because you reminded me of the cave men on the Armstrong and Miller show. ;-)

I wish you a good year as well, despite of your mother's illness!

@ Peter8862:
A Happy New Year to you as well, dear Peter! And don't worry, the dress went on the third pile because we decided that it could still be used for some kinky fun and therefore shouldn't be thrown out! :-)

@ Ana:
I find it very amazing how many posts you write! But you are absolutely right, taking some time for oneself once in a while is very important.

I didn't get a special NY spanking, but I already got a spontaneous nice OTK spanking in 2013. :-)

I hope the changes in the new year are good ones and that you and Ludwig have a lot of quality time together!