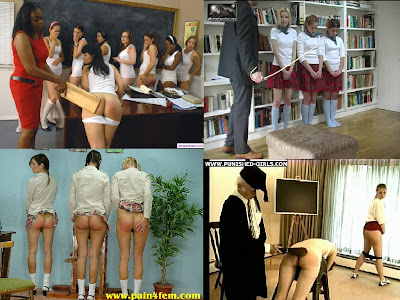 (Standard schoolgirl spanking fare from Girl Spanks Girl, Girls Boarding School, Pain4Fem and Punished Girls. By comparison, videos with male spankees or innovative spanking scenarios are hard to find.)
Some time ago Adele Haze wrote a very interesting post called Schoolgirl spanking: A favourite fantasy. In that post, she explained that she can't get enough of schoolgirl scenes, no matter how repetitive they might be. Adele also analysed why she likes schoolgirl scenes so much and why she can't get enough of them. And then she asked her readers about their opinions.

Funnily, Ludwig and I reacted the same way when we talked about Adele's post. Our shared opinion: “I wish I wouldn't have to see the same things again and again! I am getting tired of reading about and watching the same old stories over and over.”

Ludwig has written reviews of several schoolgirl spanking films and websites featuring schoolgirls. He always preferred the more creative and unusual schoolgirl storylines, but he liked the schoolgirl scenario as a classical spanking genre. Today, though, he is so fed up with schoolgirls that even imaginative variations on the topic, like Northern Spanking's Schoolgirls in Space, hardly manage to raise his interest.

I've made similar observations, but my issues go even further. Although I'm female and predominantly a bottom myself, I don't want to hear about x/F scenarios anymore. The reason: The internet is so full of x/F spanking stories, films and pictures that I simply sometimes can no longer stand it. I'm missing a certain balance, like Pandora so wonderfully described in her recent post Male spanking showcase. The result: What was once thrilling has become rather annoying and almost a turn-off.

I assume that all spankos have scenarios we can't get enough of. Today I don't want to ask you about those, though. What Ludwig and I would like to know instead is: Are there any aspects of kink which you once liked but can't stand anymore today? If yes, why has your interest in them diminished? Please feel free to share your thoughts in the comment section!
Posted by Kaelah at 9:52 PM

It's excess that turns me off. I like /F and the classic scenes such as schoolgirl in general... but I get bored and grumpy if it's all I can find. It doesn't mean there'll never be another scene like that which will appeal to me. But I'm more likely to enjoy anything in moderation. If I have access to a variety of scenes, each of those subgenres will appeal more.

That said, this saturation potential only exists within a niche - which is spanking. I never get tired of spanking, especially not if it's hard, forceful and in an edgy, interesting scenario. So I can see the point of view of people whose tastes are more specific than that. I imagine that only being interested in spanking must seem awfully narrow and boring to some people!

The things I'm very, very turned off by are things I've never really liked - such as scenes with sexist premises (actually I find "spanked wife" scenarios harder to take than I used to) or scenes which I find tasteless. At the moment I can't stomach "femdom" scenes - by which I mean the opposite to "male sub" scenes; F/M scenes which focus entirely on the woman to the extent that the man's face isn't shown and you don't know his name or anything about his character. The fantasy is the woman, often wearing some sort of fetishy latex outfit, making eyes at the camera and ignoring the bloke she's meant to be doing a scene with. So, so bored of that.

Personally I still like the school scenario, but it is getting a bit tired. For me what stimulates interest is interesting settings and costumes.
So, a scene played out in authentic 1930s school uniforms would be a bit of a thrill. Same script and actors done with standard-issue plaid minis is a bit of a bore.

The old sayings "Familiarity breeds contempt" and "Too much of a good thing" sprang to mind when reading this post.

Coming from a working class background the old scenarios of master/mistress thrashing their servants used to get my blood racing but I am just sick and tired of them now, especially in written literature. I can't help wondering why there are not more blue on blue working class play scenes around, especially in an historical context. Why should the working class spankee have to wait around for the aristocracy/middle classes to bring it on in a two adults scene?

School scenes will always be the core of my kink, I think, but I completely agree that they're overdone, and — as a consequence? — often done just not very well: no particular plot or chemistry between the actors, little attention to detail in location/clothing, etc. They're cranked out in volume, rather than with any love. It would make me happy to see a much better balance of /f and /m, also.

Not sure it's exactly something I used to like but don't any more, but I find I have very little patience these days for thinly-drawn, monolithic tops (mostly men, but not exclusively), who trot out the same hackneyed lines over and over again. The *best* stories, whether filmed or written, are those which involve characters with depths and insecurities, who relate to each other as individuals, rather than as role-markers. Really bored with the same old perfect and two-dimensional headmasters and guardians.

It's not that we are tired of schoolgirl scenes or f/m scenes, it's that we are not aware of ANY scenes that interest us that are offered by commercial sources. They all lack any sense of realism, the furniture props are tacky, the dialog is stunted, dress is casual to tacky, but most important to us is that humor and a sense of fun is not on the plate.

I would hire Erica Scott and Zelle to produce spanking scenes. They know how to have fun.

I am with her on that. I know that women are more verbal than man, but geesh, give the man a few lines. And he does not need to be a floor licking sub. Bacall and I are alpha all the way, but we still like to be paddled. How about something for us?

@ OldFashionedGirl:
You are right, different settings and costumes can already make a big difference!

@ Prefectdt:
That's an interesting observation! I have to admit that I never gave it much thought since I'm not so much into old scenarios (except for those set on a naval ship ;-) ), but you are right, there is usually at least one aristocrat involved...

@ PaulAtNorthGare:
I'm definitely with you about boring tops! For me the top is an important part of a scene, and if I find her or him boring / implausible / annoying, it is difficult for me to enjoy the scene as a whole.

What an interesting thread and comments. I find the genre fabulously exciting if done well and complete blank if it is done badly.

There is a cultural thing at play here - and I suspect that there is also an emotional link about "naughtiness" in our kink that reaches back to childhood. This may make the butterflies of expectation feel delicious in the same way as the cold air around our knees when weraing shorts or a skirt.

I suspect that the familiarity/shorthand of the power
exchange allows us not to be distracted by the context - inventing the scenario is effortless.

I suppose also that there is a natural feeling of safety and nurturing for those who enjoy this - the fact that there are actually rules and limits.

Muir Academy did a fabulous set of films (St Cath's College) featuring mixed classes. They are done with real wit, style and humour, although some may find the spanking a little "tame" if their tastes run to the severe.

Incorrect details and anachronisms in feature films jar with me.

@ Anonymous:
Thank you for sharing your thoughts on the subject. :-) Spanking films with mixed school classes? Now that sounds interesting!