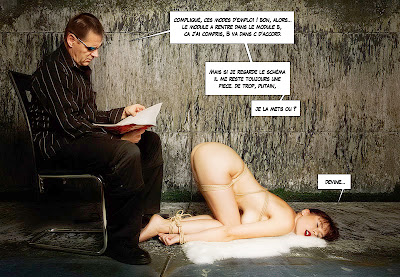 I am pleased to inform you that Ludwig's Rohrstock-Palast has been selected as "blog of the month" at Au Fil des Jours, a French spanking blog written by Stan/E. "Blog du mois" is a new feature which Stan/E. started in January this year, and Kaelah and I feel especially honoured to be the first recipients. To my knowledge, it is the first time that I am blog of the month anywhere, in any language (about damn time, too, after three years of writing!).
It is not the first time, however, that Au Fil des Jours has come to my attention. When Kaelah posted a photostory titled To Everything There Is A Season in March last year, showcasing some pictures we had made with her naked in the snow, I noticed through my traffic stats that our post was being eagerly discussed at this French blog. The nice thing about it was that Stan/E. did not simply re-post the pictures with a "Whoa, look at that gorgeous chick!" treatment, as others might have done. He took an interest in us as people, he recounted in detail Kaelah's comments about the making of the pictures, how she almost froze her toes off, and he was full of admiration for "la téméraire demoiselle", the "daring young lady". When Kaelah and I recently published our first spanking video, Stan/E. again featured it on his blog, labelling it "à voir absolument", a "must see".
Now that we are blog of the month, the accompanying text reads: "A German blog which I think is great... I was seduced by the tone, the details and the proposed recent link. Their video 'first spanking' is very pleasant, I hope you enjoy it as much as I did... Their blog for four hands (they take turns posting and the young woman has her own section, Kaelah's Corner, an excellent idea to have two bell sounds, the views of male and female) is in English, which they have mastered perfectly... They are sincere, very active, and you will be as intrigued as me by the sensuello-porno-erotico-spanko experiments of this young couple from the other side of the Rhine, including Ludwig's first steps as an actor in Czech and English productions..." Confirmation that the French do indeed possess a fine sense of taste.
Alright, enough flattery. But really, what pleases me most about this accolade is that it comes from an unexpected corner of the web. It has been my impression that the French spanking community is a bit more isolated than some others, that they largely stick to their own blogs and websites in their own language and don't mingle too much with les étrangers. Of course, this is true to some extent of the German spanking community as well. But I think it is more pronounced with the French, for whatever cultural reasons. So I am delighted about how this contact has come to be.
I am trying to scrape together what remains of my French so I can return the favour and leave a couple of comments on Stan/E.'s blog. Long ago, I learned French in school, but I was never as good in it as I was in English, and I have been out of practice ever since. My reading comprehension skills are much better than my writing. Kaelah never learned French at all, so she relies entirely on online translators, something the humanist scholar in me is extremely reluctant to do. But we will manage one way or the other. It would be great to learn more about les fessophiles (la fessée = spanking) and their particular kinks.
If you would like to take a look, Au Fil des Jours is an excellent starting point. Stan/E. presents a tastefully chosen selection of photographs and drawings from various sources, so even if you don't speak a single word of French, it should be of interest to you. Moreover, even though it is a picture-heavy blog, there is enough text to give an insight into the mind of the author, to provoke thoughts and to entertain. There is also a good link collection to other French spanking blogs.
In closing, I would like this post to be understood as an official encouragement for my French readers to delurk, if there are any. Over the years, I have exchanged spanko email correspondence with one or two Frenchmen whom I recall, a Franco-Canadian and one Belgian (who might have been Flemish or Wallonian, I don't know). But given how many native French speakers there are across the globe, you seem a bit under-represented. So, if you are around, don't be shy. Let us know about it.
Posted by Ludwig at 11:33 PM

Thank you so much for such a long post, I'll be back later, and will explain as well about "french spankers" and so on, time ton analyze !

You seems to perfectly read french. Your translation is quite ok.

Interesting and congratulation. You have been my blog of the month a few time already ;)

I have translated in french the contents. I hope many answers. Thans again, we'll continue, of course.

Thank you Stan/E. from me as well. I would also be glad to hear more from the French spanking community! As Ludwig mentioned, I haven't learnt any French. But even without an online translator the mixture of German, English and Latin enables me to understand at least a bit (for example from the comic above) and with the help of a translator and a dictionary I can understand nearly 100 per cent (for example I needed a dictionary in order to understand the pun of the comic). As long as the people don't mind that I have to answer in English, French comments and mails are always very welcome! :-)

@ Ursus:
Thanks! Hmm, maybe we should make you reader/commenter of the month one day... ;-)

@ Rich:
Yes, I noticed that, too! But usually it is quite easy to guess from the context what is really meant.

Hmm, it's been two months, and no other French readers have delurked. It seems like Stan/E. is the only one after all. Or maybe the others are just silent (I know from my statistics that I have a few people visiting from France).

Then again, neither did I make the comments on his blog which I said I would make. I need to brush up my French first!