When I wrote about the UK Meet and Greet trip Kaelah and I did a couple of weeks ago, someone asked if there are any pictures of Kaelah in school uniform. Well, we didn't take any while we were with The Spanking Writers. We sent Abel a photo during the preparations, trying to get the look right, but it was rather quickly done and never intended for posting. However, Kaelah was happy to take some pictures at home now and put them on the blog. Here is one, with best regards to Jony the Big Bad Wolf: 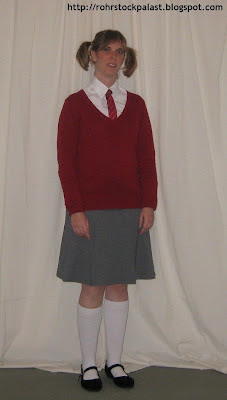 This is exactly the outfit she wore at Abel and Haron's party, even though she didn't have the silly-looking little girl pigtails there (I would like to state, for the record, that all participants in this photoshoot were over 21 years of age!). Kaelah told me that, if she is going to do a schoolgirl picture for the blog, she might as well "go all the way" - who knows, it could very well remain the first and last one. So she deliberately made it look as un-Klingon as possible. Isn't it alarming, how innocent she can appear when she disguises herself?

When Kaelah isn't dressing up in front of the mirror or writing her monthly column, she likes spending her time doing handworks. Something I'm totally useless at - my fine motor skills are developed enough to make me a reasonably good amateur musician, but I guess I just never had the patience for building small delicate things. So here's another premiere, the first handwork picture on this blog, courtesy of my girlfriend. Looking at it now, I remember that her patience wasn't perfect, either. A lot of cursing when the little figures made of chestnuts and matches [note from Kaelah: toothpicks!] kept falling over. But Kaelah eventually managed to make them stand long enough to take the photo. 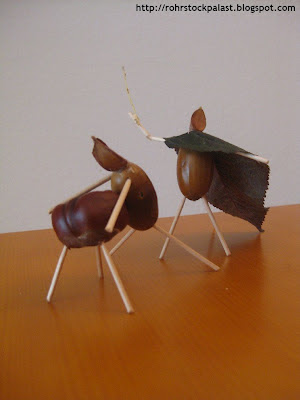 Doesn't it give you that cozy autumn feeling? I hope you've been using the past weeks well, when you still had plenty of chestnuts lying around in the local park. Handworks like these are a great way of "coming out" to your vanilla friends. Put some on the table when you are inviting the reverend and his wife over for tea! It will turn the conversation in a whole new direction.

Now that winter is closing in, though, it's time to settle down a bit. At least for us - the last four months have been pretty busy for Kaelah and me. First, there was the journey to Prague and the shoot with Lupus Pictures. Then, we had some major blogging work to do, the mystery of K-Day, Where No Man Has Spanked Before and the first edition of Kaelah's Corner. September was much the same, with the big behind-the-scenes report on Lupus and the Niki Flynn interview, for which Kaelah came up with roughly half the questions. Most recently, there was the UK trip. That one was purely a holiday and had no "work" attached to it, but it required a bit of organisation nonetheless, to meet all these kinky friends. When you factor in that Kaelah and I have a long-distance relationship, that we only see each other about every two weeks, and that we both have busy vanilla lives as well, you can imagine that we didn't have a whole lot of time to explore our still-new relationship in private. Not as much as we would have wished for, anyway.

So, we are both happy to take it easier now for the rest of the year and over the winter - no more travelling, no more kinky film shoots, no more parties for the time being. Just us! Don't worry, the blogging will continue unabated. But it will "settle down" a bit as well, as far as the subject matter is concerned. On my First Blogiversary back in January, I wrote that I would like to write more book reviews and philosophical ramblings. With everything that happened since then, I haven't been able to do either of the two - reading takes time, and so does rambling! Hopefully, I'll be able to do some now.

Most of all, I'm itching to finally write down the story of how Kaelah and I played for the first time - the "Klingon Rite of Span'qIng", her initiation into CP. I wanted to do that in August, then September, but it kept getting delayed by posts that were more urgent and more "contemporary" at the time. October was pretty stressful on the vanilla side of things. I'm confident, though, that we can finally give the tale of our first play the time and the detail it deserves in the coming weeks, before November is over. In the meantime, we tried to assuage those of you who desperately wanted to see cane stripes with the picture from the second edition of Kaelah's Corner, Abenteuerland. That one was pretty good, too, wasn't it?

Let me finish today's entry by wishing you all a happy Halloween this coming weekend. And don't forget to do some autumn-inspired tinkering before the snowy season sets in.
Posted by Ludwig at 11:36 PM

What a excellent cover-up. I would believe you are a well behaved young lady. :-)

The chestnuts are wonderful. I thought I'd be commenting on the adorable school picture -- but I'm way more excited about your beloved's nuts.

Hmm. Not sure that came out the way I intended. Or did it?

I seem to recall that said photo originally accompanied an email that asked something along the lines of whether Kaelah looked suitably authentic in her choice of uniform.

Such a nice photo!

@ Mija: Excited about my beloved's nuts, huh? I see a pattern emerging here. After the first edition of Kaelah's Corner, someone commented favourably on my beloved's tail!

@ Abel: Actually, it's not the same photo we sent you before we came over to the UK - that one was quite quickly done, just to give you an impression of the outfit, and we never intended it for publishing.

Kaelah only made this one a week or so ago. It does, however, show the exact same "school uniform" which she wore at the party, as you can see.

@ jony:
I played the role of the well-behaved little schoolgirl very successfully for 13 years. Almost all of my teachers and many of my classmates fell for it. And I even didn’t need a school uniform or pigtails… ;-)

@ Mija:
I’m glad you like the little chestnut figures! Taking that picture was much more difficult than taking the schoolgirl photo. Especially the top didn’t want to stand still – until I stuck another toothpick (which you can’t see on the picture, choosing the right angle was one of the challenges) into his … ahem … body … ;-)