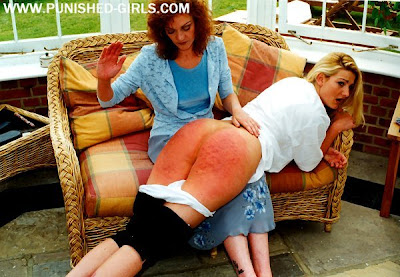 (Picture courtesy of Punished Girls, where you can download the movie)
Producer:
Calstar (released in 2000)

Entire Story In Fewer Words Than Are In This Sentence:
More reform school girls feel the lady's discipline

Victim Appeal:
For fear of stating the obvious, this is the sequel to Lady Vernon's Caning Heaven, and like the first part, it features the woman who is my all-time favourite Calstar top in the title role. How did I describe her in my review of part one? "A stately domme with wild red-brown curls and a cigarette-stained snarl of a voice." Well, yeah. Some flowery adjectives there (for the record, I don't know for a fact that she smokes!), but that pretty much sums it up. By the way, she also starred in Caning International, and I am not alone in being a fan - Lady Vernon, or whatever her scene name was, is the only Calstar top about whom I received inquiries from my readers (no, sorry, I don't know what she's doing these days, either).

Two blonde English lasses get a good thrashing here. One is addressed by the name of Brown in the movie, the other one by the name of Douglas. Both are quite pretty and, as Calstar titles go, they do a decent acting job. Douglas looks familiar somehow, she reminds me a bit of Dublin O'Brien, whom I've seen on Bars and Stripes and other British spanking sites. [Edit: However, Dublin wrote to me and let me know that it definitely isn't her!]

Gratuitous Sadism:
Brown and Douglas play two reform school girls, and the video opens with them being punished for having had boys in their room. So, the headmaster puts Brown over his knee. We already know him from the original Caning Heaven - he's the fair-haired chap familiar from many Calstar productions, like Discipline Within the Home (I love how he always plays headmasters or reformatory directors or whatever with that wild hairstyle of his, plus casual clothes and sports shoes!). It's only a very brief spanking scene, less than two minutes, with some hand swats on the clothes.

The girls don't take the punishment seriously. When they keep mocking the headmaster and Brown refuses to have her pants pulled down, he calls Lady Vernon from down the road. She impressed him so much with the job she did the other day, with the two students who had been stealing her apples, that he decides to enlist her "services" officially this time. "Yes, we would pay you, obviously!" he enthuses on the phone. "If they come back with the same results as those other two, I think we could have a regular contract with you."

He drives the two unruly students over to Lady Vernon's mansion. What follows are two typical California Star spanking sessions. First an OTK part (first over the pants, then over the knickers, then on the bare), followed by the spankee bending over a sofa for a dose of the leather (rubber?) paddle, followed by a dose with another, thinner paddle (the girl is fully naked by this point), followed by a final caning. Brown is the first to get it, and then Douglas receives the exact same treatment. Needless to say, the two are very meek and contrite by the end - looks like the headmaster enlisted the right woman. Actually, they were meek and contrite all throughout the session...

These are two of the better CP sessions I've seen from Calstar, in terms of action as well as atmosphere. The room where everything takes place, with its big windows and a view of the garden, makes for a fine-looking location. There is a quiet, but intense chemistry between the players. And the spankings are pretty hard, as usual from this domme. She really likes her job. Calstar shows the action from different perspectives, as they always do, so it isn't easy to say how many individual strokes each spankee gets during the caning at the end. My best estimate is that Brown takes around 15 strokes and Douglas around 12 (however, the latter caning is the harder of the two). Both are left with visibly reddened bottoms and some very nice welts.

Best Reactions:
I like the reactions of the spankees a lot, and they are in fact a big part of why this is one of my favourite Calstar videos. Both girls are very quiet and very restrained, but their gasps, painful grimaces and buckling knees show that they are feeling the beatings. Brown lets out a few suppressed moans during her caning - when you elicit a noise from a girl like that, it's very satisfying for the top, because you know that you worked hard for it. Some nice moments there. At the end of the day, though, I would have to give the nod to Douglas (Dublin?). She is even more quiet than her colleague, but the look of wide-eyed, open-mouthed surprise on her face after one of Lady Vernon's cane strokes is priceless. She might as well have said it aloud: "Oh, gosh! That one really hurt!"

Best Line:
In the opening scene, the headmaster storms into the girls' room and exclaims: "We just saw two men shinnying down your drainpipe here!" That was kind of funny.

Nice Psychological Touch:
I liked the idea of a reform school headmaster enlisting the help of a stern lady from the neighbourhood to discipline the girls - totally goofy, of course, but interesting somehow. And I like the title of these two films in general, "Caning Heaven". You could say that it sort of on the same level as "Caning Palace". Mind you, the name of my blog sounds a lot more dorky in English than it does in German...
How Good Is It Really?
The two "Lady Vernon's Caning Heaven films" are among my favourite California Star titles, and this is the better of the two. As opposed to the first part, where one of the spankees quit early, Lady Vernon does two full CP sessions here, and they are both very good. The location is nice, the two girls are sexy, and there is a palpable atmosphere and intensity to everything. I like this one a lot.
What You Learned:
I tried to find out a bit more about "Lady Vernon" after watching this video again and reviewing it. I know she has been in other CP films as a bottom, at Sting in the Tail, for instance. I always like to see a top who can not only dish out a thrashing, but take one as well! Now I learn that she apparently had a vanilla porn career on the side: the British Girls Adult Film Database lists her under the name Stephanie. I wonder if I should watch "The Continuing Immoral Adventures of Captain Cock and Rodney Rude". That sounds like an interesting title. Or perhaps "European Meat Market 1: London Broil".
Posted by Ludwig at 6:50 PM

Hi, which movies have you seen Lady Vernon bottom in....btw i've been out with her for a drink before she moved house...intersting lady indeed and still dabbles from time to time lol

@ Anonymous: You've been out for a drink with Lady Vernon? Good for you. I would love to meet her and chat with her myself. I've been a fan for a long time, and the California Star videos with her as a top are among my favourite British spanking videos. She has an understated, but at the same time authoritative and elegant style which I like a lot. And she is a very good caner.

As mentioned in the review, she has appeared as a bottom in some videos by Sting in the Tail. Her name there is Annabel. "An Extra Gym Lesson" and "Young Offender - Part 1" are two videos I know. She has also bottomed (and topped) in a Strictly English video titled "Plaything".

I've seen her as a bottom in a few more videos, but couldn't locate them in a quick search through my collection (a long search would take more time than I have right now, sorry).