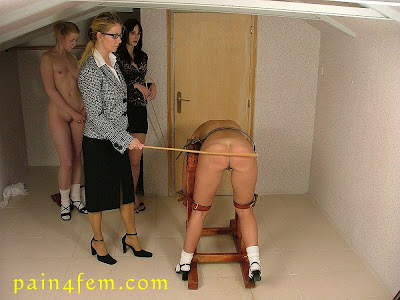 Producer:
Pain4Fem (released in 2004)
Entire Story In Fewer Words Than Are In This Sentence:
An object lesson for pirates. Yarrr!
Victim Appeal:
The spring of 2004 was an interesting time for CP movie enthusiasts, with two new producers appearing on the scene who quickly attracted attention: Mood Pictures from Hungary and Pain4Fem from Slovakia. Both were from places that hadn't really been "on the map" before as far as spanking videos are concerned, both featured plenty of model "eye candy" in combination with some proper beatings, and both, predictably, became immensely commercially successful. I already reviewed the first movie by Mood, Ancient Regime. Today I'm reviewing Pain4Fem's debut, "Illegal Download".

Two blonde girls get thrashed in this one, Nicol and Kelly. I don't know anything about Nicol, except that she later did one more film with P4F, "The Thieves". The voluptuous Kelly (Norton) aka Katerina, of course, became a company mainstay and one their most well-known "faces" (or bottoms, if you prefer).

Gratuitous Sadism:
The two of them play schoolgirls who have downloaded illegally shared music files from the internet, using the school's computer. They are found out and the headmistress informs them that this is not only against school rules, but also an offense (actually, in the real world, downloading such files isn't usually treated as an offense, although uploading is). She has no choice but to inform the police and expel them from the school. The girls plead for mercy, but they are sent to their room.

A teacher argues that "destroying the girls' whole lives" because of such a download would be too harsh (hey, I concur!). The headmistress says that, in the old days, it was easier - the girls would simply have been caned, and that would have been the end of the matter. But today, corporal punishment is forbidden. The teacher responds that, in all probability, the girls would prefer such a punishment over being expelled from the school. Well, you can see where this is going...

A deal is made that, if the pupils voluntarily accept a dose of corporal punishment, there will be no further consequences. Since this is a fantasy movie, they agree! Not only that, it also turns out that what the headmistress has in mind is a full multi-implement "session", including an OTK beginning, a strapping (she refers to the instrument as a "whip", but it's a strap, really), and a caning. Where can I apply for a teaching post at this school? I could do history and German.

Anyway, the whole thing takes place up in the school's attic, because that is where they stored all the CP-related stuff after it was outlawed, you see. The headmistress bends the girls over her knee for a hand spanking, first on the panties, then on the bare, before they take turns tied to a wooden bench while the strap and the cane make an impact. By the end, they have lost their school uniforms (the skirts were ridiculously short, anyway) and are both stark naked. The action is somewhere between light and medium-level and leaves some visible stripes. There are some repetitions from different camera angles, but my estimate is that Nicol and Kelly get around 25 individual cane strokes each, give or take a few.

Best Reactions:
The action is considerably lighter than in some of Pain4Fem's later efforts, but both (vanilla) models react in a rather vocal and, I believe, genuine way. I liked Kelly's shrieks and sobs better among the two.

Best Line:
When the headmistress confronts the pupils about the music downloads, they start to defend themselves: "But a thousand others also do this...!" She cuts them off: "What others do is not of interest to me."

Good point against a lame excuse, isn't it?

Nice Psychological Touch:
Well, I enjoyed the whole "semi-consensual" scenario, "you can choose CP or we expel you from the school". You know I have a fondness for that. Also, it was kind of amusing that Pain4Fem would choose illegal filesharing as the subject for their first release. Especially because they became one of the most active and successful spanking video producers in fighting piracy. Oh, and I liked how the headmistress and the teacher take a trip to the attic to "check if everything is still there" (caning bench, et cetera!) before the action starts. Silly, but a nice buildup nonetheless.
How Good Is It Really?
The summary is simple on this one. If you are not a P4F fan, there really is no reason to see it, because it is a first attempt and not even one of their more polished films. If you are a fan, however, then you will definitely want to see it. For nostalgic reasons, and because many of the company's trademarks are already there: a picturesque little outdoor intro, melodramatic music, long (sometimes overlong) preparation and buildup scenes, Kelly Norton...

What You Learned:
When I watched "Illegal Download" again for the review, I noticed that Peter Schober, the Bratislava-based Austrian who runs Pain4Fem, is not in it - not even in a cameo role. I had remembered it differently, probably because the guy is omnipresent in pretty much everything else they do! "Interesting", I thought, and looked through their entire catalogue (just the previews on their site, not my video collection). Indeed, from what I can tell on a quick survey, there are only two movies among their 30 plus so far in which Peter doesn't appear - this one and "Pocket Money". So if you are a total F/F purist for some reason, that might be another incentive to check it out.
Posted by Ludwig at 11:36 AM

That restraining bench!!
I've always been fascinated by the presence of that rather formal wooden aparatus that someone has so carefully designed and built for the sole purpose of restraining and caning schoolgirls.
It's found in Pain4fem and Lupus films. Is it possible that these devices actually existed and were used in Eastern European schools in recent history? Or are they just the figment of someone's imagination.
Any historians or former pupils out there?
-Greg

Well, I'm not an expert on the history of corporal punishment. At least not as much as some people think, or as much as I probably ought to be! But to my knowledge, benches like that weren't really used in schools - neither in Eastern Europe nor anywhere else. If they were used in schools at all, it wasn't common, and I can't think of a single case I heard about.

"Punishment benches" and similar restraining devices, where people would actually be tied up, were much more at home in judicial CP, in prisons, in the military.

So, no, when you see them in schoolgirl scenarios in the spanking videos of today, it isn't really realistic. And 30, 40 or 50 stroke canings, administered while the girl is fully nude, aren't realistic, either!

".. Is it possible that these devices actually existed and were used in Eastern European schools in recent history?.."

Unfortunately no. This bench is my own design and was originaly created for the "From The Direcrors study" serie. After few movies slightly adjusted with cooperation of Pavel Stastny (was a bit low).
After some time, I found similar benches in many other production movies :-)

Ludwig, these reviews are nice and all, but I'm really looking forward to your "exit interview" with Nikki!

Thomas: Yes, one might say that the bench Pain4Fem use looks a *little bit* like yours, doesn't it? *grins* But you know the saying: imitation is the sincerest form of flattery.

Karl Friedrich: First off, I need to finish the Lupus behind-the-scenes report. I was planning to post it on Tuesday or Wednesday already, but something came up and I'm running a bit late (it always seems to happen when I name an exact posting date in advance, so maybe I should just refrain from doing that in the future!).

You'll read Niki Flynn's last interview (before she rode off into the sunset) in about a week.

Adele Haze has a voluptous bare bottom, and believe me if I would love to cane this naughty woman by giving her 25 strokes. I also love the work of the 'Lupus' group, of spanking movie, they make them very realistic. I especially like 'The Peacock Lady', and 'Housemaster Group' series. The 'caning scenes', are pure perfection.