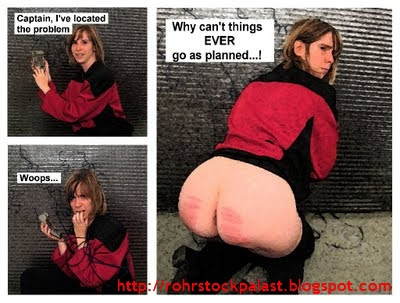 This blog post is about my fantasies: how it all started in my childhood and how things changed and developed as an adult and in my relationship with Ludwig. Since this is a very complex issue, I decided to split the post into two parts. Part one will be about my personal fantasies and part two about current restrictions, hard limits and the question of how to deal with them.

I think there is nothing more personal in our lives than the dreams and fantasies we have. And I’m quite sure that most people don’t share their most intimate fantasies with anyone, not even with their partners. Telling somebody about those special pictures in our minds makes us vulnerable. On the other hand, acting out those fantasies with someone one trusts or even loves can be the greatest adventure one might explore in a lifetime. It can lead us to a beautiful new world, the “adventureland”.

Personally, I’m very glad that I’m still able to immerse myself in dreams and artificial worlds like I did in my childhood. In my opinion life isn’t worth living any more once one looses this ability. This is beautifully illustrated in an adventure of the cartoon figure Tabaluga

her dark, aggressive side 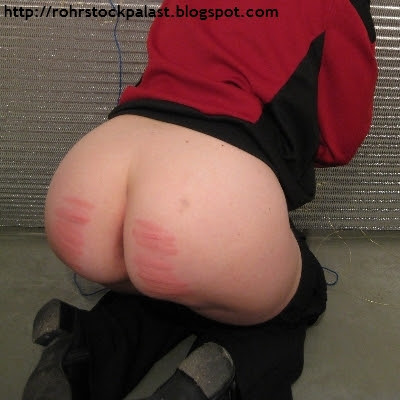 (Note from Ludwig: since Kaelah took a fairly hard 12 stroke caning just for the little "comic strip" at the beginning of this post, I thought we should also show you a picture of the marks before we applied the comic book effects. So, in case anyone was wondering if the red stripes are painted on or real, they are of course real. Aren't they gorgeous?)

Wow!~ All hail Kaelah!
You weren't kiddin'
Those stripes are real.

Great to hear your fantasies too.
Any "interpreters of dreams" out there to analyse them?

I'm so there on the "Caring Guidance" fantasies, particularly the M/m part. :)

Ohhh, great! I could not even describe my dreams and fantasies as accurate as you in German and you do it in English... Do I really have to wait another month to read more? *sigh*

Very nice stripes on a gorgeous bottom that we all want to see MORE of!

Congratulations Kaelah on a sensitive and beautifully written blog. It rings many bells but deserves a second reading before one dares to comment.

Meantime - thank you and roll on Part Two !

Love those cane stripes Kaelah, from someone that enjoys a naughty woman undergoing '12 of the best strokes of a swishy painfull caning on their bare bottom.

Thank you all for the comments. I’m glad you liked the pictures and the post!

@ Adele:
I would be interested how many of us girls are into M/m-scenes?! Raise your hands, anyone? Adele, do you think we might be able to persuade Pavel Stastny to do one more Lupus film? That might be the only chance to get Ludwig to switch for an M/m-scene! ;-) And I’m sure that it would be a very delicious one…

@ urs0us:
I’m afraid, you’re going to have to wait about one month for part two of this post. But I’m quite sure that the post about Ludwig’s and my first play and another little post from me accompanying this account will be up first. I hope that’ll be enough fodder for the meantime… :-)

@ Peter:
I’m so looking forward to reading your thoughts on the topic! I really hoped that more readers would write something about their fantasies and experiences - and I’m very happy that you’re going to take the time to write down your ideas!

Somehow, I missed this post. I must have decided to wait until I had more time, but then it was no longer on my blog reader! In my own defense, I was recovering from a concussion at the time (still am, a bit) and my cognitive skills were not up to par.

This is a lovely post, very brave and revealing. I'll have to think a bit more about the points you've raised. For now, I'll just join the M/m fanclub. (Shocked, of course, to see Adele there, lol). There's something about the bravery of the boy that's so compelling. Of course, there's also a certain degree of realism, as boys were (are, I guess) beaten much more frequently than girls.

Strangely enough, although I always place myself in the role of the spankee in M/m scenes, RL or fiction, I don't think I've ever fantasized about taking a spanking as a boy. Not even during my childhood when I used to daydream about being a professional baseball star (obligate male fantasy).

OK, that's enough for now. Thanks again for a very interesting post.

Any chick that would dress up as a fan in a Star Trek Uni and take a caning? WOW! LuckyLudwig!! You got a real keeper there buddy!

Jealous Fan in the US...

@ Anonymous:
If you really want a girl who takes a caning dressed in a Star Trek uniform, maybe you should try to go to one of the Star Trek conventions and find the kinky girl of your dreams?! Just one piece of advice: In case you really want to make a closer contact, avoiding the word “chick” in your conversation might help… ;-)