It looks like the coverage of the "great and exciting news" I announced in my last (non-review) post will have to wait just a little bit longer. I still have plenty of work to do in my "other life", and moreover, I want to make sure that the upcoming blog articles about this wondrous, important subject are as high-quality as possible. The same goes for the behind-the-scenes report I'm writing about Lupus Pictures, which will now probably go live in late July, rather than early July, as originally planned. Ah well. Perhaps I should just refrain from announcing dates (even unspecific ones) in the future, and stick to the old software programming motto: "It will be released soon."

Anyway, in the meantime, I'm throwing some smaller, but nonetheless amusing news at you. They don't have anything to do with me personally. Actually, they don't have anything to do with spanking or corporal punishment at all. Maybe, with a lot of good will, they could be misconstrued as being somehow related to the general phenomenon of "fetishism". In any case, this little gem of a story was simply too hilarious to pass up, so I felt I had to share it with you. It's a news item I stumbled upon in the Süddeutsche Zeitung ("South German Newspaper"), June 12th edition, page nine, the "panorama" section. I usually only read the international headline news, the politics section, the culture and science sections thoroughly, but I couldn't help noticing this article titled "Fox, you stole the shoe".

Apparently, the small rural town of Föhren (population 2,690) in the Rhineland-Palatinate area of Germany had been plagued by a mysterious shoe thief over the last year. The shoes always disappeared at night, from doorsteps, gardens and back porches. Neither the townsfolk nor the police had a clue what was going on until a forestry worker on a routine job solved the case: he discovered a fox's den in the nearby woods, and with it the stolen goods - in and around the lair, the fox had amassed no less than 120 shoes, a veritable footwear collection. The Süddeutsche Zeitung article ended with the words: "Why the fox - who remains at large - is so utterly obsessed with shoes, no one knows."

It has been theorised that the vixen fetched them as toys for her cubs. Or that, perhaps, she simply enjoys collecting shoes - why should female foxes be all that different from female humans? Gender stereotypes aside, I'd wager a bet that there is some kind of kinky fetishism involved here! Wouldn't you?

In a fitting epilogue to the story, the local count (they still have a count - it really must be an isolated town!) had the retrieved goods laid out in his palace so that the townsfolk could come and take their shoes back. I mean, it's brilliant, isn't it? Picture the good people of Föhren, sifting through dozens of old hiking shoes, flip-flops, boots and slippers. In the count's palace! Even David Lynch would be hard pressed to come up with a surreal, comic scene like this one.

I've written about a fair number of nameless vixens on this blog, particularly in my movie reviews. But few were as unusual as this one. Perhaps we really should re-write the famous German children's song "Fox, you stole the goose" in her honour: 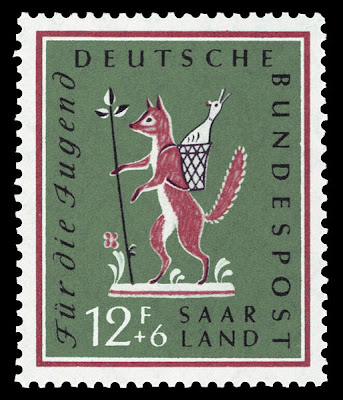 Does the fox know Lucy McClean?

It's possible, I suppose. At first sight, given the location and the remoteness of the German town, it might seem unlikely that there is a "northern connection" all the way to Scotland. But on the other hand, when you consider how bizarre this case already is, I don't think you can rule anything out!

P.S. By the way, it's "McLean", not "McClean". I'm afraid I'll have to inform Lucy of your inexcusable faux pas so she can put you on the list for a good caning when you set foot in the UK again...

Damn, I was afraid I had the spelling wrong! Couldn't be bothered to look it up, though. That might be the only fair punishment I'd manage to pick up in England...

OMG I soooo love this stamp!!!!