You have about three days left to post your K-day theories. The winner will get a free one-month membership to Bars and Stripes, the definitive "women in prison" spanking site. And while we're on the subject of competitions: do you remember this one from December last year? Since nobody ever found the correct answer (or posted any answer at all, for that matter), it is still open as far as I'm concerned. So, if any of you severity freaks out there want a shot at winning a free Mood Pictures video of your choice, all you have to do is watch their CP epic Sweet Revenge and spot the one specific Kill Bill reference it contains.

I was reminded of the whole thing because I recently watched "Kill Bill" again, both Vol. 1 and Vol. 2. I liked it well enough the first time I saw it, years ago, and I like it a lot more now. On a second or third viewing, it's easier to look past the relentless pace and bombastic fight scenes. You begin to realise what an excellent, masterful film this actually is.

I know it's still fashionable in some circles to dismiss Quentin Tarantino as a hack, a glorified video store clerk. Indeed, he seems to intentionally invite that kind of reaction - even more than his previous films, "Kill Bill" combined all the ingredients which teenage fanboys worship and highbrow critics sneer at. Being Tarantino's distillation of the countless martial arts flicks and spaghetti westerns he grew up with, this movie contains:

9. A stereotypical, elderly martial arts master spouting lines like: "It's the wood that should fear your hand, not the other way around!"

But the impressive part is: it all works somehow! As a matter of fact, it works stunningly well. Underneath all the juvenile coolness and the endless pop culture references lies a brilliantly crafted film, a virtuoso display of skill and technique, and a heartfelt tribute to cinema. While it's easy to ridicule the pulp movies Tarantino pays homage to, the sincerity of his love for them is undeniable, as is his raw genius as a director. The result is slick and self-indulgent like the man himself, but it isn't shallow - as an exercise in "pure" filmmaking and stylistic syncretism, this is fabulously interesting stuff, I think. It only helps that the characters are cardboard and that the story is basically a comic book. Given the lack of substance, the style is all the more eye-catching.

Some people object to the "aestheticisation of violence" in Tarantino's film. I'm into spanking and CP videos of the worst sadistic kind, so I predictably don't have a problem with that. The violence in "Kill Bill" is so cartoonish and over-the-top, anyway, that I find it hard to see any connections to the real world (I also find it hard to see any connections between Mood's nonsensical "gorgeous, 20-year-old girls in prison" settings and the real horrors of Abu Ghraib!).

By the way, It's interesting to note that most of the complaints people have about Tarantino are literally the same ones they had about Sergio Leone 40 years ago: "no depth", "no story", "too much violence", "too much killing", "steals from other filmmakers"... Today, of course, Leone is commonly recognised as one of the all-time great directors. Will be interesting to see how Quentin holds up in this regard!

My own martial arts movie phase ended when I was about fifteen, but I still have enough of the adolescent male fanboy in me to enjoy a guilty pleasure like this ("male fanboy" is not a tautology, because there are female fanboys, too). As well as that, "Kill Bill" contains enough kink to keep both my past and present selves happy. I mean, how can you dislike a film where the very first shot is a facial closeup of a sweaty, bloodied, shaking damsel in distress and the first spoken line (from her tormentor) is: "Do you find me sadistic?"

That bloodied young woman, of course, turns out to be the main character of the film: "The Bride", played by the adorable Uma Thurman. Arguably the role of her life. Over the course of the next four hours, The Bride is battered and brutalised in every conceivable manner: beaten with fists, slashed with swords, bludgeoned with a mace, cut by glass shards, kicked around, stunned with a shotgun round, sexually abused while comatose, spat on, injected with tranquiliser, shot in the head, buried alive... Actually, it's hard to think of any other female character in a mainstream movie of recent years who gets abused so much. Oh, and that live burial scene is a claustrophobic masterpiece.

But in my view, people who scream "misogyny" and "degradation" are clueless. They have it completely wrong. The truth, I think, is very much the opposite. The Bride is enobled by her ordeal, by the trials and tribulations. Rather than being destroyed by them, the heroine - the superheroine - only emerges stronger at the end, true to Nietzsche's famous dictum. Stronger and victorious. In short, this is exactly the kind of kink I like!

If you're looking for something more traditionally CP-related, there is a hint of a glimpse of barely a "spanking" in the House of the Blue Leaves scene. But even though it has Uma Thurman in an F/M position, it is rather forgettable. No, my favourite scene of the film(s) is probably the walk across the desert. "Sunny Road to Salina" is an absolutely haunting piece of music, isn't it? 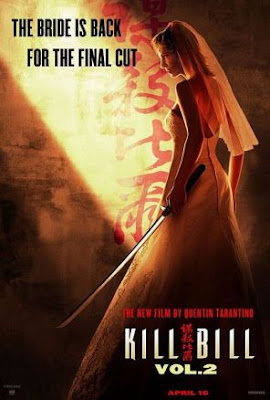 As a further postscript it's interesting to see that Bill, or rather the man who played him in the film, did meet an untimely death under mysterious circumstances. And you've got to wonder what role his participation in this film played in that. Was there a "sorcerer of the apocalypse" effect at work, as they suggest over on the Twilight Language blog: http://copycateffect.blogspot.com/2009/06/carradine3.html

Here's that link again, in what should be a live form: http://copycateffect.blogspot.com/2009/06/carradine3.html

Karl Friedrich: Hmm, quite a coincidence, that "postscript"... I wasn't aware that David Carradine had died only a short while ago, so my recent re-watching of "Kill Bill" and my post here had nothing to do with that. I only learned about it from your comment, and just read one or two news stories now.

At the time of this writing, it seems unclear whether Mr. Carradine's death was due to an accident, suicide or somehing more sinister. I'm not going to join the legion of movie bloggers who fruitlessly speculate about it, though. I'm not interested in that, and even if I were, this is a kinky blog rather than a mainstream movie blog, so it isn't really the proper place. Suffice to say, it's sad that he's gone. His mad genius will be missed.

As a general observation, one might say that it seems impossible for a famous actor or musician to die these days without conspiracy theories and rumours of foul play arising immediately. It's all welcome fodder for the shallow, sensationalist media hacks and the shallow, sensationalist masses they exploit. As if we didn't have any real problems in this world, and real mysteries to unravel...

Ludwig, I agree it's often hard to unravel the signal from the noise these days.

Still, look at real-life S&M as a spectrum. On the mild end we've got good natured teasing. On the other we've got -- and perhaps this is just my theory -- trauma-based mind control and ritual human sacrifice.

The thesis of blogs like Twilight Language and Pseudo-Occult Media is that many celebrities are heavily mind-controlled in somewhat the same "non-consensual" and unambiguously evil way that's described in Cisco Wheeler's book, "The Illuminati Formula Used to Create an Undetectable Total Mind Controlled Slave".

Of course maybe you like to keep your horror fictional. And that's fine if you do. But if you're willing to look down the rabbit hole some day, you may find it stranger than fiction.

BTW, here's an online copy of that book: http://www.theforbiddenknowledge.com/hardtruth/illuminati_formula_mind_control.htm

"Still, look at real-life S&M as a spectrum. On the mild end we've got good natured teasing. On the other we've got -- and perhaps this is just my theory -- trauma-based mind control and ritual human sacrifice."

I suppose it is just your theory, then. Are you seriously claiming that "trauma based mind control" and "ritual human sacrifice" are common, or even occasional, practices in S&M, as real activities rather than subjects of role-play? If so, you must be part of a very different scene than I am...

"The thesis of blogs like Twilight Language and Pseudo-Occult Media is that many celebrities are heavily mind-controlled in somewhat the same 'non-consensual' and unambiguously evil way that's described in Cisco Wheeler's book, 'The Illuminati Formula Used to Create an Undetectable Total Mind Controlled Slave'."

Another "hard truths" book promoting the idea that there is a global conspiracy involving the Illuminati, the Committe of 300, the Grand Druid Council and the Rothschild banking family? Yawn. I don't know about you, but I can never tell whether these people are serious, believing conspiracy theorists (serious lunatics, in other words), or just pranksters who parody believing conspiracy theorists. Maybe they aren't quite sure themselves! After all, you never know who is being mind-controlled and who isn't...

Conspiracy theories can be a lot of fun as fictions - I'm a fan of "The X-Files", of "The Da Vinci Code" and "Foucault's Pendulum". They are also a great vehicle, I suppose, for pseudo-scholars to sell books and host radio talk shows. But I don't believe in them, and I think most of my readers don't believe in them, either. If you do, that is your prerogative.

Personally, I find that the world holds enough intriguing mysteries and enough real, unimaginable horrors as it is, without resorting to the rather far-fetched belief that everything is controlled by a sinister, globe-spanning, age-old cabal.

As you say, Ludwig, it's hard to know what's real and what's disinformation in the bewildering world of conspiracy theory.

Still, in that world, there are folks who do assert the reality of trauma based mind control and human sacrifice. I realize it's a stretch to call it S&M but I do believe there's a qualitative relationship.

In S&M we're "playing" with forces that are quite real in the wider world. It's no doubt another of my theories, but I like to think that by playing with them in this way, we can somehow humanize these memes, forging swords into plowshares, or squeezing lemons into lemonade.

Kill Bill is pure art.
I viewed again parts of it, and also all of Sweet Revenge", but I couldnt find that referene! Not a dress, not a line, not the gun.
Some theme of music then?
When will you tell?

I read this whole blog thinking the "Bruce" in the title stood for Bruce Campbell.

Then the best place to look must be in the background music at the beginning - conversation with the mafioso.
But I dont have KIll Bill in the house...