(This is part two of my behind-the-scenes report on SM-Circus. You can read the first part here.) 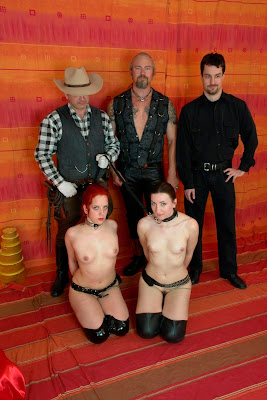 Pony play was next on the list of exercises that would transform Miss Blake into a well-trained pet girl. Pandora told me afterwards that she had prepared for this part in particular, paying close attention to what Niki Flynn and Amelia-Jane Rutherford had reported about their experiences the year before. It showed - she high-stepped over the obstacle course forwards and backwards as if she had been doing this all her life. There wasn't a single mistake, even though she was blindfolded most of the time. Twenty minutes and a change of recording tapes later, Herr Direktor Sands had to ask Pandora to "get angry" and stomp on one of the bars on purpose, so he could insert a little bit of punishment into the clip.

I recommend you take a look at Pandora's own account of the shoot, which makes for great reading as usual. She titled it "defiant obedience" after a concept we talked about the next day. Instead of saying "Screw you, I'm not going to do what you tell me", a sub can go into a scene with the mindset: "Screw you, I'm going to do exactly what you tell me, just the way you want it - you won't have anything on me!" I can relate to that line of thinking pretty well and I find it a lot more interesting, psychologically, than the stereotypical, childish "brat" behaviour we see in many CP videos. During the pony play, I was silently rooting for Pandora myself. Not because I didn't want to see her get spanked (I certainly did), but because my desire to see her do well was even greater. Her performance was so impressive, I was excited to find out how much further she could take it. It was like watching an athlete in action. I didn't want the tension to end. 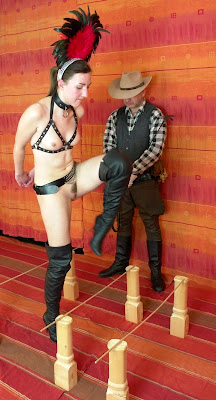 Later on, it was time for the customary SM-Circus feeding of the pets with yummy cold rice pudding. Marlin's injured knee obviously wasn't a hindrance here, so she could take part again. The two girls had visible fun making a mess of things and progressively turning the scene into a food fight (Marlin got a piece of beetroot inside one of her boots in the process). Before long, Direktor Sands stepped in, bellowing: "You think this is funny?" Pandora's and Marlin's giggles stopped abruptly while they exchanged sheepish glances. Spankings ensued. During the previous SM-Circus shoot I attended, the Direktor had asked Niki and Amelia-Jane the exact same question. "You think it's funny? Hmm?" I'm still waiting for a pet girl to reply: "Yes, I think it's bloody hilarious, and how do you like that?" What I wouldn't give to hear that line someday and see the aftermath!

Somewhere along the way, we also found time for another brief cameo from yours truly. After all, someone had to introduce Pandora to the circus in the first place, provide a reason why she was there. I quite like the idea that I am now responsible for trafficking both Miss Rutherford and Miss Blake. Especially because, unlike last year, I didn't have to lose a stupid game of dice this time. The premise was simply that Pandora was my pet girl (my newest acquisition, or something), but I couldn't get her to obey German commands, so I left her to the tender mercies of the Direktor for a day or two to train her. When I came back, she had of course mastered everything that was required of her, I tried out a couple of orders ("Sitz!", "Bei Fuss!", et cetera), and we happily went home. 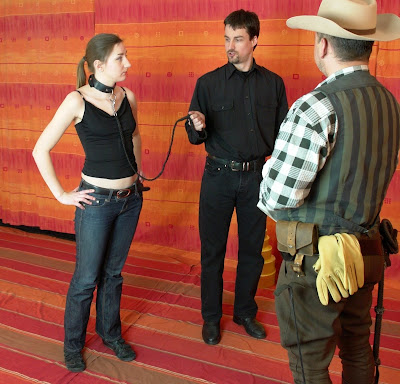 But the highlight of the shoot was, of course, the bullwhipping with the Gladiator from Hell. It was the first time Pandora tasted this implement, and SM-Circus worked something else into the scene that was new to them as well: Russian roulette. Well, not quite the kind of Russian roulette you see in The Deer Hunter, but an exciting setup nonetheless. Here is how it went: Direktor Sands, who is an accomplished sports marksman, would be shooting at a balloon. With a real gun, using real bullets! Actually, there would be only one bullet in the chamber - so at the beginning of the game, the probability that a shot would go off and pop the balloon was 1 in 6. With each successive round, that probability would increase.

Now, the interesting part in all this was that Pandora would be holding the balloon over her head - not quite a reenactment of Wilhelm Tell's famous "crossbow and apple" stunt, but close enough to produce a bit of adrenaline. Or, if she was afraid to hold it, she could opt to put the balloon aside so the Direktor could shoot at it while she watched from a distance. However, in that case, she would get strokes with the bullwhip from the Gladiator, and the number of strokes would increase every time she chose the "chicken" option. Are you still with me? It sounds straightforward and easy when you write it down like this, but on site, during the actual filming, the Direktor had to explain it to me twice before I understood what exactly he was trying to do. In turn, I took another two or three attempts until I had successfully relayed the plan to Pandora in English! Who says porn can't be complicated. 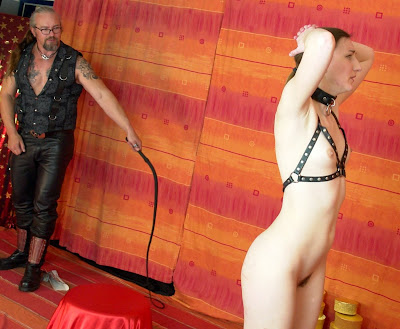 I don't want to spoil anything for you, you'll have to pay SM-Circus a visit yourselves. Suffice to say that it was an exciting scene. And totally safe with all the precautions we had in place, I assure you - but don't try this at home! I couldn't help but wonder whether what we were doing would be illegal according to Britain's recent extreme images law, with the presence of the gun and all that. All kidding aside, the bullwhip did make an impressive sound. Having recently mastered Eastern European-style canings, I suppose I'll have to practice with these monster implements someday, as the next step towards becoming the ultimate corporal punishment sensei. Well, not until I get a bigger garden (probably one with high hedges around it, too).

The Gladiator had only used the very tip of the bullwhip during the Russian roulette scene, which barely left any marks. Much to Pandora's (and my) disappointment! She pointed out that she had made a great big announcement post about the dreaded whip on her blog and needed something more to show to her readers, and besides, after having travelled all this way to Germany, she wanted the full experience for her own sake as well. What can I say, I love that spirit! So, we decided to do another, somewhat harder scene to round out the shoot. SM-Circus were kind enough to post it for free on Spankingtube:

Unfortunately, the original widescreen format is stretched to 4:3 during the processing, so everybody in the video looks rather tall and slender now. But as an appetiser, it serves its purpose. As for me, I've become a convert to pet play, anyway. Especially when it involves lovely actresses like Pandora and Marlin, who were both great to get to know and work with. If Direktor Sands ever needs a translator (or a human trafficker) again, I will be available.
Posted by Ludwig at 11:15 PM

Thankyou for writing these, they made me smile despite ALSO having caught doomFlu. I was really sorry not to see you at BoundCon! Hope you feel better soon. x

WOW! I am so into this. I may need some help being trafficked.

Pandora looks absolutely stunning, as usual, and the roulette deal is amazing.

Caroline: you wanna come with me next time I go? I can ask! :) (Do you speak any German?)