I'm back from "the dance" aka the Lupus Pictures shoot in Prague, and what a lovely time it was. Exploring the sights of a picturesque central European city with lots of history and culture, then spending Saturday at a garden party and thrashing some gorgeous girls, that's pretty close to my idea of a perfect holiday. I'll tell you all about it soon in a detailed travelogue and behind-the-scenes report. At the moment, I still have academic work to catch up on, so I'm leaving you with some first impressions (and pictures). 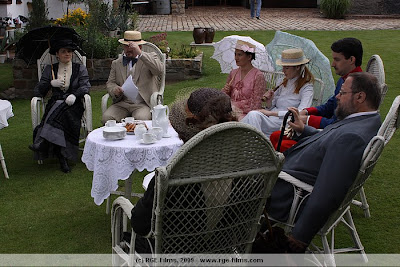 Adele Haze, my fellow international guest star, has already blogged about the shoot. In The annotated Lupus tweets, she collected the messages she had sent to her Twitter hotline on Saturday and added further commentary to them. She followed that up with Remembering the Pain, a more in-depth treatment of her caning / whipping scene. I suggest you check out both posts, they make for good reading as usual from Adele, and even in the year 5 AES ("after The Exchange Student"), it's not often that you get such a first-hand account from a Lupus victim.

What I thought I'd do today is take Adele's Twitter messages with commentary, then add my own commentary on top (add it below, actually, but you know what I mean!). I want to see what such a "doubly annotated string" looks like, it should be interesting and a bit of a novelty. Moreover, by shamelessly grabbing Adele's hard work, I don't have to write as much text myself, and I can get back to my academic work sooner (then get back to "proper" blogging afterwards).

So here are a couple of selected messages where I felt I had to add my own perspective. The italic text is the original from Adele, the normal text below is mine:

8:13am Woke up at stupid o’clock, freaking about the shoot. Do I still remember how to do it, it’s been several weeks! LOL Silly sleep brain. [I was oddly more worried about the acting than the pain. Which attitude last until, oh, about Saturday afternoon.]

By the time Adele was packing her bags in the UK, I had already been in Prague for a couple of days (and met the Lupus crew on Thursday evening for a first chat and a costume trial). It was nice to have some time to acclimatise, together with my mysterious Klingon mate to keep me company. Before the shoot, I was also more worried about the acting than about the action scenes. You might say: "Sure, obviously, because you don't get thrashed!" But you know how much I obsessed over dishing out a perfect, accurate, stylish caning before my first CP film with Mood Pictures, so this was a bit different. With hindsight, maybe I should have been more worried about the action, too (I'll get to that in a minute).

8:05pm They are asking Ludwig to shave his beard. He’s had it for 10 years! I think he’ll cry. [He was, in fact, very brave about it when the time came the following morning. Aw. Even when they shaved off his real moustache, only to stick on the fake, historically appropriate specimen.]

Yeah, Adele sent that message Friday evening, when we met up and had dinner with the Lupus guys - who broke the news to me that, you know what, the beard probably should go! I initially played coy, for the fun, but it wasn't a big drama for me, actually. Having a different (fake) beard was undoubtedly better for the role, and moreover, as a self-admitted sadist and severity freak, who loves this type of movie where the girls take excruciating beatings for the amusement of the audience, the least I can do is contribute a small sacrifice of my own. I mean, it's nothing, is it? The beard grows back in two or three weeks, which is shorter than the life expectancy of an average Lupus cane mark...

8:53am Ludwig and I are learning our Czech lines. [Of which, in fairness, we didn't have many.]

Still, it was a challenge, especially on such short notice. In my previous correspondence with Lupus, I had always been told that my lines would be in German. Can't remember how many times I asked them about this: "Are you sure? I can do some Czech as well if you like, just let me know." But no, they said, German is great. Until the evening before the shoot, that is, when I was suddenly informed: by the way, we'll do it all in Czech! Oh well. 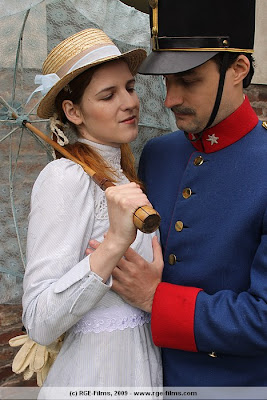 9:52am Ludwig’s first scene! His Czech is very… German. [As is the rest of him. Naturally.]

Actually, the uniform was supposed to be Austrian. But what can I say. I was still getting used to the fake moustache, which itched like hell and smelled of glue. Kind of difficult to do a convincing seduction / love scene when you feel totally awkward like that. Truth be told, I would have felt awkward, anyway: it was the scene I had been most nervous about after reading the script, and naturally, as it turned out, it was the first one to be shot. Swim or die! But on the other hand, it was great to have it out of the way early. From then on, everything was a cakewalk. And, speaking of cakes:

11:45am Resetting the scene. It’s a garden party now. I’m the maid and serve cakes. [They smelled so good. And guess who was the only person whose role didn't require eating.]

They were indeed delicious, yes. But in all honesty, I think it was even more difficult to sit there with the plates in our hands for hours and hours while we were hardly ever able to take a bite, except when the cameras were running. A touch of Greek drama there, Tantalos with the fruit branches.

2:32pm The first smacks have sounded. Gearing up to the canings of the other two girls. [And birchings, as it turned out. The girls were Ester Slaba and Vera Vranova, which I didn't mention at the time because I didn't know their screen names.]

Shame on you. I've been a fan of Ester for ages, ever since first seeing her in The Nightmare in 2003 ("Very cute, that redhead! And she acts well, too."). Imagine how happy I was when I learned (on Thursday) that she would be one of my victims! I didn't know Vera's screen name, but I had also seen her previously, in Friday the 13th. They were both great to work with, and commendably brave girls.

5:11pm Ludwig is done for the day, and so are the Czech girls. Just me to go. [I'll let him tell the story, but note that he was a lot better at it than he'll ever admit.]

Well, in a nutshell, the story is that the girls were tied up on a bench, flat on their bellies, which is a caning position I had never practised for, and one I didn't expect (reading the script, I had pictured a different kind of bench and position). So I didn't feel fully comfortable, I started out pretty tentatively, and I later missed a couple of the harder strokes. While the canings weren't exactly a catastrophe (producer Thomas Marco assured me that he was happy), they were nowhere near as good as I wanted them to be. Grrr! It's back to the drawing board for me (or back to the practice pillow, I should say). 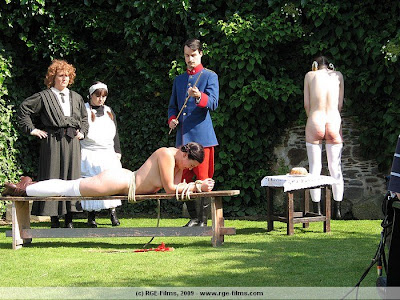 5:17pm Oh my dear fucking baby Jesus, I just saw the whip they’re using on me. [Lars Moebius showed up on set nonchalantly waving it around. Mr Haze could have acted less amused.]

A classic case of be careful what you wish for, I suppose. No wonder that I was just as amused as Mr. Haze. Adele did a scintillating, emotive CP scene afterwards, kudos to her and the two tops! Again, I recommend you read her own account.

10.09pm Subdrop has failed to come - probably because the film was a comedy. Bum is shredded though.

As for me, it was interesting to compare how I felt this time to how I had felt after the Mood shoot in February. Back then, I had been in equal parts exhausted and exhilarated, totally and utterly (obviously, part of the reason was that we had filmed through the night!). This time, I was no less happy, but in a more quiet and composed way, and I had a much smoother "come down". Maybe because the film was a comedy (albeit one with some rather severe CP in it), maybe because it was my second film already, maybe because having dinner with everyone afterwards made the transition back to "the real world" less abrupt than suddenly finding myself alone in my hotel room at 5 AM.

I suppose I'll speculate about it some more when I give you the full behind-the-scenes report, in early July. Before that, though, you are getting a regular movie review, and then I have some more great and exciting news for you next week. Better than the Lupus shoot, even.Stay tuned!
Posted by Ludwig at 3:33 PM

But Ludwig, you look great with that mustache and shaved chin. You should consider keeping this style.

frants: Several people told me that - how great I look clean-shaven, even how great I look with the fake moustache, blah blah. I think they're all a bunch of lying, flattering scumbags (including you, of course)! Mr. Haze was the only honest one when he grinned at me and said I look "life fifteen". But he was only jealous because he wasn't in the movie, you see...

Seriously, it sure was interesting to see what I look like without my beard. It had been ten years, so I could barely remember it myself. But I've grown it back now. I just like myself better this way.

By the way, I think I look pretty weird in the second picture here, the one with Ester. With the chin strap from the hat, I have a slight double chin, so I actually look chubby. Which is a novelty for me. Or maybe it was because I had been eating Pilsen goulash, roast duck with dumplings and all these tasty, traditional Czech dishes in the days prior to the shoot! It's possible that I had put on a few more than my usual 160 pounds.

In any case, they're gone again now, so what the hell. Beard back, extra weight gone...