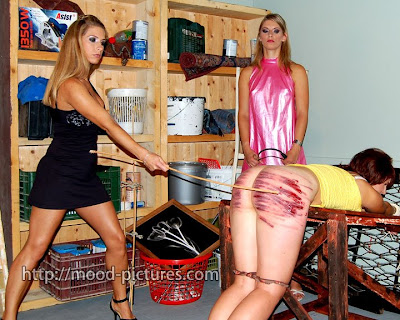 Producer:
Mood Pictures (released in 2008)
Entire Story In Fewer Words Than Are In This Sentence:
Lady Jessica serves cold and painful dishes
Victim Appeal:
Like most recent films from the Magyar severity freaks, this one features a fairly large cast of victims. Six different girls make the acquaintance of the whip, cane or paddle. The most prominent one is the beautiful Victoria Young, who has become something of a Mood regular this year - she has done four films for them at the time of this writing, including the previously reviewed South American Vacation. All of the models are pleasant to look at and take one hell of a beating, while the acting is usually rather dull. In other words, everything is as we have come to expect from Mood Pictures.
Gratuitous Sadism:
Lady Jessica, another Mood regular, plays the part of Evelyn Drake, a vengeful wife who discovers that her good-looking and wealthy husband regularly cheats on her during his business trips - he has a different girl in every city he travels to around the world. Heartbroken and brimming with cold rage, Evelyn decides that, instead of confronting her unfaithful husband, what she really wants to do more than anything else is punish the women he screwed around with. She enlists the help of a local mafia boss who gets her all the data on the culprits and lends her two of his female enforcers (one of them is "special guest star" Princess Donna from the US). Together, they travel from country to country and hunt the promiscuous "bitches" down one by one.

The first woman, Yvette, is a nurse. She is dark-haired and pretty. Evelyn visits her at work and gives her 50 searing cane strokes while her assistants hold Yvette down on a hospital bed. Donna counts the numbers aloud in English. Afterwards, they order the girl to walk down the corridor naked before everyone's eyes to complete her atonement. I guess they aren't afraid that someone will call security! The next one to get her comeuppance is Pandora, a platinum blonde drug trafficker currently doing time in Santiago Prison (which fans will remember as the location of a previous Mood film). Evelyn's mafia contacts give her access to the prison and she watches with sadistic glee while Donna whips the girl with the riding crop (10 strokes) and cane (45 strokes).

In segment number three, Evelyn takes revenge on a brunette antiques dealer who seduced her man (the role is simply and charmingly listed as "3rd Chick" in the credits). Evelyn overpowers the nameless merchant and ties her to a punishment bench she brought disguised as a sales item. A particularly vigorous 50 stroke caning follows, leaving the girl with bleeding welts. The next stop is an S&M studio which Evelyn's husband visited at some time (he's kinky, too!). Head dominatrix Esther receives 50 hard whacks with a wooden paddle from The Bride... errr, from The Wife. The final victim is a "luxury whore" by the name of Vionna Santoro, played by Victoria Young. She is the one who insulted Evelyn the most, taunting her during a phone call, so they saved her up for last. After a nice introductory chat at gunpoint, Vionna and her lesbian lover Erica get a single tail back whipping of, you guessed it, 50 lashes each.

As is the norm with this producer, the CP action is very severe, especially the third caning scene. Dark purple marks, contorted faces and screams of agony from start to finish. Sadists will have a good time.
Best Reactions:
I liked the second segment, set in Santiago Prison, most of all. Pandora the drug trafficker is played by porn star Avril. She is bent over a whipping bench and thrashed by Donna while Evelyn leisurely sits in front of her and watches her suffer. It's a great, intense face to face confrontation - Lady Jessica gives a nicely sadistic peformance, oozing with cruel delight as she makes eye contact with the victim, holds the girl's head up by her hair, pats her cheek and taunts her with lines like: "What's that little teardrop in your eye? How sorry I am!"

What makes the scene quite wonderful to watch is how Avril reacts, and her interaction with Lady Jessica. She takes her cropping and caning, which is hard enough to draw blood in a few places, with remarkable grit (especially for a vanilla porn girl). Half of her resilience comes from natural toughness, I suppose, but the other half is obvious refusal to give in to Jessica's taunting. The really interesting question is how much of her defiance required acting and how much of it is Avril "herself", out of character. In any case, their battle of wills makes for great viewing. The tension is palpable throughout.
In the beginning, during the cropping, Avril glares at Lady Jessica with a cheeky grin while calmly counting the strokes. When Donna starts using the cane, the smile transforms into clenched teeth and the counting becomes strained. Jessica's turn to smile now while she watches the girl's resolve slowly crumbling away. Avril's reactions get louder and more distressed with every lash, every new welt on her bottom, until she is howling and gasping in pain. Jessica eggs her on: "Scream, bitch!" When Avril lets out an agonised wail after the next, especially vicious stroke, the lady replies with a satisfied: "That's it!"

Alright, not exactly stellar, but I thought it was a funny line. All the more so because Tiana keeps the same expressionless, thuggish look on her face that she has during the entire film. Gave me a chuckle, that one.
Nice Psychological Touch:
I must confess that I was never a huge Lady Jessica fan. She is beautiful, an enthusiastic (albeit at times inaccurate) caner and a passable actress, qualities that have made her Mood's main domme in recent years. But I always found her somewhat contrived, somewhat artificial, and just not all that interesting as a top. However, her cool detachment and mannerisms work really well in this film, where she plays the slighted wife going on a petty revenge spree. The role seemed to bring something out in her and I quite liked her in it.

What helped, I suppose, is that her character's motivation is pure sadism, which is something I liked as a psychological touch in itself. The aim is not to uphold discipline in a school or to enforce the draconian anti-smuggling laws of some banana republic. No, in this story, the protagonist just wants "cruel, humiliating raw revenge", as she puts it. The suffering of the victims is not a means to an end, it is the end. There is a certain purity in that, which I enjoy as a sadistic viewer, and it suited Lady Jessica well, too.
How Good Is It Really?
This is one of Mood's most interesting efforts in recent memory, probably their best movie of 2008. As usual, the CP action dominates, and it is not for he faint of heart. Two of the scenes stand out in particular, the second caning because of the chemistry between the players, and the third one because of the sheer ferocity and graphic results. But "Sweet Revenge" is also built around an intriguing little idea and executes it well. Like many good ideas, the "globe-trotting angel of vengeance" theme is fairly simple, but I haven't seen it in a spanking film before and Mood's treatment is a lot of fun to watch.
The brief but effective opening scenes, Evelyn's melodramatic tearful discovery, her meeting with the crime boss, her constant voiceover narration that moves the story along, the pair of "female mafia interrogators", the Tarantino-esque use of music - this is delightfully cheesy CP pop art. Entertaining, at times even absorbing. And as I said before, the beatings are good. I really liked the tension in the second scene...

What You Learned:
Pedro, the director and producer of Mood Pictures, is a major fan of Kill Bill. Actually, I didn't really learn this from the movie - he told me himself. But it should be obvious to anyone who sees "Sweet Revenge".
Posted by Ludwig at 11:15 PM

Ludwig, thank you for the thorough and informative review. I think that we share the same likes and leanings where casting and action is concerned. I say this based on all your reviews, valuable resources.
Funny thing about Tarantino films in general: they are not squeamish about splattering blood.
It will be interesting to see the Mood version of Reservoir Dogs.
Side note, just remembered this scene now, it's in the House of Blue Leaves and has to do with O-Ren Ishii' gang and fight: The Bride actually stops herself from chopping up the terrified little gangster guy, and instead turns him over and smacks his backside with the flat of her sword before letting him go running. F/M, true, but cute.

OK, this one I can't even read, though I am glad to have seen the picture once (and only once!) so that I can better appreciate the skill involved in administering a severe but safe caning a la Pavel Stasny.

I love the severe canings in Mood Pictures but the paddling scene in this one is just great. Like the prison strap in Victimized 1 it is nice to see a new instrument of punishment.

Dave: I'm not a huge fan of paddlings myself. I prefer "sharp" instruments like the cane or whip over the "blunt" ones. They produce nicer marks in my eyes and also take greater finesse to wield. But that is all strictly a matter of taste, obviously. In any case, it is nice to see Mood use a different implement once in a while, even though the cane is my favourite.

Since you seem to own a copy of "Sweet Revenge", maybe you would like to give my Mood Pictures competition a try:

If you spot the "Kill Bill" reference in "Sweet Revenge", you can win a free Mood Pictures movie of your choice.

I agree, a great Mood production. And it was evry interesting to see Donna of Kink.com wield that cane with a ferocity she is not allowed to reveal in the Kink sites. I tried in vain to get her to comment this film in the Kink forum. - But for me the best line was from a tanned, naked Nelly who jumps up from a bench when Lady Jessica enters the S&M studio, with a "I'm outta here" as she quickly escapes. Sad though, that she escaped, but she was more or less innocent.