In case you are wondering: no, I did not acquire a taste for bestiality all of a sudden. There are some hard limits even to my twisted sense of fun.
I recently got a very nice message from Spanked Barbie, saying that she had just found my blog and liked it. She mentioned that she had lived in Germany once, and from that point onwards the email switched to German. A very peculiar, charming form thereof. I was reminded of something Mark Twain wrote in his famous piece The Awful German Language: "I went often to look at the collection of curiosities in Heidelberg Castle, and one day I surprised the keeper of it with my German. I spoke entirely in that language. He was greatly interested; and after I had talked a while he said my German was very rare, possibly a 'unique'; and wanted to add it to his museum."
Well, Barbie's German is undoubtedly a unique, and if I could, I would add it to my rarities collection without hesitation. She said that she especially enjoyed my language lesson clip with Niki Flynn ("in which you were, while educating the model, how one speaks German things"). She had also seen the video where Niki caned me. Barbie used the English word "caned" at this point, which is totally excusable - I am ashamed to report that there is no verb for "to cane" in German. Instead, we have to employ more cumbersome expressions like "to punish / thrash / chastise someone with the cane".
On the plus side, I think that our noun sounds way cooler than the English one: "Rohrstock". It's got a nice harsh, intimidating ring to it and there was no question that I had to use it in my blog name somewhere - while "caning palace" sounds truly and utterly lame, "Rohrstock-Palast" is an awesome beast of a word! Niki Flynn once told me that, in her opinion, it makes all the sense in the world that "cane" is a masculine noun in German: "der Rohrstock". An interesting observation that hadn't really occured to me before - as a German, you tend not to think about word genders, you just use them naturally (but I pity the poor foreigners who have to memorise all this stuff!).
Anyway, I digress, as usual. Back to Barbie's email. She wrote that she saw the video "where Niki Flynn 'caned' you". I should mention that she used the formal German "you", similar to the now extinct English "thou". [Edit: thanks to Hardwood for pointing out that "thou" was actually the familiar address, not the formal one as I had always assumed. I leave my post the way it was, though - somehow, in light of the fact that it was inspired by Barbie's mistake, it is fitting that I made one of my own.] We still have the distinction between the formal ("Sie") and the familiar ("Du") way of addressing someone. It wasn't really necessary to employ the polite form here (I don't mind!), but a nice touch nonetheless. So, basically, she is saying: "I saw the video where Niki caned thee." That's a great little sentence in itself. And afterwards, Barbie added: "Nice donkey, by the way."
I was pretty flabbergasted at first - what donkey is she talking about? Did I miss something very important while shooting the clip? But it didn't take long to figure out that she had simply looked up the German word for "ass" and ended up with the animal ("Esel") instead of the bottom ("Hintern"). "Nice donkey." Priceless! That gem gets a place of honour in the Rohrstock Castle collection of linguistic curiosities. Mark Twain would be proud.
He would also point out that there is no shame whatsoever in slipups like these, because: "A person who has not studied German can form no idea of what a perplexing language it is. Surely there is not another language that is so slipshod and systemless, and so slippery and elusive to the grasp."
My English is pretty good, but far from flawless. In this day and age, everyone speaks English, anyway! Not much of an achievement. On the other hand, there's something heroic about every native English speaker who uses a foreign language. They don't really need to, so I have all the more respect for the people who try. Especially with a treachorous wench like German. Considering that it had been ages since she lived here, Barbie's effort was quite good, actually. I wonder how I would have fared under similar circumstances. And I really appreciate the gesture.
So, thank you for the kind message (and for the compliment, by the way). If we ever cross paths, I'll be more than glad to express my gratitude with a free language lesson. Ludwig-style, with the usual emphasis on counting.
In a followup mail, Barbie assured me that it would be alright to share her wonderful word creation with the rest of the spanking community. So that's what I'm doing - it's simply too good to pass up. Be sure to also visit her blog, an entertaining read. To encourage you, I am including a picture of Barbie's gorgeous spankable donkey. 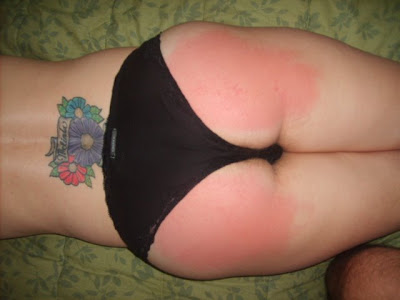 Barbie, I am definitely laughing *with* you on this one!

Oh god this made me laugh! And I'M the one who wrote it! hahaha. Ludwig - too sweet and I appreciate your fondness for my butchered German! lol. I tried hard. By the way - I might have to plan a trip to Germany JUST for the language lesson!

A google translation of Niki's comment probably proves her point:

"Best of all is the automatic
Tissue translators, the extract your sweet honey
Words and spits them rape in miracles, too
behold!"

The German might be easier to understand, even for me!

Indy: We're all laughing *with* Barbie I think! Anyone courageous enough to tackle "The Awful German Language" deserves praise, not ridicule. And the results in this case were really charming.

Besides, I've had my own share of funny slipups. At the German pet girl shoot with Amelia-Jane and Niki, I was translating the director's instructions for them: "Take the item, with your mouth, out of the bowl..." But I pronounced it "bowel". That one got a cheerful round of laughter.

Niki: Me rather are the errors, which are committed a crime by genuine humans. Because like it here all see can, be the of the machine spread nonsense only half so merry.

(Interesting, this is the first time that I've tried a German to English machine translation - with, shall we say, less than successful results. As I just said, I think I'll stick to making my own mistakes.)

Barbie: I'm glad that you like the post. Thanks again for your nice message. You have a standing invitation for a language lesson including a motivational instrument of your choosing.

Smallhanded: Speaking of noun genders, it's interesting that, in German, a specific set of tools often seems to cover all three of them. Like cutlery: "the knife", "das Messer", neutral; "the spoon", "der Löffel", masculine; "the fork", "die Gabel", feminine. Now take a look at these kinky implements: "the paddle, "das Paddel", neutral; "the cane", "der Rohrstock", masculine; "the whip", "die Peitsche", feminine.

Thank you for pointing that out, Hardwood. I had always assumed that "thou" was the formal way of addressing someone - probably just because of the archaic nature and the solemn sound of the word. But I just did some research on it, and you are right, of course. "Thou" was actually the familiar address while "you" (plural "ye") was always the polite one.

Interesting, you just corrected a long-held erroneous assumption of mine. I think it's one many people tend to make, because "thou" is mostly seen in somewhat "formal" contexts like religious texts today. So it is perhaps natural to think that "thou" is a formal address, when in reality it is just the opposite.

I've edited a remark into my original post, even though I'm leaving the rest of it unchanged. Somehow, in light of the fact that it was inspired by Barbie's mistake, it is fitting that I made one of my own.