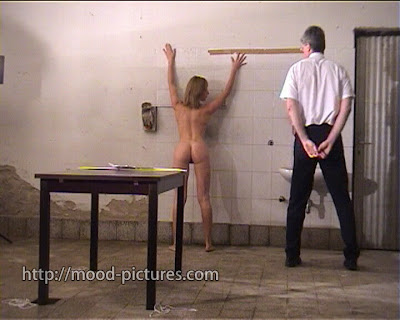 Producer:
Mood Pictures (released in 2004)
Entire Story In Fewer Words Than Are In This Sentence:
Hungarian communists torture student girls
Victim Appeal:
The movie is divided into two nearly identical segments - each time, a girl is arrested by the secret police under some pretense and given a sound caning. Part one stars a brunette going by the handle Vivee, part two a pornstar named Demi Cool. The victims are reasonably pleasant to look at, with round spankable bottoms, but fail to make any sort of impression otherwise. They're pretty terrible, actually. One is shy and quiet, the other bored and bitchy. Both look and sound as if they can't wait for the shoot to be over.
Mind you, it makes for interesting viewing if you are turned on by non-kinky, moneygrubbing models going through something they are really not enjoying at all. I'm usually not, but Demi is so annoying that I confess to a certain amount of wicked amusement over her unpleasant ordeal. Watch her flippant, bubblegum-chewing behind the scenes interview to have your worst "empty-headed bimbo" pornstar stereotypes confirmed. She obviously received more than the free ride she expected and says afterwards that she will never, ever do a CP film again. Which is undoubtedly better for everyone, especially us viewers.
Gratuitous Sadism:
Each girl is forced to strip, tied to a table (with some rather flimsy-looking ropes, it must be said) and given 50 strokes of the cane. There is a fair bit of dialogue, actually, from the secret police officer (played by Mood regular Maximilian Lomp) who administers the thrashing and wants to extract information about the "conspiracy" the students are involved in. The canings are not as ultra-severe as some of Mood's later work, but fairly respectable nonetheless, leaving the victims' bottoms thoroughly covered in nice red stripes.
Best Reactions:
Vivee is the more animated of the two, crying and whimpering. Demi Cool, even though she squirms and groans quite a bit under the cane, resorts to a mixture of stoicism and sarcasm. Before long, she starts talking trash towards the police officer. "You son of a bitch. Are you enjoying this? Sadistic pricks. Can't you fuck a girl's cunt?" Later on, she admits to a conspiracy - with her lesbian girlfriend. "I am active, she is passive. I lick her. I love it when she comes." It's all pretty low and bawdy, but almost funny with her deadpan, venomous delivery.
To leave aside my elitist sadistic banter for a moment, it's good to know that the experience wasn't traumatizing for Demi. While she certainly won't do another CP film, she manages to navigate this one with casual (and foul-mouthed) defiance. That's refreshing to see. I'm almost starting to like the girl in spite of herself. Her reactions aren't great in a conventional sense and I don't find them the least bit erotic, but they are undeniably memorable. In a Full Metal Jacket sort of way.
Best Line:
"I bet when you're done here, you'll jerk off in the toilet!" Demi Cool's gutter mouth again. Ouch.
Nice Psychological Touch:
While the action itself is pretty formulaic and straightforward, the framing stories are interesting. The interrogation and caning scenes are presented as a flashback. In the first part of the movie, the secret police officer, now with a new job in the post-communist era, is sitting in a pub, smoking a cigarette and reminiscing about the "good old days". He recounts how they could do whatever they wanted, how much he enjoyed his work and how he caned girls just for the fun of it. Maximilian Lomp really looks the part of the seedy, unapologetic ex-torturer and does quite a good acting job.
In the second part, Demi Cool is riding in a car, with some people looking for the former secret policeman. When they confront him, he denies ever having met her and claims that he never hurt anybody. "I really sympathise with you and I am deeply shocked, but I can't help you!" Now he's the one who is scared, to her obvious delight. It's a fun little scene, not superbly acted, but a neat idea.
How Good Is It Really?
The two parts of "Ancient Regime" were originally released separately. Part one was the very first movie by Mood Pictures. They themselves openly admit that it isn't one of their stronger efforts. It was still a learning experience, the camera work is a bit shaky and in an email to me, Pedro (the director and producer) once described the shoot with Demi Cool as "really terrible". Still, I think it is a respectable debut by any standard and Mood fans will like it. The interrogation room is cool, really run-down and dirty-looking like something out of Hostel. The movies are now sold as a single DVD and at a good bargain price.
What You Learned:
Counting up to 50 in Hungarian.
Posted by Ludwig at 9:19 PM

This has to be my favorite "What You Learned" segment from all your reviews! Mind you, the others contain interesting analyses, but this one sums up the film so nicely (at least as far as I'll ever know!)