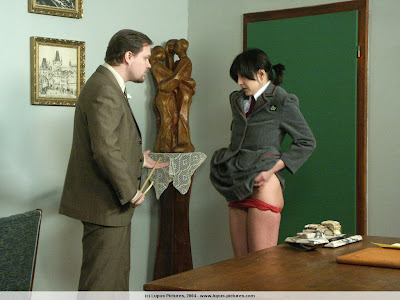 I do agree - it's certainly one of the best Lupus movies ever :)

Yes, a great film that put Ms Flynn firmly on the spanko map. I suspect that the satire is there in some of the other films, too, although likely to be lost on viewers who don't speak Czech. (e.g. The class sneak who shares the christian name of President Havel's rather unpopular second missus, the stroppy student, Benesova, who hums the Internationale, and gets the headmaster singing it, and also has the surname - in feminine form - of a prominent interwar politician.)

Just found your great blog and will come back often. My, how I love to bend over for a severe caning on my bare bottom... just love it... from the pain, to the pretty velts... always make me so aroused... mmmmmmmm just can't get enough... ;-)

Ah, fond memories. Thanks for such a lovely and kind review, Ludwig. But don't think your honeyed words will get you out of that 30 strokes you've got coming... ;-)

My "honeyed words" are exactly what the movie deserves, nothing more, nothing less. I pride myself on being an impartial reviewer. Doesn't matter if you are a friend of mine - if you are in a crappy movie, I'll say so.

Well, actually... What I'd do in such a case is, I wouldn't review the flick in the first place. I'd much rather spend my time on the ones I like.

As for your tree... err, threats: thanks so much for reminding me of my impending comeuppance (as if I could forget). One thing is for sure, though: I'm not going to scream hysterically like you did in the movie reviewed above. Sorry, but I'm not squeamish, you know.