I'll be off on a trip next week, on my way to visit a friend. Posting will continue - I have some stuff written in advance. I'll also sneak in a travel report if I can find the time (in between the various kinky exploits we have planned).


As a an appetizer for you before I depart, here is something from the last time we met. Much too long ago, in the autumn of 2006. You can find my own verbose account of events here. The victim's, as you can well imagine, is more concise (Dances With Werewolves, p.183):

"Soon after [Tom] left, my third German friend, Ludwig, arrived and came straight up to my room. We hung out for a couple of hours and then went out for dinner. The whispered exchange between the guys at reception didn't need translating. Three different guys in as many nights. Ludwig suggested that he storm into the lobby shouting that the American whore in room 310 had stolen his wallet. I was all for it. I was still high from the shoot the day before and the public drama would have rounded off my Germany adventure perfectly. In the end, wiser judgment prevailed. Instead, we had a German lesson in my room that involved a cane and me counting to thirty. I imagined the desk clerks eavesdropping outside, exchanging startled expressions."

Why eavesdrop when you can peep through the keyhole? We're all voyeurs at heart. Now, when we made this video, I had no plans of ever publishing it. I didn't even know that I'd be writing a spanking blog one day. But I figure, now that I have one, why not put the clip on it? Share the visual memories with my esteemed readers (besides, in light of forthcoming events, I wanted to draw first blood from the American bratling, heh heh...). It's not high art, but an innocent little piece of kinky fun, and hopefully, you're going to like it. 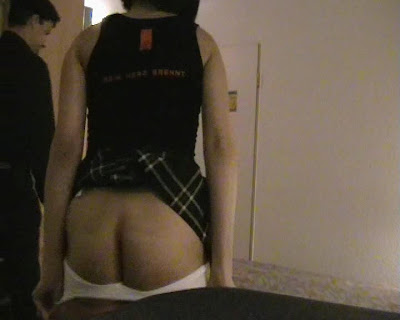 Several caveats. First off, the technical quality isn't great. I recorded with my own little camera and didn't even have a tripod, so we put it on a chest of drawers in the room (the black blob at the bottom of the picture). No extra lighting, no fancy equipment of any kind. Secondly, it's just a straightforward punishment scene with "make stuff up as you go" dialogue. So the script is not going to win any awards, because we didn't use one. Third point, I was a bumbling novice as a top and my caning technique was considerably worse than it is now. It didn't exactly suck, but I can't help cringing when I watch this today. On some of the strokes, the accuracy is just shaky.

All that said, it's a free video, isn't it? And noted flaws notwithstanding, a cute little caning scene that was fun to make. My "rowdies who play around with worms" line is a joke about Niki's shoot the day before (don't ask). Then the fish out of the water effect when I switch to German. Niki barely understands half of my disconnected ad-lib ramblings, which makes her both nervous and amused. I like her suppressed grins. Ah, just watch it yourself.

I almost forgot: Niki wants me to emphasize that it was our very first scene together and that she was nervous. That's a good one - she'd already done four Lupus films at the time, and she is nervous about playing with me, the geeky philosopher. Go figure. Freud was right, a woman's mind is inscrutable. Anyway, here is the video: 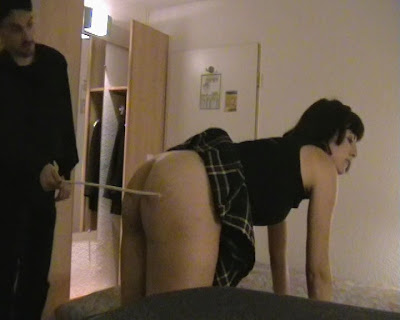 I remember I had just bought that shirt from the Rammstein fan shop and was so happy to be somewhere warm enough to wear it!

Hey, I know all the words to that song - doesn't that mean I've achieved some measure of "didactic success"?

As I'm writing this, I'm keeping in touch with the Bavarian side of this blog (i.e., I'm listening to Klaus Wunderlich's Beer Barrel Polka... I know, I have weird tastes in music sometimes :D)...

Heh. I have that t shirt too, but not the sleeveless version. Rammstein is the reason I know some quite odd German phrases.

@ Maid Girl: I don't do 1 on 1 sessions, I only do videos. But I'm sure that there is a helpful kinky German out there somewhere who would love to teach you better German with his cane. The Spanking Liebe-Forum is one good starting point.

And hey, if you are open to doing it on video, I'd be happy to take you along to a shoot. I suggest Lupus Pictures, since they are the best in the business. *grins*