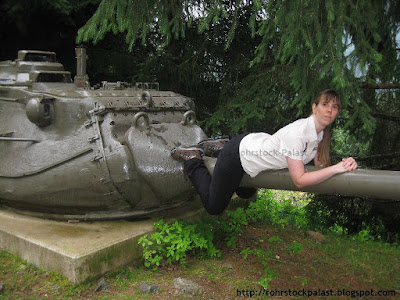 A while ago, Ludwig and I had the chance to visit a Cold War field fortification. Luckily, the weapon systems stationed there never had to be used. Today, the whole facility makes for a very interesting museum. 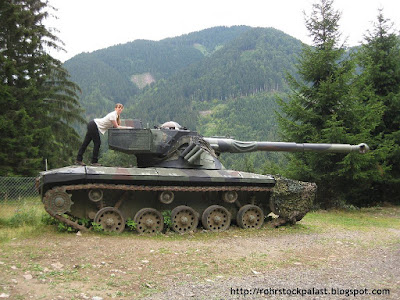 While the idea of people killing each other in war makes me sad, the idea of military discipline is a hot one in the context of kinky fantasies. And so I couldn't resist the temptation to use the old systems for a much more peaceful and sexy purpose than the one they were originally made for. I don't know how long we stayed there exactly, but it was quite some time and we took a huge bunch of pictures! 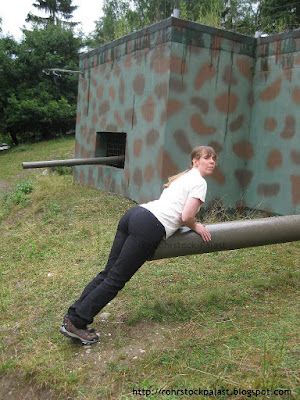 Bending over like in the picture above would have been rather dangerous, had the gun still been in use. It would be a nice position for a caning or whipping, though, in my view. 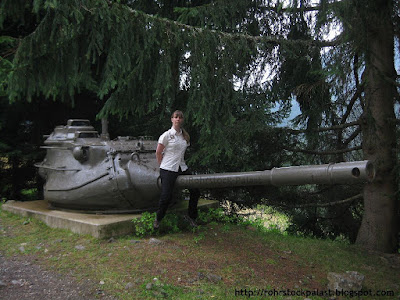 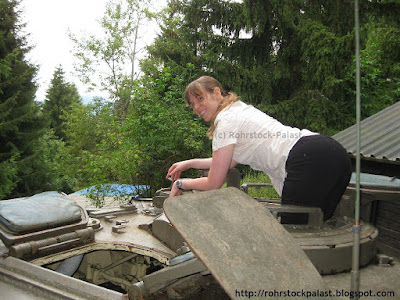 While the pictures, or at least the ones shown here, aren't very explicit (hey, there were other people around!), I still like them very much. Okay, despite of the other visitors I couldn't refrain from having Ludwig take a few naughtier photos when no one could see us. I'll show you those in a follow-up post, soon. 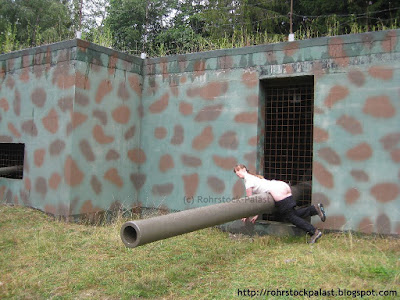 Well, except for this one, which is already a bare bottom picture. I guess this position is much safer than the one in front of the barrel. Seems to be quite suitable for a spanking, too, though. Hope you enjoyed the pictures. If you like them, there is more to come!
Posted by Kaelah at 10:59 PM

Looks like you had a fun day. What if a colonel saw you bent over his gun? Would he use his crop on you?

The pictures are OK. You, on the otherhand, are very interesting. Looking forward to the follow up pictures.

Hmm, military equipment, a means of causing destruction and death. Interesting photos, Kaelah, although, like Simon, I would prefer you with a naval gun in a female version of a "Kissing the Gunner's Daughter" scene! I'm sure you've heard the expression.

Talking of death, the rest of my comment is completely off thread, but relates to something which could eventually affect all of us. What does a spanko/switch do when their sole partner dies? Mine, who was both my spanking partner and my life partner, died some time ago.

Recently, when clearing out a wardrobe, I had to move the boxes and bags containing our instruments, lovingly collected and used over our many years together - the range of canes, crops, whips and prison straps, and the collection of genuine old Scottish leather tawses, all well used and enjoyed during our regular sessions.

It suddenly struck me for the first time that these would never be used again, and that I would never again have the pleasure of spanking or being spanked. I don't know why this realisation hadn't dawned on me before, but I found myself stunned at the thought. On a practical front, I wondered what would become of my collection. It is not the sort of thing to leave openly around the house, nor are the items likely to be welcomed by the local charity shop (assuming I could bear to let them go). What would my offspring think of me if they came across them after my death? Or a new life partner unaware of my fetish and who thinks spankos are weird perverts?

It seems a great shame to destroy or dump such a collection, but in the end I suspect there will be no alternative. Our spanking was a very private activity and we were never part of a local "scene" so I do not have spanking friends or acquaintances.

Any thoughts? What will you do when your partner dies? What will happen to your instruments when you find yourself in my situation?

(Sorry to raise a new thread on such a gloomy topic!)

Military settings have always appealed to me. Hierarchy, uniforms, very exact standards of how everything is done to make things run smoothly, appreciation of cameraderie, bravery and toughness ... perfect ingredients for a good fantasy and that's just what I felt before I knew how chilling those armour and artillery guns can look in the background.

Cool! Glad your having fun!
= Eric

@ Our Bottoms Burn:
I suppose so. Or maybe his cane...

@ Simon:
I enjoy older scenarios and equipment much more, too, so I absolutely get your point!

@ tawser66:
Thanks a lot for your very personal and thoughtful comment. Unfortunately I wasn't able to answer you faster since I was away and didn't have access to the blog for several weeks. I am very sorry to hear that your beloved partner died! And I can very much relate to your question of what to do with the implements which you don't use any more now.

I know that other spankos also ask themselves the question: What will my children think of me when I die and they find the implements? As I wrote in other posts before I would like to give our children a hint, anyway, should Ludwig and I be lucky enough to have children in the future. I would also try to explain to them that people like different forms of sex and that it is all good as long as everyone involved enjoys it. That way I hope to make sure that I don't have to worry about the kids should they stumble across any BDSM-stuff after our death.

Of course I haven't thought too much about that question because Ludwig and I are still young, but if one of us died, I guess the other (after a certain period of time) would possibly meet kinky friends to talk and maybe also to play from time to time. So maybe our implements would still be needed. And we definitely both wouldn't want a partner who does not at least respect our kink (because this is a part of who we are). So there wouldn't be any need to dump the implements in order not to shock a potential new life partner.

Since you write that you don't have any contact to your local community or to other spankos in general, your question is difficult to answer. If I were in your situation, it would be hard for me to dump the collection. On the other hand it could of course also be liberating.

My question is: Could you imagine to become part of any kind of kinky “real life” community or meet other kinksters from the online community? In that case I definitely wouldn't dump the collection! I don't know where you live and what your local community is like (or whether you would be willing and able to do some travelling in order to participate in one of the bigger parties), but I am sure you would be very welcome.

A very good example for someone who lives out his kink with a small group of good like-minded friends now that he is older and has lost his beloved wife is our friend Peter about whom we wrote in this post.

Of course I can absolutely understand if this is not your thing and spanking is something you can imagine in a partnership only! But should the idea of meeting like-minded people and maybe even playing with them have any appeal for you, then I can definitely encourage you to give it a try, there are certainly lots of different ways of getting to know and meeting like-minded people!

@ Svetlana:
I absolutely agree with you!

@ Klumarer:
Less clothes (well, at least on the bottom) next time. ;-)

@ Eric:
Thanks, we were having fun indeed!

what a sumptuous bottom, you must've really enjoyed posing for those shots

@ Anonymous:
It was lots of fun indeed!

Hi Kaelah love reading your blog where were the field fortification pictures taken ?

@ Anonymous:
I am happy that you enjoy reading our blog. Thank you for commenting! I don't want to post the name or exact place of the fortification (the operator might not be too happy to be mentioned on a kinky blog), but I can tell you that we visited it on holiday outside Germany.