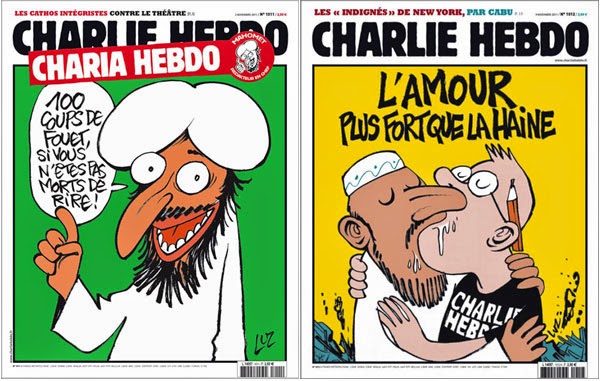 Left: "100 lashes if you don't die from laughter!"
Right: "Love stronger than hate"

As you have undoubtedly heard by now, two Islamic extremists attacked the office of French satirical magazine Charlie Hebdo, gunning down 12 people. Charlie Hebdo had been receiving death threats for years because their caricatures made fun of Muslim fundamentalists. They also made fun of Christian fundamentalists, politicians from all parties, feminists - no group or belief system was off limits for satire. About the threats against them, cartoonist Stéphane Charbonnier who was among those murdered on Wednesday once said: "It perhaps sounds a bit pompous, but I'd rather die standing than live on my knees."

The freedom of speech is one of the cornerstones of an open and enlightened society. Whatever one thinks about the caricatures of Charlie Hebdo, whether one considers them great, funny, juvenile or in poor taste, it is important that they exist. As Markus Becker points out in this German article on Spiegel Online: "A liberal democracy needs blasphemy. For blasphemy questions dogmas. And dogmas - be they religious or political - with their claim to absolute truth are the natural enemy of critical thinking."

First and most importantly, we would like to express our condolences to the families and friends of all the victims. Secondly, we have reprinted the Charlie Hebdo cartoons above as a sign of our determination that the perpetrators will not achieve their aims. Attacks like these will not discourage us from exercising our right to think, speak and write freely as we always have. The pen will win out over the sword.

1. Chumming up with the right-wingers who have always had a problem with "those bloody immigrants" is exactly the wrong reaction to Wednesday's attacks. The vast majority of the Muslims in Europe are peaceful, nice, decent people. Upholding the values of the enlightenment means rejecting both Islamic extremism and xenophobia.

2. Let's not forget that Christian fundamentalists aren't much better than their Muslim counterparts. While they haven't gunned down anyone over a Jesus caricature lately, there were numerous death threats when Monty Python's Life of Brian came out in 1979. Oh, and they hate pornography, too.

4. And before we get too comfortable on our high horse, let's also remind ourselves that the kinky community has its own dismayingly large share of prudes, homophobes and censorship advocates. We've seen enough discussions where fellow kinksters argued that severe CP videos should be banned because they are "disgusting", that we should all censor ourselves so as to not offend vanillas, or that a forum should not permit M/M pictures. Upholding free speech means contradicting such viewpoints in our community as well - and defending people's right to express them!

Ludwig and Kaelah
Posted by Ludwig at 11:30 PM

I am not convinced there is any difference between Islamic extremism and Islam. The narrative of Muḥammad, as written by his followers, is based on thievery, murder, and salvery.

@ Our Bottoms Burn: As an atheist, I'll happily agree that the "sword verse" and similar passages of the Quran are utterly at odds with a modern, enlightened society. However, the same is true with various passages in the Bible. The angry and vengeful God of the Old Testament, if he were real, would rank among the worst tyrants in history. And while I'll grant you that Jesus gave a more peaceful example than Muhammad, the New Testament is also filled to the brim with condemnations of unbelievers, homosexuals and Jews (who are all going to hell).

Consequently, it comes as no surprise that Christians have throughout the history of their religion often committed atrocities every bit as bad as what Islamic extremists are doing today.

The reason why we are no longer burning people at the stake here in the West is that Christianity was gradually "domesticated" by the Reformation and the Enlightenment. Islam hasn't had such a transformation process, but I see no reason why it should not be possible. If Christianity can modernize, so can Islam.

The empirical evidence seems to suggest that, while the fundamentalists are becoming more and more extreme, the majority of the Muslims who live in the West are slowly being "Westernized" and secularized.

When the majority of peaceful Muslims openly and forcefully condemn the extremists, then I will believe there is a difference.

@ Our Bottoms Burn: All you have to do is use a search engine and read news articles for 15 minutes.

The terrorist attack in France was openly and strongly condemned by national Muslim organizations like the French Muslim Council ("an extremely grave barbaric action"), the Muslim Council Of Britain ("nothing justifies the taking of life"), and the Council On American-Islamic Relations ("we strongly condemn this brutal and cowardly attack"). It was condemned by the Al-Azhar Seminary, the chief religious authority in the Sunni world. Heck, it was even condemned by the horrible backwards regimes in Egypt, Syria, Saudi Arabia, Iran...

As for the population, there are literally thousands of European Muslims condemdning the attack in the social media, or taking part in the candlelight vigils in Paris and elsewhere.

Again, being an atheist and someone who is critical of religion, I am well aware that Islam has a much bigger problem with violent extremism than any other religion of today. I'll happily agree with that assessment. But these extremists are still a minority. To claim that the majority of Muslims does not clearly condemn such attacks is just uninformed.

I would like to express my appreciation for your post on the atrocities commited in the name of Allah.

However, it will not be read by those it is directed at. I even wonder whether they are able to read.

@ Ramon Herzog:
I guess you are right, most of the people this post is aimed at won't read it. But first of all, sometimes I just have to write down the thoughts that are bothering me. And secondly, maybe this post reaches at least some of those who would like certain critical topics or kinks or whatever not to be discussed because they aren't compatible with their views or taste. Maybe some of these people can be reminded how important freedom of speech is and that living in a democracy means having to deal with people who think differently of have different tastes. Concerning the ability to read – I wished one could say that education is a 100 per cent effective way of raising tolerant and critically thinking people. I am sure that education helps because it enables people to question opinions critically, but unfortunately there are also well-educated people who have very intolerant and narrow-minded, sometimes even brutal and dangerous views.