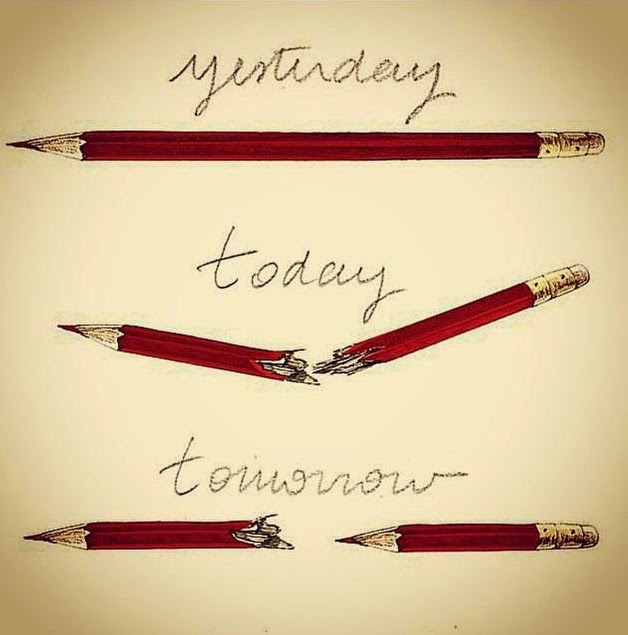 This might be the strangest combination of labels that we had on this blog, ever. Because today's post is a follow-up piece on our post Nous Sommes Charlie which contains both a more personal comment from me on freedom of speech and some dark kinky humour.

I have to admit that I am a bit reluctant to say about myself that I am Charlie Hebdo, because I am not as brave as those who died in the recent dastardly attack driven by ill-will and blind hatred. The news shocked me and made me incredibly sad. As Ludwig and I already wrote in our recent post, we consider freedom of speech one of the most important human rights and yes, even though some people don't like it, that freedom of speech includes blasphemy.

Unfortunately, this isn't the reality in Germany. We still have a blasphemy paragraph in the German Criminal Code which says: Who insults the content of religious or ideological beliefs publicly or through dissemination of writings in a manner that is likely to disturb the public peace, shall be punished with imprisonment up to three years or a fine. This paragraph means that the caricaturists of Charlie Hebdo could theoretically have been imprisoned according to German law, if only there had been enough religious people going nuts because of their cartoons. As critics have pointed out, this law confuses perpetrators and victims - it defines as the "disturbers of the peace" not those people who respond to religious satire with violence or threats of violence, but the people who created the satire. This is sick and wrong! I hope that this medieval relict will be disposed as soon as possible. Unfortunately, I don't think that this will happen. Conservative politicians in Germany even called for a tightening of the law not too long ago.

On the other hand, fortunately freedom of speech is usually rated higher than claims of blasphemy in the legal practice. For instance, German stand-up comedian Dieter Nuhr was accused of revilement of creeds and religious societies by a German Salafi because of his critical satirical statements about Islam. The public prosecution department decided not to bring a charge against Dieter Nuhr. They stated that what Dieter Nuhr does can easily be recognised as satire and that his works lack any signs of xenophobia. 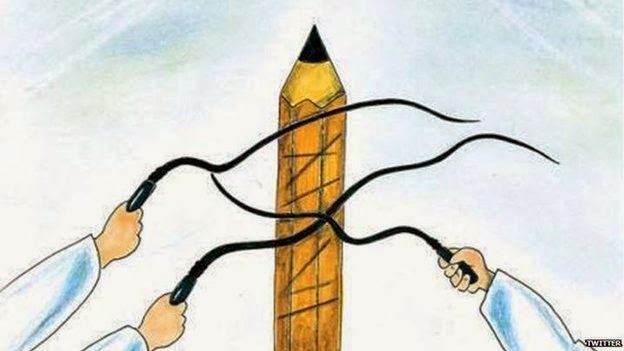 On the day we published our post about Charlie Hebdo, I once more became aware how lucky I am to live in a land which grants people freedom of speech (even though there is still room for improvement) and where I can write a blog without the fear of being persecuted. Because on that very same day, Saudi Arabian blogger Raif Badawi received 50 whip lashes for "insulting Islam". His "crime": He created an online forum on which people could critically discuss Saudi politics and Islam. His verdict: 1,000 whip lashes, 10 years in prison and a fine of about $ 267,000. The whipping is carried out weekly, so he still has 19 whippings to come, death in small increments.

But, what can we do about oppressive regimes and terrorists? I realised that as someone who lives in a country where I have the important human right called freedom of speech, I shouldn't take it for granted. The first thing I can do is exercise this right and voice my opinion on the matter. For instance, I've already signed Amnesty International's petition for Raif Badawi. Defending freedom of speech also means trying to defend other people's right to put forward their opinions - not just in cases like this, but also and just as much so in cases were I disagree with the opinion being put forward.

The second thing I can do is to see the fanatics for what they are, bullheaded and ridiculous people. When I looked for material for our post about Charlie Hebdo, I was reminded of a clip I wanted to share with you, anyway, because it is a great caricature of the stupidity of terrorism and it even has a brief reference to kink. I think one of the best things to do in times of horror is to laugh into the face of those who try to take our smile away. So, here is a Jeff Dunham video for your enjoyment. If you don't know Achmed the Dead Terrorist already, you can find his introduction video on YouTube.


For those of you who aren't into morbid humour: You are of course entitled to your preferences and opinion. Please don't watch the clip and look for something else that makes you happy! Time is much too short to waste it on things one doesn't like.
Posted by Kaelah at 10:52 PM

I am sure that you will agree that this is a complex issue. Freedom of speech and religion is at the core of liberal democracy and those of us who live in liberal democracies agree with the observation of Winston Churchill ‘’It has been said that Democracy is the worst form of government except all those other forms that have been tried from time to time.’’ Yet most of the world had not embraced liberal democracy for all sorts of reasons. Tribal/clan loyalty, Somalia and Afghanistan are examples. Religious purity as in Saudi Arabia and Iran. Stability as in Russia and China. As the US learned, I hope, from Afghanistan and Iraq these people reject our liberal democratic ideals.
So what does this mean? Well every liberal democracy has determined that certain types of speech must be controlled so there is precedent. Traditionally Islam proscribes any depiction of the human form. It also takes super offense at depictions of Mohammad. Some including Pope Francis apparently think that depictions of religions that are offensive to that religion should be prohibited. I am not sure I go that far but it does seem to me that the points being made by Charlie Hebdo can be made in words without any pictures. I have to wonder if everyone would be better off if discretion had been exercised?
Sorry if I rambled.

@ Bob S:
Thanks a lot for sharing your thoughts on the subject! The point you mention is one that can be heard in the debate quite often. I have to say that the suggestion to practise self-censorship in order not to hurt other people's feelings is something I strongly disagree with, though. Because I think it is an argument which works in favour of intolerant people who think that their beliefs are sacrosanct. Therefore in my view it is very dangerous for democracy and freedom of speech. As Markus Becker pointed out in an article on the subject: "A liberal democracy needs blasphemy. For blasphemy questions dogmas. And dogmas - be they religious or political - with their claim to absolute truth are the natural enemy of critical thinking."

The point is, there are thousands of different religious (and political) beliefs out there and often they carry certain rules and also dogmas with them. If all religious believers insisted that everyone else had to accept their rules in order not to insult them (like not showing pictures of certain figures), our freedom of choice would be quite small. We would, for instance, all be vegetarians (Buddhism), don't name our diseased ones or show pictures of them (Aboriginal culture), have to wear certain clothes and so on.

Most religious people don't insist on others obeying their rules, though, as long as they are allowed to live according to their religious beliefs. When it comes to the claims to be careful not to hurt religious feelings, those claims are often made by certain religions and their spokesmen. Christianity and Islam are two of them. And more often than not even non-believers agree that one should be careful about criticising and mocking religious beliefs, especially when enough religious people run riot. The more aggressive the reaction, the more likely people are willing to support the claim of censorship in order not to hurt religious feelings.

Interestingly, humanists like me aren't treated with the same caution. I haven't heard any claims that sentences like "But for the cowardly and unbelieving and abominable and murderers and immoral persons and sorcerers and idolaters and all liars, their part will be in the lake that burns with fire and brimstone, which is the second death." (Bible, Revelation 21:8) or "Fight those who do not believe in Allah or in the Last Day and who do not consider unlawful what Allah and His Messenger have made unlawful and who do not adopt the religion of truth from those who were given the Scripture - [fight] until they give the jizyah willingly while they are humbled." (Quran, Sura 9:29) should be deleted because they hurt the feelings of unbelievers.

As I said before, I wouldn't claim that these verses should be deleted, anyway, as long as I have the right to discuss them critically and live my life in freedom without having to follow the rules of a God and a religion I don't believe in. That said, I don't expect any believers to like the caricatures made by, for instance, Charlie Hebdo. Of course they also have the right to discuss them critically. Or not to look at them if that would hurt their feelings. But self-censorship in order not to hurt religious beliefs in my opinion is the wrong way for a democratic society that wants to defend freedom of speech.

@ Bob S: As an addendum to what Kaelah wrote, there is one interesting point often overlooked.

Whether or not Islam prohibits images of Muhammad is not clear, but a matter of debate among Muslims. The Quran does not explcitly forbid images, it merely forbids the worship of images (idolatry). Some writings of the later tradition forbid images specifically, but they are not universally agreed on.

Images of Muhammad (usually in manuscript illustrations) exist in Islamic art since the 13th century until the present. And when a Muslim group protested against a sculpture of Muhammad inside the U.S. Supreme Court, Islamic scholar Taha Jaber al-Alwan decreed that this was not a problem for Islam, but "a noble gesture".

The radical prohibition of images is a rather recent phenomenon, a prduct of the fundamentalist version of Islam which has been gaining influence since the late 20th century. But it can't claim authority in the Quran or in Islamic history.

Like so many other religious issues, then, the question of images in Islam is a matter of interpretation. And even if it was clear-cut, it would not and should not matter to non-Muslims: in a secular society, believers have every right to observe their own religious rules (as long as they conform with the laws of the secular state), but they have no right to force these rules on non-believers.