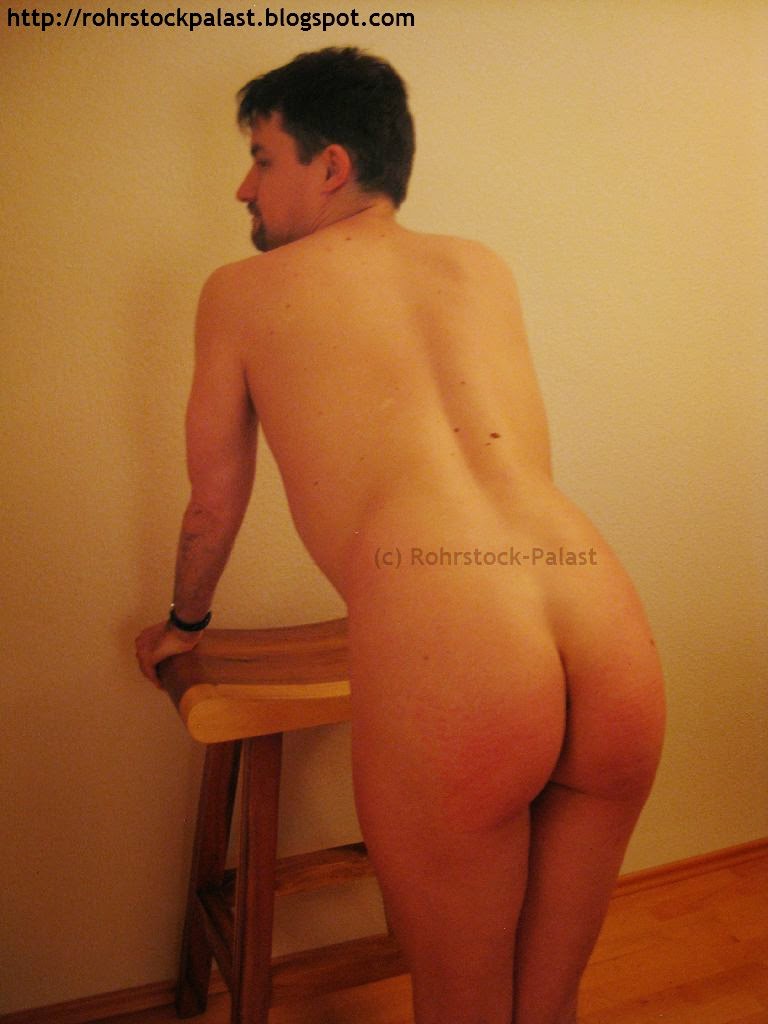 Back in June, our reader Simon, Kaelah and I made bets on the Football World Cup, predictably resulting in sore bottoms for everyone involved. Simon already wrote a guest post about his part of the betting results, a long and hard 57 stroke caning (rounded up to 60 strokes by Simon's mistress). I didn't get it quite so bad. I had volunteered to take one stroke with our nasty rubber flogger for each point I did not get in the bet. A maximum of 60 points was achievable and I got 17 points with my correct predictions, so I ended up with 43 strokes. Still a respectable thrashing. [Comment from Kaelah: Ludwig is quite used to ending up with a sore bottom after a bet, so 43 strokes with our nasty stinger don't seem to shock him anymore.]

The rubber flogger is an implement Kaelah and I bought in a gay sex shop. I suppose gay kinksters are mighty tough, because it is one wicked little implement. Those rubber tails sting like hell. [I can confirm that. I was the first one to regret we bought that nasty thing.] The flogger features prominently in a roleplay scene we once did which Kaelah described in her post The First Cut Is The Deepest. We rarely used it on video, though. The only scene we filmed where we used it extensively was the football bet with Leia Ann-Woods, where Kaelah gave me a back whipping with it. As a matter of fact, that was the only time I ever received the flogger on video or in private, except for a few tryout strokes. I was curious how it would feel to get an extended bottom whipping with it, so that was my wager for the World Cup bet. [Obviously your previous experience with the back whipping didn't cure you from your curiosity. But maybe that's only because too much time has passed since we filmed that football bet clip.]

Earlier today, I bent over our new whipping bench and Kaelah went to work. She gave me ten strokes with the forehand followed by ten with the backhand, then four segments of five alternating between the forehand and backhand, and finally the last three strokes forehand, backhand, forehand. [I have to admit I am proud that I can handle the flogger rather well with both my forehand and my backhand nowadays. In my view it is almost more difficult to apply accurately than a cane.] Interestingly, the backhand hurt more, probably because I am less used to that side. [Ludwig counted for me. After the first three strokes with the backhand, he counted "three". - "Three? That means there are still 40 strokes left," I told Ludwig. I was quickly reassured that what he meant was three backhand strokes and 13 strokes in total. For a moment I thought about restarting at three. But since I am such a nice person and all... Ludwig's slight nervousness after my remark was fun, though!] 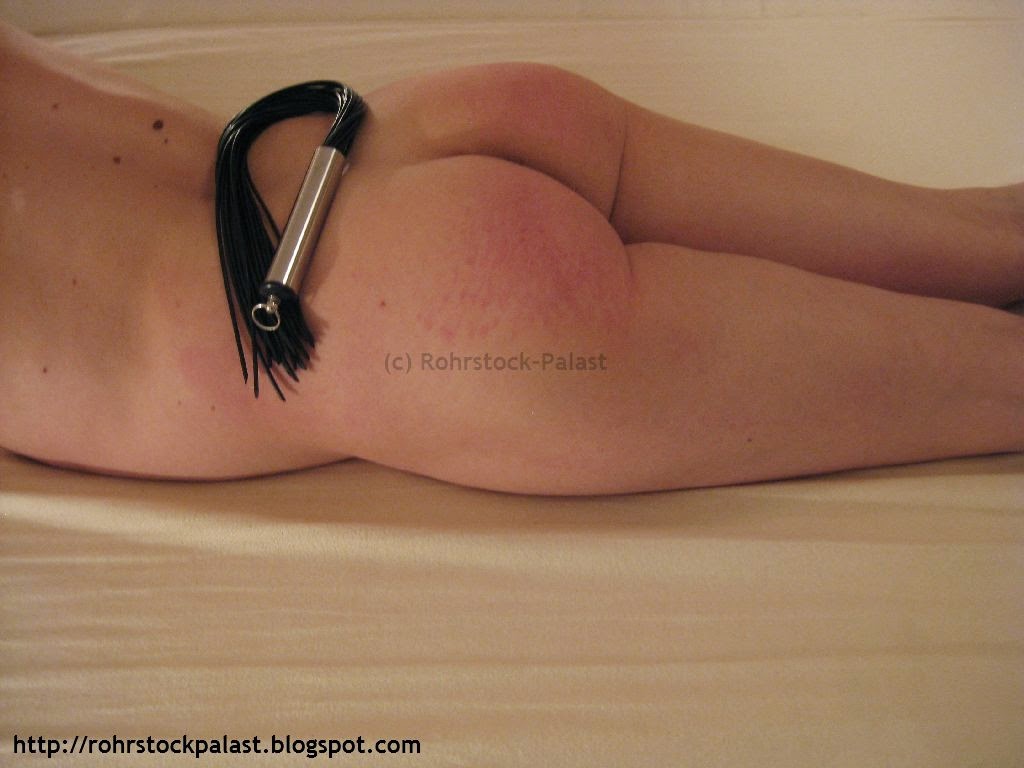 All in all, it wasn't as bad as I had anticipated [good to know, I will remember that comment the next time], but I still squirmed more than usual. Kaelah was quite pleased with that, teasing me: "This would have been a fun video!" Alas, you only get to see some pictures of the results. [I very much liked Ludwig's reactions. Interestingly, they were more lively than his reactions to a severe caning. He moaned and wriggled his bottom to ease the pain. There was also some giggling and surprised glances which I enjoyed immensely. I giggled, too, at one point, and Ludwig told me: "That's not funny!" My reply: "It is, at least from my point of view." It definitely was a delightful little scene.]

In conclusion: the rubber flogger is a perfect implement if you want to cause a significant amount of pain while causing almost no damage. It hurts a lot, but the only visible result is a mild reddening of the skin, maybe a faint red stripe or two. Ideal for people who want to play with it every other day. For the same reason, it is one of the worst possible implements for taking pictures or making a video. I have almost nothing to show for my suffering. Would you believe me if I told you that the flogging today hurt almost as much as the caning from our recent Tit For Tat video? Compare the welts from that one with the barely noticeable reddening in the pictures here. It's ridiculous.

Still, it was a nice little scene to do [agreed!], and I hope you do enjoy the pictures even if there are hardly any marks to see.
Posted by Ludwig at 10:59 PM

Another great post, I was beginning to think you had both cunningly forgotten our World Cup bet, but your description makes it clear that your forfeit was paid in full. My Mistress does not own a flogger such as you describe, which from the post I think I'm grateful for, but it certainly sounds painful. For me the fact that it doesn't leave marks is a drawback. My Mistress enjoys admiring her handiwork and if there are no marks I suspect she would just increase the dose, I also enjoy the marks and sometimes just catching sight of them a few days latter can bring back delightful memories.

Wishing you a Happy New Year.

Simon - glad to see you posting here. Have you seen my comments on your October post (added within the last few hours)?

@ Simon:
A Happy New Year to you as well. :-) I was certainly disappointed when we used the flogger for the very first time and almost didn't leave any marks but hurt as hell! As a top this also has its advantages, though. Ludwig marks quite severely and I sometimes am a bit cautious with the cane when I see the big purple welts the cane produces. With the flogger I don't have to hold back...