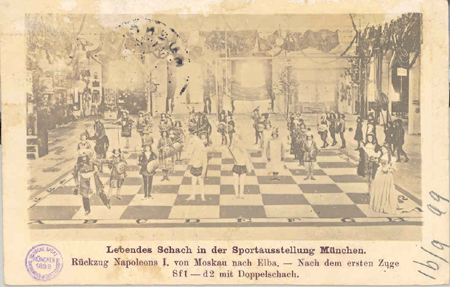 "Human chess in the Sports Exhibition Munich",
a German postcard from 1899


Chess, the game of kings. I have always been intrigued by it, and not just because I took my blogging name from the mad fairy tale king of Bavaria (who, to my knowledge, was not a chess aficionado). In my teens, I used to play in a chess group in school. It is such a fascinating game. The rules are beautifully simple - anyone can learn them in a matter of five minutes, even if they have never heard of the game before. And yet, the thirty-two pieces of the two opposing sides, with six different types of pieces and on a board of eight by eight squares, make for a game of such complexity that it takes a lifetime to master. Actually, few people ever master chess even if they play their entire life. I admit that I am a semi-decent, but by no means a good chess player myself. I have not played much since my school days and am woefully out of practice. But I am still fascinated by the game.

The reason for my bringing up the subject is that I read an article about human chess the other day. It is a form of chess where people take the place of the pieces. You may have seen it as a theme in movies like Mel Brooks' History of the World, Part I (in a parody of aristocratic life) or Harry Potter and the Sorcerer's Stone ("wizard's chess"). According to the article, human chess is first documented in the 15th century, but it may have been played during the earlier European middle ages already. Stories about Turkish sultans playing matches of human chess where every taken "piece" was executed, and of cruel Spanish inquisitors or the Russian czar Ivan the Terrible playing for the lives of real people, are probably urban legends. What is certain is that human chess was a popular pastime at the royal courts of early modern times. The absolute monarchs of the era had the money and the personnel to organize matches with enormous material effort. Gardens and parks were redecorated as giant chessboards, servants put into lavish costumes to act as the pieces. It must have been quite a sight.

It occurred to me that it would be a lot of fun to play a spanko version of human chess. I don't have to spell out to you what would happen to a piece that gets taken! The losing player would also get a proper thrashing after the match. Or both players a minor thrashing if the match ends with a draw. Of course, if you wanted to represent all the pieces with people, you would need a total of thirty-four people: thirty-two pieces plus two players. Or a total of thirty-two if the players take the place of the kings. In any case, that would be difficult to organize even at a large event like the Shadowlane party. But wouldn't it be awesome? The kings of both sides would, naturally, get a majestic implement to use, maybe a richly decorated cane. The queens, something equally painful - maybe a single tail whip? The rooks should be equipped with something blunt and bludgeoning, like a big wooden paddle. For the knights, a riding whip or crop seems the natural choice. I'm unsure about the bishops - maybe some kind of flogger would serve them well, "penitentiam agite" and all that? The pawns, as the most lowly pieces, would use their bare hands to spank the other pieces they take.

Or maybe it should be the other way around, with the lowly pieces getting the more intimidating implements, because it should sting more to be taken by a lowly piece? That would work as well. I'm sure we could come up with a nice set of rules and customs for the spanko version of human chess. Oh, and once you take unorthodox chess variants like hexagonal chess or four player chess into account, the possibilities really become limitless...
Posted by Ludwig at 4:26 PM

Ludwig, neat idea, for sure. I agree with you - it might be a challenge to assemble enough folks to play the game, even at a spanking party. However, aspects of the game can be tuned to attract more than just spankos into the game: the rooks suggest capture and imprisonment, not only paddling. (Where do you store those captured pieces?!) Knights as well as the foot soldiers carry lances and swords, hence needle play possibilities. Bishops can contribute especially richly, just think of the Inquisition and its possibilities. I see knights carrying not only horsewhips but also those maces with a chain, maybe that would be a bit too extreme, arsenal-wise; but they do wear a helmet, so some folks might be atrracted to a mask or blindfold... Still, I would not disarm the pawns - being simple folk, peasants really, they would carry not only freshly cut switches, but their pitchforks and threshing tools as well. As you observed Ludwig, possibilities are endless in chess.
Kings and queens, though, usually have people who do the physically-oriented actions fo them, so this notion suggests and alternative: drop th hardware altogether (no implements), but authorize the rooks only to administer the penalty in a set number of whacks, depending on who captured whom. If both your rooks are taken, you can't beat your opponent anymore, this would be another rule. (If this happens, you are probably beaten anyway. ;-))
A new rule migh tbe introduced, where one could "ransom" his or her captured pieces by either taking strokes him/herself, or having the captive receive strokes in return for liberty, but only if they want to reenter that particular game.
Another possibility is as follows: if only a small number of players is available, and not 32, how about setting up plays such as those of the chess problems that they used to have in newspapers and magazines, where you only have a few pieces, and the solution is one of skill and experience? Or, famous plays from famous games of past champions?

@ Val: Wow, a lot of ideas, and all of them intriguing. I hadn't thought of covering different kinks, in addition to spanking, with a human chess game like that, but of course that is possible. Playing out chess problems where you need a lower number of pieces / participants to begin with is also an interesting thought.

Very interesting idea! That would probably get me into chess. ;-)

Thank you Ludwig and Val for getting me out of a writer's block.

I am writing a story which got stuck because I did not find a suitable end for spankos enyoing themselves in the park of a scottish castle. Now, I can incorporate a game of chess with live pieces. Bingo, that leaves all kinds of lose ends open.

Of course, in reality, it would be difficult to play a full game with all pieces, however, Val's idea of doing chess problems, can be realized easly. I am thinking of organizing this on one of our Munich spanker's meetings. It can even been played in public on a big community chessboard. What happens afterwards then, is another matter.

@ Donpascual: You are most welcome. It does sound like an intriguing ending to a spanking story.

you have nice Dreams Donpascual ...
But life your Dreams!